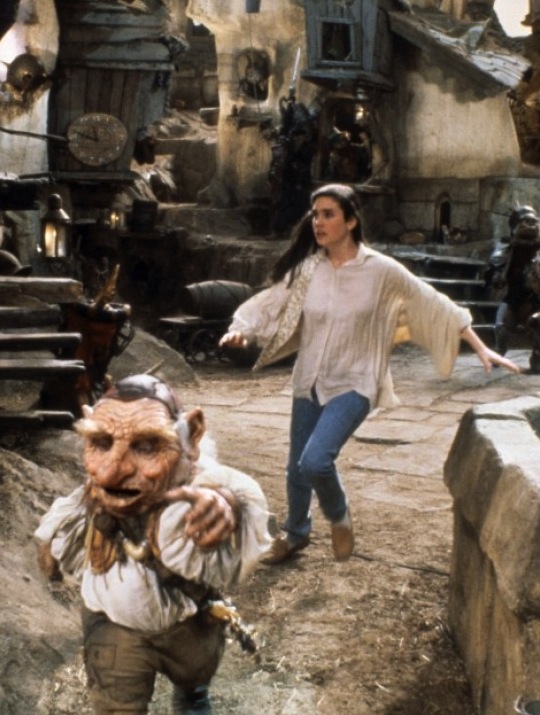 On a quest to rescue her baby brother, Sarah (Jennifer Connelly) pursues the dwarf Hoggle through the streets of Jim Henson's Labyrinth.


Oz among a Labyrinth of influences


Yes, it turns out there is a Canadian connection to Jim Henson's 1986 fantasy feature Labyrinth. In a personal diary entry dated March 28, 1983, Henson wrote "Dennis Lee - Brian F. and I begin talking about Labyrinth in London." Brian F. was, of course, Brian Froud, the British conceptual artist with whom he'd collaborated on his first non-Muppets feature, The Dark Crystal. Dennis Lee was the poet and song lyricist who worked on all 96 episodes of Henson's 1983-87 television series Fraggle Rock, which was produced out of Toronto's CBC-TV studios. The Jim Henson's Red Book website tells us that "Lee produced a “poetic novella” outlining a coming-of-age story set in a Froudian world of goblins, hairy beasts, and animated masonry. This time, humans were central to the story, which was drafted into script form by Terry Jones and Laura Phillips." The Toronto-born Lee's name is familiar to generations of parents who delighted in his children's books (among them 1974's Alligator Pie and 1977's Garbage Delight), and even read them to their kids. Reeling Back takes great pleasure in recalling Labyrinth, and thanks PMW for the request.

Wednesday, July 2, 1986
LABYRINTH. Written by Terry Jones (with uncredited contributions by  Elaine May), based on a story by Dennis Lee and Jim Henson. Music by Trevor Jones, with songs composed and performed by David Bowie. Directed by Jim Henson. Running time: 99 minutes. General entertainment. SARAH (JENNIFER CONNELLY) thinks she has problems. A  girl on the edge of womanhood, she dislikes her father's new wife (Shelley Thompson) and hates her infant brother Toby (Toby Froud).
Tonight, she's been left to babysit the squalling brat. "I wish the goblins would come and take you away," she says in a moment of imagination-tinged frustration. "Right now! "
And they do.
The moment Sarah steps out of the room, the noisy child disappears into the Goblin King's castle in the heart of a fairy tale Labyrinth.
Having granted her wish, King Jareth (David Bowie) can hardly believe that she wants it back. A sporting fellow, he gives the distraught girl 13 hours to find her way through his magic maze to reclaim Toby.
And now Sarah has a real problem.
Four years ago [1982], Jim Henson realized that he had a problem. In an ambitious attempt to extend the boundaries of animated storytelling technique, the Muppet man produced a special effects feature called The Dark Crystal.
Set in a world populated entirely by fur-and-fabric fantasy creatures, the picture was an uninteresting quest tale, full of generally glum characters involved in a ploddingly grim plot. There was nothing real to which an audience could relate, and little sense of fun.
The Dark Crystal was an expensive failure. Based on what he learned from the experience, Henson developed the Labyrinth project, a fabulous, fully-realized family feature that has no problems at all.
Inspired by Alice (of Alice in Wonderland) and Dorothy Gale (The Wizard of Oz), Sarah is an attractively self-possessed child-woman on a purposeful journey. Like Alice, she is at large in a land where the logic is decidedly north-by-northwest.
Like Dorothy, she acquires an assortment of fantastic friends, whose loyalty and special skills help her through Jareth's magical domain. As played by Jennifer Connelly (whose portrayal of the young Deborah stole the show in Sergio Leone's 1984 epic Once Upon a Time in America), Sarah is a contemporary teen with a timeless appeal.
This time, the Muppet team's ingenuity is turned loose on an adventurously cheerful concept. Terry (Monty Python's Flying Circus) Jones's screenplay is punctuated by five songs by David Bowie, each one performed as a production number within the film's unfolding story.
Rooted in the polished vaudevillian traditions of television's The Muppet Show, Henson's current release is a big screen treat from beginning to end. Superb General-rated entertainment, his Labyrinth is also one of this year's best films.

Afterword: A financial failure, Labyrinth was Jim Henson's last feature film. He died unexpectedly in 1990, just as the picture was achieving cult status. Its sales success on DVD prompted the Jim Henson Company to produce the 2005 feature MirrorMask, written by Neil Gaiman and directed by Dave McKean. Originally conceived as a sequel, it evolved into a picture that was merely "in the spirit of" Labyrinth.
As Sarah, Jennifer Connelly gets to deliver the familiar teen-ager's complaint: "That's not fair!" As Jareth, David Bowie offers the response every parent wished he'd thought of first: "You say that so often. I wonder what your basis for comparison is?"  Since Labyrinth, Connelly has starred in more than 30 feature films, collecting the 2002 best supporting actress Oscar for putting up with co-star Russell Crowe's antics in A Beautiful Mind. Her mainstream dramatic performances notwithstanding, she is beloved of science-fantasy fans for her portrayal of Cliff Secord's girlfriend Jenny, in 1991's The Rocketeer; for playing fugitive John Murdoch's confused wife Emma, in 1998's Dark City;  as Bruce Banner's brainy girlfriend Betty Ross, in 2003's The Hulk; and, during a working visit to Vancouver, for astrobiologist Helen Benson, Klaatu's human guide in 2008's The Day the Earth Stood Still remake.