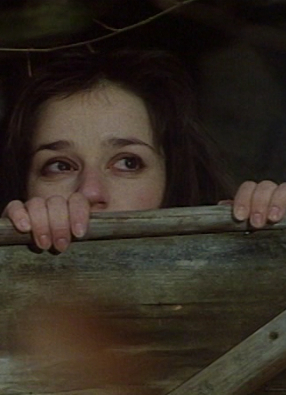 Schoolgirl Sonya Rosenberger (Lena Stolze) is relentless in her pursuit of truth in director Michael Verhoeven’s 1990 feature The Nasty Girl.

In search of the truth


Fire engulfed Berlin’s Reichstag on this day (February 27) in 1933, and Adolf Hitler used the arson as his pretext for taking dictatorial power. What happened in Germany in the years that followed are the obsession of director Michael Verhoeven’s The Nasty Girl (1990).

THE NASTY GIRL (Das schreckliche Mädchen). Based on the life of Anna Rosmus. Music by Lydie Auvray, Billy Gorlt, Mike Herting and Elmar Schloter. Written and directed by Michael Verhoeven. Running time: 92 minutes. In German with English subtitles. Rated Mature with the warning "occasional nudity and coarse language."
RATE IT FIVE STARS.
And, yes, The Nasty Girl is one of the best — if not the best — films of 1990.
I say this up front because, frankly, the picture's advertising campaign lacks mass appeal. Instead, there's an emphasis on film festival awards, and the quote "a wicked black comedy."
Veteran filmgoers will immediately translate that to mean "uncommercial, weird but not very funny."
Then there's that title.
The Nasty Girl.
Sounds a bit wimpy, doesn't it?
It could be anything from a softcore sex exploitation film to a new Care Bears cartoon.
The truth is, we're dealing with something utterly original, a movie that marries the cinema of conscience with satirical cabaret to come up with an entertaining new kind of youth movie.
Truth is at the heart of it. Schoolgirl Sonya Rosenberger (Lena Stolze) believes in it.
She must deal with the sad fact that most of the adult population of her post-Second World War Bavarian home town wants to suppress it, and her.
A good student, Sonya received a silver medal and a trip to Paris for her 1976 essay on "Freedom in Europe." In 1978, she hopes to win again, this time with the topic "My Home Town During the Third Reich."
A bit of a brat, but no real troublemaker, she plans to tell the heroic story of how the town of Pfilzing "resisted the Nazis, especially the Church."
The daughter of devout Catholic schoolteachers — Mom (Monika Baumgartner) teaches religion; Dad (Michael Gahr) teaches history — Sonja begins her research with a visit to Uncle Franz (Fred Stillkrauth), vicar of the local cathedral.
"I'd like to show how the Church kept its integrity under the Nazis," she announces.
Did I hear a groan?
Veteran filmgoers will be relieved to know that writer-director Michael Verhoeven's picture makes a clean break with the established tradition of German war-guilt movies. This is not one of those angst-ridden epics that always seem to star Maximilian Schell.
Verhoeven's film plays more like a teen rebellion comedy. Wonderfully subversive, his picture opens with the adult Sonya talking directly to the camera, a young woman very much in charge of her life.
Guilt is not a consideration for her. Born into the brave new world of emerging European unity, she introduces herself as a girl who just wants to have fun.
No drudge, she enjoys classroom pranks, and accepts the advantages that a mildly corrupt educational system confers upon her. Together with her schoolmates, she plays a mean game of "sink the sub."
Her interest in the past is piqued only by the desperate importance that her elders seem to place on repressing it. "You have to know where things come from to know where they're going," she says.
Its ads notwithstanding, The Nasty Girl is a movie with real appeal for ordinary teens. Sonya, like recent characters played by Winona Ryder and Christian Slater, can't get no satisfaction.
Unlike Hollywood's hollow rebels, though, her goal is not sexual ecstasy or playing in a rock band. Like real teens, she is brimming over with energy, creativity and an innate sense of social justice which she brings to bear on the problem at hand: adult hypocrisy.
Credit Verhoeven with understanding that filmgoers are entitled to have fun, too. He shows that humour abounds even in the most serious situations.
Credit Stolze with an Oscar-worthy performance. The 33-year-old actress plays Sonja from age 12 to 25, and is thoroughly convincing the entire way.
Together, they've produced one terrific movie, a picture that combines brilliant, brassy technique with thought-provoking material.
*    *    *
KIN FLICKS — Despite the similarity of names, Nasty Girl director Michael Verhoeven is not related to Holland’s Paul (RoboCop) Verhoeven. Born in Berlin in 1938, he is one year older than the Dutch filmmaker. Adding to the potential confusion is the fact that Michael is the son of a German actor and director named Paul Verhoeven.

Afterword: The Nasty Girl was based on the true story of Anna Rosmus, whose unrelenting dedication to the truth was chronicled in a number of television documentaries in Germany in the late 1980s. With notoriety came increasing harassment, and even death threats, resulting in her emigration to the United States. A writer, researcher and frequent lecturer, she will be present at Bard College's Hannah Arendt Centre in New York a week from today (March 5, 2020) for a screening of The Nasty Girl, with a discussion to follow. I wish I could be there.
Rereading my 30-year-old review, I was overwhelmed by the many thoughts and emotions it provoked. “Truth is at the heart of it,” I wrote at the time. The movie’s heroine finds Truth embattled, and comes to its defence. A combination of Nancy Drew and Lois Lane, she persists. And the Truth? It remains embattled, perhaps more so today than at any time in recent history. An old newspaperman, I’m saddened by the collapse of the business model that once made a press lord value journalism, our traditional guardian of factual reporting. The depredations of corporate concentration have all but destroyed public trust in Canada’s print media. The U.S. still smugly proclaims its “freedom of the press,” but as “the press” morphed into “the media,” it became ever more clear that constitutionally protected freedom is no guarantor of Truth. In its pursuit of profit, a “free” media can promote fake news, advocate for questionable causes, promote injustice and lie like a rug for the benefit of corporate interests determined to preserve the status quo. Which brings us to the ongoing coverage of the 2020 election in the U.S., a war in which the first casualty already is the Truth. All but ignored is the single greatest issue facing mankind: environmental collapse. Person of the Year (and heir to the Nasty Girl mantle) Greta Thunberg is the teen heroine telling the Truth today. Please listen.