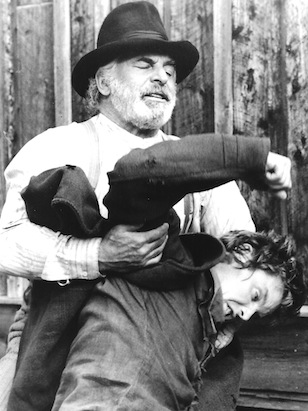 In the grip of temptation


Having fun with B.C. history


Born in Toronto on this day (February 14) in 1956, Tom Burlinson learned to ride in Australia, where he starred in the two Man from Snowy River movies. His equestrian skills were on display in B.C. during the making of his only Canadian feature, 1991's The Legend of Kootenai Brown.

Friday, September 27, 1991.
THE LEGEND OF KOOTENAI BROWN. (U.S. release title: Showdown at Williams Creek). Written by John Grey. Music by Michael Conway Baker. Directed by Allan Kroeker. Running time: 100 minutes. Mature entertainment with the B.C. Classifer's warning:  "occasional nudity, violence and coarse language." RAYMOND BURR HAS FUN with it.
As Thomas Jefferson Webster, he is the American judge who presides over the trial of John George "Kootenai" Brown (Tom Burlinson). The law in Montana's Fort Benton, Webster has no patience with a violent Irishman from Britain's Northwest Territories.
Since the passing of Orson Welles, Burr has become the screen's biggest Big Man. His mountainous presence and precise, rumbling voice easily convey the Establishmentarian values and Old Testament authority of a character like Webster.
Burr knows it and, in The Legend of Kootenai Brown, the New Westminster-born actor plays it to the serio-comic hilt.
Donnelly Rhodes has even more fun with it.
As Eben "McTooth" Campbell, he is the perfidious Scotsman who leads a guileless Brown into temptation in the pre-Confederation colony of British Columbia. A con artist always working an angle, the charmingly loathsome McTooth smiles and smiles and is Brown's personal villain.
Best known locally as Danger Bay's goody-goody aqua-vet Grant Roberts, the Winnipeg-born actor steals the show with his McTooth — a deft combination of twinkling eyes, haggis-breath accent and progressively scruffier schemes.
Indeed, as written by the puckish John (Billy Bishop Goes to War) Gray, The Legend of Kootenai Brown is more the legend of the marvellous McTooth. Though inspired by an historical personage (Brown), the film's fictional creation, broadly conceived and even more broadly played, is the most successful character.
Burlinson, unfortunately, isn't in on the joke.
As Brown, a stalwart ex-army officer hoping to make his fortune in the Williams Creek gold rush of 1863, he is sincere, soulful and deadly serious.
A Toronto-born Aussie — he starred in the two Man from Snowy River pictures — Burlinson plays Brown as a man in search of purpose and serenity in a corrupt world. He finds love, and something like community, among the buffalo-hunting Metis led by Gabriel Dumont (Alex Bruhanski).
With great regularity, though, McTooth reappears in his life, always with a new key to riches, often encumbered by a new prosthetic body part. Despite the disastrous outcome of their every involvement, Brown never quite catches on.
Given the credulity of the character, some deliberate comic colouring might have been in order. As it is, Burlinson's Brown comes across as dogged and dim rather than heroic.
The same could be said of Allan Kroeker's direction. It's as if the Toronto-based television director couldn't decide between CBC-style docu-dramatics or going for the gusto of a flat-out frontier comedy.
An uneven effort overall, his picture does manage to showcase the range of Vancouver's production and performing talent. From composer Michael Conway Baker to supporting player Stephen E. Miller, there's real quality in the mix.

Afterword: Tom Burlinson quite literally rode to fame in 1982's The Man from Snowy River. The film's publicity made much of the fact that the Canadian-born Australian television actor had never ridden a horse before being cast as ranch hand Jim Craig, and had "only a few short weeks" to become credible as a cowboy. His feature-film debut, the picture was a major success in Australia and was picked up by Twentieth Century Fox for U.S. distribution. A year later, Burlinson's equine empathy won him the starring role in Phar Lap, the story of Australia's most famous race horse. In 1985, he travelled to Spain to co-star with Rutger Hauer and Jennifer Jason Leigh in director Paul Verhoeven's first Hollywood-financed feature, Flesh+Blood. My own positive review notwithstanding, the picture did not do well at the box office. With the exception of his visit to B.C. to make The Legend of Kootenai Brown, and a brief stay in the U.K. for the filming of the 1988 mini-series Piece of Cake, Burlinson has made his career down under, on the Australian stage, screen and in its television industry.
Barkerville, located in B.C.'s Interior on the west bank of Williams Creek, is north-northwest of the Kootenay (sic) River region from which the historic Kootenai (sic) Brown borrowed his name. It was built during the 19th-century Cariboo Gold Rush. In 1958, as part of B.C.'s centennial celebration, it was restored as the tourist attraction known as Barkerville Historic Town. Other films that used it for location shooting were Jack London's Klondike Fever (1980), Harry Tracy, Desperado (1982) and Call of the Wild (1993).