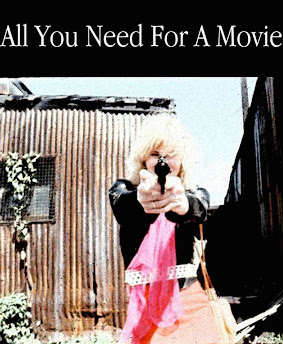 In the mind of the artist


Arriving in Vancouver in 1968, experimental filmmaker Al Razutis became part of a vibrant cinema-arts scene. Born on this day (April 28) in 1946, he summarized his views on “industrialized Western culture” in the selection of shorts making up 1983's feature-length look at Amerika.

Thursday, October 20, 1983
AMERIKA. Original music by Tony Giacinti. Conceived, written and directed by Al Razutis. Running time: 161 minutes. No B.C. classification. Contains brief scenes of explicit sex. World premiere showing Friday, October 21, 1983 at 7:30 pm. in the Robson Square Cinema.
Incorporates the short films: The Cities of Eden (1976/79), Software/Head Title (1972/80), Atomic Gardening (1981/83), Motel Row (1976/81/83), Refrain (1982), 98.3 Khz: Bridge at Electrical Storm (1973), Wasteland and Other Stories (1976/79/81), The Wildwest Show (1960), A Massage from Our Sponsor (1979/80), Exiles (1983), The Lonesome Death of Leroy Brown (1983), [Fin] (l983), O Kanada! (1976/80/83). A BEGINNING IS MARKED by an end. A "work in progress" for nearly 11 years, experimental filmmaker Al Razutis’s Amerika will be world premiered in its final form Friday [Oct. 21. 1983] as part of the new Vancouver Art Gallery’s inaugural exhibition.
Begun in 1972, the compilation feature represents the German-born film artist’s attempt to create "a mosaic that expresses the various sensations, myths and landscapes of the industrialized Western culture.” At the same time, Amerika offers a look at the evolution of one man's inner vision, as well as an overview of a decade of development in non-narrative cinema.
The preview version screened for me Monday afternoon at Canadian Filmmakers Distribution West consisted of 14 shorts divided into 20 segments, with a running time of 161 minutes. By curtain time Friday, Razutis promises to add one more sequence to increase the running time to approximately three hours.
Unlike commercial movie producers, cinema artists are neither profit motivated nor bound by the story-telling conventions of entertainment features. Currently an associate professor of film at Simon Fraser University, Razutis approached his Amerika project "in the spirit of revolution and creation. Here, form and content are inexorably linked.”
During the lengthy period of production, Razutis seems to have gone through four distinct phases. In the first, from 1972-73, he was an artist alone with his art,  producing virtually abstract visual meditations.
His 98.3 Khz: Bridge at Electrical Storm offers a 13-minute crossing of the San Francisco-Oakland Bay suspension bridge. It takes its audience on a psychedelic “trip” with optically-printed light show effects presented "within a broadcast noise continuum.” Here is an example of self-absorbed playfulness, full of the filmmaker's own fascination with the possibilities of motion-picture technique.
Phase Two, represented by the 1976 short The Wasteland and Other Stories, combines some social comment with  technique. Razutis's camera, mounted on the dashboard of his van, has condensed three days of highway driving into 15 minutes of speeded-up photography that shows us a road to nowhere.
Phase Three, from 1976 to 1961, offers involvement and analysis. Material such as the pretty girl TV commercials and hardcore pornography featured in A Message from Our Sponsor is imaginatively juxtaposed to probe hidden meanings and stimulate thought.
In his most recent phase, begun in 1982, Razutis sets aside his “found” material — stock footage, landscapes, post-production effects — to put performers before his camera. Narrative, so earnestly eschewed in his pure art phase, is used to comment on the meaning of the overall work. Bits of a short called Refrain punctuate the completed feature.
Difficult to encapsulate in a brief review, the elements of Amerika provide a Rorschach test for viewers, as well as a glimpse into the mind of an artist. The premiere screening is free, Friday only in the Robson Square Cinema.

RAZUTIS, Al, filmmaker (b. 28 April, 1946, Bamberg, Germany). As a student of chemistry and physics at California Western University, he became involved with experimental film in 1967. He moved to Vancouver in 1968, where he joined the Intermedia artists' co-operative. Combining arts activism with technical innovation, he established the Visual Alchemy Studio in 1972, a production facility equipped with an animation stand, holography lab and B.C.'s first optical printer. A prolific avant-garde filmmaker and critic who used the movie medium to explore the workings of the unconscious, Razutis also taught at the Vancouver School of Art and was an associate professor of film at Simon Fraser University. In 1980, his film A Message from Our Sponsor, an analysis of the sexual subtext of the beauty industry,  became an artistic cause célèbre when it was banned in Ontario. It later formed part of his larger work Amerika (1983).

The above is a restoration of an Encyclopedia of British Columbia entry written by Michael Walsh originally published in 2000. For additional information on this archived material, please visit my FAQ.

Afterword: Amerika achieved considerable success in the rarefied world of art cinema. The iconoclastic Razutis returned to California in 1987 where, a year later, Kevin Philips of the Los Angeles Times reported that his "monumental, three-hour Amerika . . . may well be the most provocative and challenging experimental work to screen in Los Angeles this year. Between the Biblical quotes that frame it — "Let us create man in our image . . ." and "Let us start anew . . . East of Eden" — Razutis alternately dazzles and numbs, but winds up making us think critically about how the media has shaped our very notion of reality." Honoured with an LA Film Critics’ Award in 1988, Amerika is included in the permanent collections of a number of international cinema archives, including France’s Museum of Modern Art in Paris.
According to his Canadian Encyclopedia entry, he returned to B.C. in 1996 to live and work in the Gulf Islands. His website, at http://www.alchemists.com, brings the story up to date in his own words. Al Razutis turns 73 today (April 28).