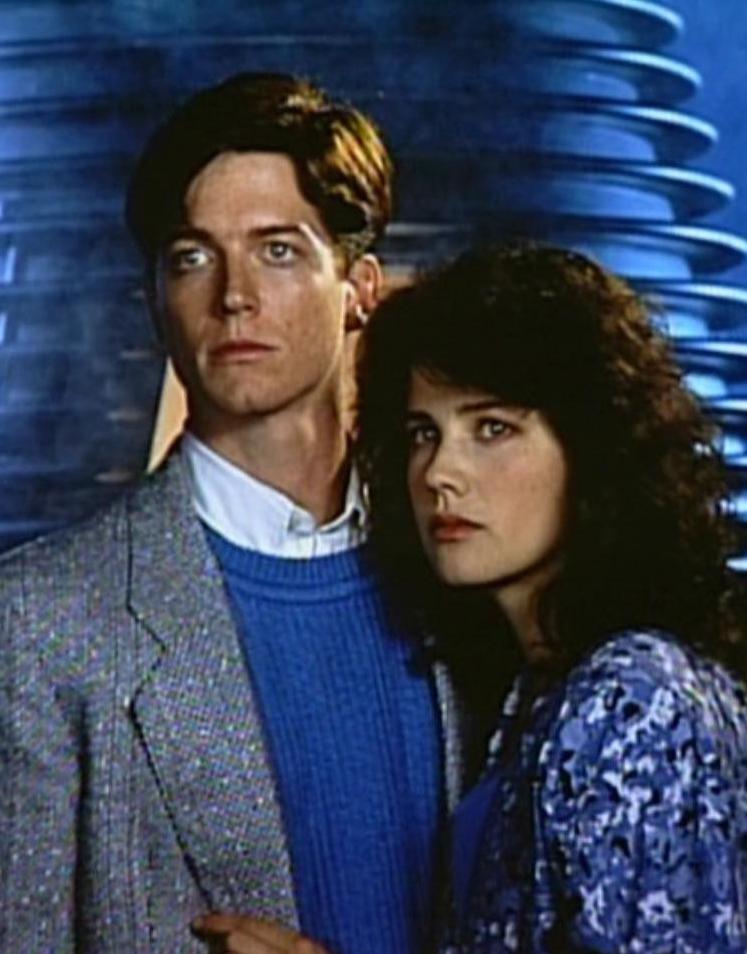 Insects in his gene pool

THE FLY II. Written by Mick Garris, Jim Wheat, Ken Wheat and Frank Darabont. Music by Christopher Young. Directed Chis Walas. Running time: 105 minutes. Restricted entertainment  with the B.C. Classifier's warning: some gory violence. MARTIN BRUNDLE (ERIC STOLTZ) doesn't remember his father. Mad scientist Seth Brundle (Jeff Goldblum) died shortly after his son was conceived. His mother, Veronica Quaire (Saffron Henderson) did not survive his birth.
According to Martin's self-appointed stepfather, industrialist Anton Bartok (Lee Richardson), the boy is heir to a rare disease. A genetic disorder, it has accelerated the lad's growth rate and boosted his IQ.
It's best we don't remember The Fly (1986). Though conceived as a remake, David Cronenberg's moody, intelligent shocker became its own unique horror classic.
The Fly II, filmed in Vancouver last year, is neither intelligent nor unique. A standard sequel, its teen hero is less kin to Cronenberg than a son of Frankenstein.
Raised in the closed environment of Bartok Industries (filmed at Simon Fraser University and the Robson Square complex), super-bright Martin is invited to play with dad's old matter-transmission pods.
Right from the start, we know that Bartok is up to no good.
Another tale of bureaucratic betrayal, the committee-written screenplay is pointless and predictable. We know what's in store for Marty, and how pissed off he'll be when the inevitable occurs.
About the only ones in suspense are the kid and his computer programmer sweetheart, Beth Logan (Daphne Zuniga). Bright and self aware, she becomes his lover and then his ally in the race to save Marty from his insectuous heritage.
The directorial debut of make-up effects expert Chris Walas, The Fly II boasts little more than good looking gore.

Afterword: For no good reason I know of, Canada attracts flies. Although author George Langelaan’s 1957 short story The Fly is set in Lyons, France, the 1958 movie adaptation relocated the action to Montreal, and that’s where Hollywood director Kurt Neumann shot it. The 1986 David Cronenberg remake was, of course, filmed in the director’s home town, Toronto. And, as noted in the above review, its sequel The Fly II was shot on location in Vancouver.
Credited with being a founding member of the California-based Earth Communications Office, celebrity environmentalist Daphne Zuniga was among the guests last Thursday (October 24, 2019) at the Power Women Summit in Los Angeles. Though she made her film debut in a slasher film (as Debbie, the killer’s fourth victim in director Stephen Carpenter’s 1982 feature The Dorm that Dripped Blood), she’d prefer to be remembered for her comedy roles, including Princess Vespa in the 1987 Mel Brooks Star Wars parody, Spaceballs. In the 1990s, she moved on to television, with starring roles in such prime-time soaps as Melrose Place (1992-1996), American Dreams (2004-2005) and Beautiful People (2005-2006).
In 2010, Zuniga was back in Vancouver to star in the seasonal made-for-TV feature A Family Thanksgiving, filmed back-to-back with On Strike for Christmas. (A Family Thanksgiving earns its place in B.C. film industry history for being the first of 232 Hallmark “Countdown to Christmas" TV features made to date, most of them in shot in and around Vancouver.) The hard-working actress continues to make regular visits, adding Signed Sealed Delivered (2012), My Husband Is Missing (2016) The Wrong Babysitter (2017) and 2019’s Gates of Paradise to her local resume. Her latest, Christmas in Paris, is scheduled to go to air on December 8. Daphne Zuniga turns 57 today (October 28).