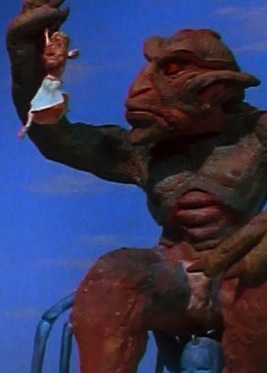 
Spoofing the sex implied in the serials

Thursday, November 14, 1974.
FLESH GORDON. Music by Ralph Ferraro. Written and co-directed by Michael Benveniste. Produced, photographed and co-directed by Howard Zeihm. Running time: 76 minutes. Restricted entertainment with the B.C. Classifier's warning: a very frank sex comedy. WITHIN THE FILM BUSINESS, opinions about Flesh Gordon differ wildly. William Rotsler loves it. Frank Segers hates it. The Academy of Motion Picture Arts and Sciences fears it.
Rotsler, a screenwriter and moviemaker, is the author of Contemporary Erotic Cinema: A Guide to the Revolution in Movie-Making (Ballantine; 1973). His book includes a rating guide and checklist of sexually-oriented pictures currently in release.
Although his list contains capsule comments on more than 150 films, only five earn top marks: a four-star rating. Among them is Flesh Gordon. Says Rotsler:
"Bill Osco and Howard Ziehm started out to make a porno version of the comic classic and then went completely mad, dropped the porn and went for broke with an utterly delightful film. Almost every figure model in Hollywood is in this one, along with superb costuming and sets, excellent special effects, great gags, fast pacing. Super camp!"
Frank Segers is a New York-based reporter and reviewer for the trade paper Variety. He saw the film four months ago [July, 1974]. His assessment:
"Puerile is the word for this softcore spoof of the sci-fi serials of the 1930s, which for their time, had genuine merit as audience hair-raisers. By attempting to combine sexplicity and low-level camp, pic emerges as an expensive-looking mishmash of obvious double entendres, idiotic characterizations and dull situations. Only compensation is flash of randy humor at the expense of a film genre still grist for the satire mill."
In 1972, AMPAS stopped giving Oscars for special effects. Instead of accepting nominations and conducting an open vote, Adademy directors declared a "special" award to The Poseidon Adventure.
The widely-held belief is that the reason for their decision was that the special effects in Flesh Gordon were too good to be ignored. The Academy found it easier to eliminate the category than give an Oscar nomination to an unrepentant porno producer.
And so Flesh Gordon arrives in Vancouver, a fabulous, fun-filled exercise in fantasy fulfilment. It is a film that quite literally kids the pants off the old serial superheroes. With deadly accuracy, it recreates what might have been if the libidinous little monsters in the Bijou balcony had been given full rein.
Return with us, then, to those thrilling days of yesteryear, a time when Chapter One introduces an imperilled planet and the world's press hangs on every word from wise old Professor Gordon (John Hoyt).
This time the problem is a mysterious sex ray, a beam of lust-inducing light that is turned on the Earth and is turning on the Earthlings. At this very moment, the elder Gordon reports, his son Flesh (Jason Williams) is returning from Tibet to aid in the defence effort.
Ah, but fate takes a hand. The sturdy tri-motor in which the intrepid adventurer is travelling is struck by the ray. Flesh meets his seatmate, the lovely Dale Ardor (Suzanne Fields), and together they bail out of the ill-fated aircraft.
They land near the home of eccentric genius Dr. Flexi Jerkoff (Joseph Hudgins). The brilliant scientist has just completed work on an interplanetary rocket.
"Gee, doc," says Flesh, surveying the ship's interior. "You got a lot of neat stuff. Did it take you a long time to put it together?"
Determined to save the Earth, the brave trio blast off for the planet Porno, source of the sex ray, there to do battle with evil Emperor Wang the Perverted (William Hunt), and his miscellaneous minions.
Anyone who delighted in the original Flash Gordon serials — there were three of them made between 1936 and 1940 — will experience real twinges of recognition looking at the current production. Ziehm and his partners have the feel of the characters and their universe down pat.
What they have done is to "dirty it up," bringing the implied sexuality of the originals to the fore. It is a ploy that finally provides an answer to the age-old question: "what was Dale Arden good for, anyway?"
Of course all of the conflicts on the planet Porno are expressed in terms of sexual fantasy. Wang, the ruler, is an outrageous degenerate; Amora (Nora Wieternik) is the besieged representative of romantic love; Prince Precious (Lance Larsen) leads the forces of limp-wristed tolerance.
In terms of overall attitude, Flesh Gordon is a happy, healthy film, one that should appeal to open-minded adventure fans of all ages. Although it's Restricted entertainment, B.C. does provide parents with the option of signing their under-18-year olds into movies so rated if that is their wish.
In this case, it's an option that should be considered. For reasonably modern parents — those who enjoy an open, honest relationship with their kids and are not squeamish about implied sex or lots of nudity — Flesh Gordon may be the perfect family film.
What makes it a worthwhile entertainment choice are the amazing special effects. Kids of all ages can take delight in the incredible creatures, the menacing machines and the fantastic world that has been created through a combination of animation, set design, model work and stop-motion photography.
Ray (The Golden Voyage of Sinbad) Harryhausen, the acknowledged master in the field, could hardly have done better. Had Flesh Gordon been in competition, the comparatively pedestrian effects in The Poseidon Adventure would have sunk without a trace.

Afterword: After all these years, I'm a bit surprised at my own brashness. There I was recommending (in a mainstream daily newspaper, no less), that progressive parents consider taking their offspring to a softcore sex comedy. In 1974, though, the popular culture seemed very much in tune with folkie Bob Dylan's 1964 observation that "The Times They Are a-Changin'." Three months before the above review was published, on August 9, 1974,  Richard Nixon resigned from the U.S. presidency, driven from office by the Watergate revelations. Four years earlier, the social fabric had been torn by the release of The Report of the Commission on Obscenity and Pornography. Established by President Lyndon Johnson to find a solution to "the problem of pornography," the panel's report defied its implicit mandate with findings that right-wing commentators called "a magna carta for the pornographers." Misunderstood and ignored by the Nixon administration, it had included among its serious and sensible recommendations "a massive sex education effort," a nationwide program that would prepare a new generation to regard sex as healthy and natural. Successfully opposed by Christian fundamentalists, the idea actually was embraced in some quarters, including the offices of prominent Roman Catholic publisher Herder and Herder. Its response was The Sex Book: A Modern Pictorial Encyclopedia (1971), a remarkable 208-page volume designed in "the spirit" of the commission's recommendations. My own remarks on Flesh Gordon were in the same spirit.
As mentioned in my later review of the 1980 Flash Gordon feature, the original Flash "was born on the morning of January 7, 1934, a new feature in the Sunday comics section. Created by Alex Raymond, he was all-American, right-thinking and instinctively noble." All of which made him an irresistible target for the great American satirist Harvey Kurtzman, founding editor of Mad Magazine. In the comic book's 11th issue (May, 1954), Kurtzman turned his best artist, Wally Wood, loose on his parody Flesh Garden! script. Four years later, in issue 10 of Kurtzman's short-lived Humbug (June 1958), the talented Jack Davis illustrated a sharply political Flyashi Gordonovich, Intergalactic Commissar. In December 1962, some 12 years before the Benveniste/Zeihm film Flesh Gordon, Kurtzman included the serial Flash as a guest star in his Playboy Magazine comic strip Little Annie Fanny. Another Mad  veteran, Will  Elder, provided the artwork.