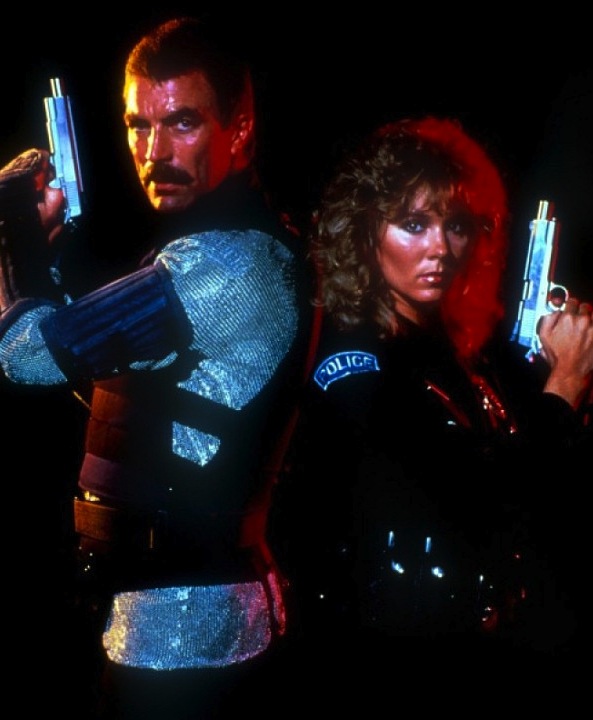 
Born on this day (October 23) in 1942, the multi-talented Michael Crichton wrote best-selling novels — he's considered the father of the techno-thriller — and directed science-fiction films, including the 1984 future-cop feature Runaway, shot on location in Vancouver.

Thursday, December 13, 1984
RUNAWAY. Music by Jerry Goldsmith. Witten and directed by Michael Crichton. Running time: 102 minutes,. Mature entertainment with the B.C. Classifier's warning: some violence, occasional nudity and suggestive scenes, some very coarse language. JACK RAMSAY (TOM SELLECK) is an acrophobe. Not only is he afraid of heights, but he wears glasses as well.
A cop who was a failure on the street, Ramsay works in the police department's Runaway squad. He deactivates defective robots.
Michael Crichton is a technophobe. A writer with a medical doctorate from Harvard, he specializes in tales of malfunctioning mechanisms.
After seeing his early nightmare novels The Andromeda Strain (book, 1969; film, 1971) and The Terminal Man (book, 1972; film, 1974) brought to the screen by other people, Crichton decided to become a filmmaker. He made his feature film debut with Westworld (1973), the story of a Disneyland-style theme park in which killer robots run amok.
This summer [1984], he was in Vancouver to make Runaway. His fifth feature, it is one of his standard day-after-tomorrow thrillers featuring an heroic professional saving the world from some horrific new technology. Here, Sgt. Ramsay is the one who discovers that some evildoer is programming household appliances to kill.
Together with his new partner, Officer Karen Thompson (Cynthia Rhodes), he sets out looking for Mr. Nutbar.
The villain of the piece is nasty-looking Dr. Charles Luther (Gene Simmons), "a rich kid gone bad.'' In the process, Luther has co-opted several weak-willed employees of Vectrocon Industries, a microchip manufacturer where progress is a particularly lethal product.
It's hard to believe that Crichton takes any of this seriously. As a director, he has really silly stuff — policewoman Thompson answering a runaway call to a construction site in high heels — undercutting moments of deliberate satire (a computerized police force using a psychic).
To his credit, screenwriter Crichton has given Selleck his best big screen role to date. As Ramsay, the TV star manages some real acting as he deals with a character battling personal flaws rather than his women.
Cast in the role of Future City, Vancouver continues to demonstrate a pleasing versatility. Viewed as a project that challenged local technical and performing talent to work quickly and efficiently, Runaway is a job well done.

The above is a restored version of a Province review by Michael Walsh originally published in 1984 For additional information on this archived material, please visit my FAQ.

Afterword: Writing came easily to the Chicago-born Michael Crichton, who published his first novel (1966's Odds On) while a student at the Harvard Medical School. Doctor Crichton conducted his early fictional practice under such pseudonyms as John Lange, Jeffery Hudson and Michael Douglas. In 1972, he adapted the last of his Lange novels (1972's Binary) as a screenplay, which he then directed as the made-for-TV movie Pursuit. In the 1990s, Crichton was best known as the creator of the 15-season television medical drama ER (1994-2009), and for providing Steven Spielberg with the novel and screenplay that became the Jurassic Park franchise. Though Runaway is hardly among his greatest hits, his 1984 Vancouver visit had personal significance for Crichton, because it was here that he met Toronto-born actress Anne-Marie Martin (her screen credit reads "Hooker at Bar"). She became his fourth wife (in 1987), the mother of his first child (in 1989), and his writing partner on the screenplay for Twister (1996). At 16 years, theirs was by far the longest of his five marriages. Crichton made a return visit to B.C. to direct reshoots for John McTiernan's 1999 feature 13th Warrior, the feature adaptation of his historical novel Eaters of the Dead (1976) in which he re-imagined the story of Beowulf. He died in 2008 at the age of 66.