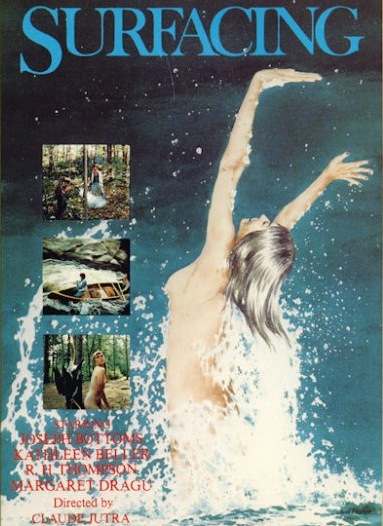 Lost in the north woods

Sunday, July 26, 1981.
SURFACING. Written by Bernard Gordon, based on the novel by Margaret Atwood. Music by Jean Cousineau and Ann Mortifee.  Directed by Claude Jutra. Running time: 88 min. Rated Mature, with the B.C. Classifier's warning "not suitable for children; some nudity, suggestive scenes and violence." A SMALL CONFESSION, PROMPTED by the world premiere here Thursday [1981] of Claude Jutra's Surfacing. I don't read much.
Not much fiction, at any rate.
In this business, it's not a good idea. Too many books get turned into movies.
I've always thought that a movie deserves to be seen on its own terms. The moviemaker's duty is to the audience, not the original author.
Movie critics have the same duty.
For me, that means seeing a film with as few preconceptions as possible. Since books, by their very nature, give away plot twists, provide character information and, in general, create expectations, I don't read much.
Such a policy does have its drawbacks. After viewing a picture like Surfacing, "from a novel by Margaret Atwood," I'm faced with a number of nagging little questions.
—    Could author Atwood's 1973 novel have been as dull and uninteresting as the film version?
—    Were her characters the uni-dimensional stereotypes portrayed here?
—    Was her book as pointless as the picture?
According to the authors of Novels and Novelists, an encyclopedic British "Guide to the World of Fiction," Atwood's novels are "social comedies with elements of fantasy and marked verbal wit. Her themes are the emotional interdependence of men and women, and their search for self-discovery and self-reliance."
Somebody should have explained that to U.S.-born screenwriter Bernard Gordon. Ignoring the fact that "surfacing" is an active present participle, he produced a screenplay that is inert; a surface that is flat, bland and obvious.
The film version opens with Kate (Kathleen Beller) coming home to her downtown apartment, an open-plan pad that looks like a cross between a recording studio and a well-to-do artist's garret. She's just learned that her father, a wilderness botanist, is missing and presumed dead.
Kate doesn't believe it. Dad was an experienced woodsman, she tells her live-in boyfriend Joe (Joseph Bottoms). She's going north to look for him.
We'll all go, says easygoing Joe. Her expedition promptly becomes a foursome, with Joe's older brother David (R.H. Thomson), a sexual predator, and David's wife Anna (Margaret Dragu) coming along for the ride.
I'm not sure what Atwood intended, but I know that filmgoers have been up this creek before. It's the old wilderness-as-crucible plot (explored with considerable impact in John Boorman's 1972 best picture nominee Deliverance, and exploited again in Peter Carter's 1978 Canadian variation, Rituals).
The tried-and-trite elements are all here. A pair of beer-swilling backwoodsmen (Michael Ironside and Larry Schwartz) turn up to leer at the women. Later they'll murder a moose, and terrorize the citified menfolk with their big guns.
Somebody has to fall off a cliff to create a medical crisis, of course. And don't forget the canoe ride down the river rapids. To show that Kate knows her woodsy lore (or, at the very least has seen The African Queen on the late, late show), there has to be a killer leech scene.
That Surfacing is a schlocker comes as a surprise. Director  Jutra is not an insensitive man. His 1975 feature, Pour le meilleur et pour le pire (For Better or Worse),  was a social comedy with all the elements of fantasy and marked verbal wit that my authors' guide attributes to Atwood.
Here, though, he appears to have phoned in his direction from Montreal's Home for the Terminally Disinterested. A capable cast, left in the woods to fend for itself, follows through as best it can.
The problem for players and picture-goers alike, is that Surfacing gives us so little to work with. Unlike Gilles Carle, (whose 1973 feature La Mort d'un bucheron sent Carole Laure on a wilderness search for a lost father), Jutra provides no build-up and offers little background to support the character conflicts presented in his movie.
Given the talent assembled for the project, Surfacing is a major disappointment.


*    *    *
SPEAKING OF GILLES CARLE, let me once again recommend his  adaptation of Les Plouffe (The Plouffe Family), a 1948 Canadian novel that seems to have genuinely inspired its filmmaking team. The epic-length drama, in French with English subtitles, currently [July 1981] is on view at the Varsity Theatre.


*    *    *
AMONG THOSE PRESENT FOR the Surfacing premiere were Charlton Heston, his son Fraser and daughter-in-law Marilyn. When Heston's name was announced, a young woman in the balcony stood up, hoping for a glimpse of the Oscar-winning actor. A look of shock and delight lit up her face a moment later when Heston rose to his feet from a seat in the row directly in front of her.

Afterword: In a brief conversation following the Surfacing premiere, Charlton Heston explained to me that he'd come to the screening to look at the work of cinematographer Richard Leiterman. Heston was looking for a Canadian director of photography for a film he was planning to make in the Vancouver area. At the time, Heston had more than a passing connection with British Columbia. On May 31, 1980, the actor had visited our city for his only son's wedding. The ceremony, held on Stanley Park's Ferguson Point, joined Fraser Clarke Heston and Vancouver's Marilyn Pernfuss. Eighteen months later, the Heston clan was hard at work on a movie called Mother Lode, a made-in-B.C. adventure that Fraser wrote and produced. It starred and was directed by his father, with his wife working as the unit publicist. Leiterman was their cinematographer.
At the time of the Surfacing premiere, I was working as the New York-based entertainment trade paper Variety's Vancouver correspondent. Since the July 23 screening was the film's world premiere, I contributed the item that became that publication's opinion on the picture. Read together, the two notices show the difference between a review written for a general public concerned with entertainment values, and industry readers focused on the bottom line.
Friday, July 24, 1981

High hopes attended the announcement that Claude Jutra, one of Canada's most honored filmmakers, would bring author Margaret Atwood's 1973 novel Surfacing to the screen. Jutra's participation was first-time feature producer Beryl Fox's signal that the Atwood adaptation would be a prestige project.
Given the build-up, the dreary drama that they committed to film is particularly disappointing. Lacking either strong artistic or honest exploitation angles, Surfacing falls into that grey area where the playoff prospects are dimmest.
Troubles begin with the script. Atwood's book, one woman's interior monologue, contains no dialogue. Despite a string of actioner credits — among them 55 Days at Peking and The Lawless Breed — screenwriter Bernard Gordon was unable to derive a playable scenario from the original text.
Literary critics laud Atwood as an author of social comedies, works full of verbal wit and fantasy elements. Surfacing was the story of a mature woman struggling to rid herself of emotional dependence on a far-away father and a too-close lover.
Somewhere in there, Gordon picked up on the old wilderness-as-crucible plot and ran with it. What he comes up with is a cliched replay of 1972's Deliverance or, perhaps, its 1978 variant, the Canadian-made Rituals.
Troubles continue with the casting. Kathleen Beller, toplined in the central role, is essentially an ingenue. Last seen as the dying cheerleader in 1979's Promises In the Dark, her presence here trivializes the character by turning her into a troubled teenager.
The film opens with Beller telling live-in boyfriend Joseph Bottoms that her dad is missing in the remote north woods. He's presumed dead, but she won't believe it, and is heading off to prove it.
Bottoms offers to go along, then turns the expedition into a family picnic by inviting his sexually predatory brother, R.H. Thomson, and the brother's dominated wife, Margaret Dragu.
Dispensing with the bothersome business of character development, Jutra marches this collection of cyphers into the forest, where they face the usual dangers. A pair of beer-swilling, backwoods yahoos (Michael Ironside and Larry Schwartz) are there to leer at the women, murder a moose and terrorize the citified menfolk with their big guns.
Bottoms, of course, has to fall off a cliff to create a medical crisis. Then there is a ride in canoes down the river rapids, a rather ridiculous encounter with some still-water leeches and some overdone degradation of Dragu by Thomson.
Jutra, the director of such esteemed French-track items as Mon Oncle Antoine and Kamouraska, is disinterested here to the point of distraction. Convincing Beller to expose her heroically-proportioned bosom and Dragu to do an al fresco nude dance are his most obvious achievements.
Totally absent is any sense of just who these people are or why they're doing the things that they are doing. A sour, utterly pointless picture, Surfacing would appear to have few commercial possibilities.

The above is a restored version of a Variety review by Michael Walsh originally published in 1981. For additional information on this archived material, please visit my FAQ.

Afterword: To the best of my knowledge, author Margaret Atwood made no public comments about the adaptation of her second novel to the screen. Since Surfacing's release, four more of her works have been re-imagined as feature films. The list includes The Handmaid's Tale, a 1990 U.S. film directed by Germany's Volker Schlondorff; The Blind Assassin, a 2002 Canadian production that awaits theatrical release; The Robber Bride, a 2007 Canadian made-for-TV movie directed by David Evans; and Payback, a 2012 NFB documentary directed by Jennifer Baichwal, based on Atwood's non-fiction examination of the social meaning of debt.