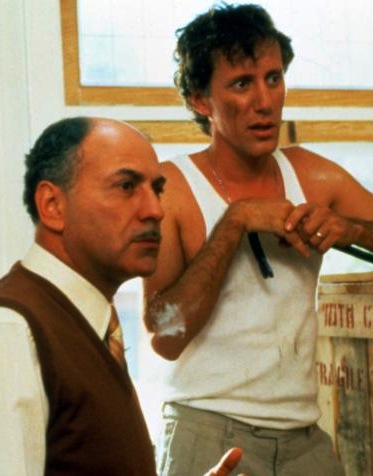 Moments from a memoir


Finding a feature within a mini-series


There are the makings of a fine Canadian film in the story of director Ted Kotcheff and novelist Mordecai Richler. Once roommates in London, their creative lives often intersected. Born on this day (April 7) in 1931, Kotcheff filmed two of Richler's novels, including the 1985 feature Joshua Then and Now.

Sunday, September 22, 1985.
JOSHUA THEN AND NOW. Written by Mordecai Richler, based on his 1980 novel. Music by Philippe Sarde. Directed by Ted Kotcheff. Running time: 116 minutes. Mature entertainment with the B.C. Classifier's warning: some very coarse language, occasional nudity and suggestive scenes. IN A STUDY FILLED WITH the mementoes of a life once "charged with certainties," Joshua Shapiro (James Woods) waits for the telephone to ring. On the wall is an old photo of the boys who attended his bar mitzvah, as well as the framed dust covers of the books he has written.
On Shapiro's desk is a portrait of his wife, Pauline Hornby Shapiro (Gabrielle Lazure; her dialogue dubbed by Susan Hogan), a Westmount "golden girl" whose whereabouts are currently unknown. Littered about are newspapers with sensational headlines implicating him in a major literary sex scandal.
A lot goes on in Mordecai Richler's 1980 novel Joshua Then and Now. Chronicling 40 years in the life of its title character, it follows his rise from Montreal's St. Urbain Street to literary prominence in both England and Canada.
Unlike The Apprenticeship of Duddy Kravitz, Richler's  first book to reach the screen, Joshua could not be contained in a two-hour feature film. To get it made at all, Montreal producers Robert Lantos and Stephen Roth developed the project as a two-part, four-hour television special for the fall of 1986.
The picture currently in release [1985] is a half-length version designed for movie theatres. The choice for filmgoers is not an easy one.
Those who wait for the telefilm are likely to see a story with more fully developed characters, stronger relationships and a better integrated plot line. On the other hand, unless the CBC intends to pioneer new standards of frankness in prime time, the theatrical version contains scenes and dialogue not intended for the home screen.
Unfortunately, the power and impact of Richler's creation will be diminished without them.
As he waits, Shapiro recalls the life that brought him to the film's opening moments. His flashback memories include conversations with his father Reuben (Alan Arkin), a former boxer with criminal connections and a colourful approach to bible studies; and with his mother Esther (Linda Sorensen), a strip-teaser who insisted on performing at her own son's bar mitzvah.
A young writer fascinated by the Spanish Civil War, Shapiro remembers 1950's London, where he fell in with International Brigade veteran Sidney Murdoch (Ken Campbell), and in love with the radically-minded Pauline Hornby Fraser. She was another man's wife and the well-born daughter of a Quebec senator (Alexander Knox).
He proposed to her during a peace demonstration, and their marriage set the stage for new class conflicts when they eventually returned to Canada.
It's good fun for as far as it goes. As directed by Ted (Duddy Kravitz) Kotcheff, the picture's episodes have verve and wit despite an utterly lifeless performance from actress Lazure. Indeed, hers is the only bad acting in a film that can boast solid supporting performances from the likes of Campbell, Alan Scarfe, Chuck Shamata, Harvey Atkin and Michael Sarrazin.
The show's highlight is Arkin's thoroughly delightful turn as Reuben, whose homilies on the Old and New Testaments are worth the price of admission.  They also made me wonder how much more good material is missing from a film that remains a fragment of a larger, possibly more coherent whole.

Afterword: Their story would make a fine Canadian movie. It begins somewhere in the south of France in the mid-1950s. At the suggestion of legendary Toronto theatre critic Nathan Cohen, young CBC television director Ted Kotcheff looks up expat Montreal novelist Mordecai Richler, and the two go out to dinner. Later, when Kotcheff relocates to London to work for Britain's independent ABC Television, he shares a flat with the writer who is working on his fourth novel, The Apprenceship of Duddy Kravitz. Reading his friend's manuscript, he promises that someday he'll make it into a movie. Flash forward to July, 1974. Having already seen his feature adaptation acclaimed as Film of the Year at the Canadian Film Awards, Kotcheff collects the Golden Bear, the top prize at the Berlin International Film Festival. Richler's screenplay earns the writer an Oscar nomination.
The story doesn't end there, though. The two were collaborators on Kotcheff's first and second theatrical features — 1962's Tiara Tahiti and Life at the Top (1965), with Richler providing the screenplays. During Kotcheff's subsequent Hollywood career, Richler worked on the script of the original Fun with Dick and Jane (1977). Following the release of Joshua Then and Now, both would be nominees for a Genie Award — the picture received 12 nominations, winning five awards — and Kotcheff was a nominee for the Palme d'Or at the 1985 Cannes Film Festival. In cinematic terms, that would be a fine place to conclude our proposed movie about two great Canadian artists.
Among the things left out is Kotcheff's launch of Sylvester Stallone's Rambo franchise, directing 1982's First Blood on British Columbia locations. Or the fact that cult film fans revere his 1971 Australian outback thriller Wake in Fright, as well as his 1989 corpse comedy Weekend at Bernie's. Maintaining his connection with Richler, Kotcheff played a cameo role in 2010's Barney's Version, the third feature film based on a Richler novel. Still active, he was in Sofia, Bulgaria, in mid-March (2016), where he announced plans to make a movie based on the life of Boris III, the Bulgarian king who sheltered his nation's Jewish citizens from the Nazis during the Second World War. Ted Kotcheff turns 85 today (April 7).