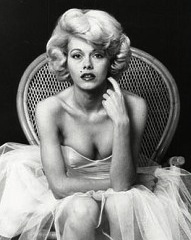 The woman who will become Marilyn Monroe (Misty Rowe) considers what she's willing to do to get what she wants, in Larry Buchanan's 1976 Goodbye, Norma Jean.


First to the screen but least with the facts


She was born Norma Jeane Mortenson on this day (June 1) in 1926. She is remembered as Marilyn Monroe, the name most likely to suggest the phrase "sex symbol" when people of a certain age play the old word association game. She is remembered as the cover girl on the December 1953 debut issue of Playboy magazine, and the vocalist whose performance of "Happy Birthday, Mr. President," sung to the 45-year-old John Fitzgerald Kennedy, is the only thing anyone remembers about his 1962 Madison Square Garden gala. Eleven weeks later, she was found dead in her Los Angeles bedroom, "a probable suicide" at 36. Eighteen months later, he was assassinated. The era that they had come to represent for so many of their fellow Americans was over. In the years since, forests have been sacrificed to provide the paper for the hundreds of books written about her place in that bygone age, and in the imaginations of many who lived through it. Novelists, biographers, photographers, historians and self-serving memoirists have all taken their shots. Inevitably, the screen star became the subject of movie biographies, the first one of which appeared in 1976, a sordid exploitation film called Goodbye, Norma Jean.

Wednesday, March 31, 1976
GOODBYE, NORMA JEAN. Co-written by Lynn Shubert. Music by Joe Beck. Co-written, produced and directed by Larry Buchanan. Restricted entertainment with the B.C. Classifier's warning: some nudity and coarse language. ON AUGUST 5, 1962, after three marriages and two miscarriages, a 36-year-old movie star named Marilyn Monroe died. Behind her were 30 feature film appearances, one very famous calendar shoot, and no children. At her funeral, Actors Studio director Lee Strasberg called her "a legend."
Because she was unmarried and childless at the time of her death, the legend became public property. No one was left to protect it or her from the flights of vultures that were soon to take wing,
That means that there is nobody with the legal right to sue the makers of Goodbye, Norma Jean, a thoroughly repulsive film that purports to tell the true story of "how she became Marilyn Monroe."
It's not.
What's more, it's also a bloody awful movie.
Were it not for the truth-claiming title card  — "This is how she happened" — this is a film that could be conveniently dismissed as a routine sexploiter that got a little out of hand. In developing his script, director Larry Buchanan carefully touches all of the usual sex-exploitation film bases.
His film introduces us to a beautiful-but-dumb teenager named Norma Jean Baker (Misty Rowe). She divides her time between climbing out of her clothes and fending off the males who want to help her in her pursuit of that particular pastime.
In the course of the film's 95 minutes she will be raped at least twice, have a lesbian encounter, enjoy a couple of near-normal heterosexual relationships, and become an accomplished fellatrix. All of the usual stuff.
Undaunted, Norma Jean is determined to turn herself into Susie Star. "Maybe I haven't much to offer, no education, no training. Maybe I'm kind of dumb, but I've got something . . . something that men want, and I'm willing to give it to them if I get what I want."
Her story begins in Hollywood, circa 1941. So do the picture's problems. Director Buchanan has no idea how to evoke period. Although he packs the screen with period props, the costumes, hairstyles and language are all wrong.
The final blow, however, is composer Joe Beck's music.
It sounds like every other cheap sex film whose producers can't afford a studio orchestra. A piano, saxophone, bass, drums — big band sound, man, what's that? — and there is enough jazzy noise on the soundtrack to cover the footage that had to be shot silent.
The only thing worse than the music is the acting. Early in the film, Norma Jean farms herself out to a model's agent. "What you'll have to go through," her agent tells her, "is like the Perils of Pauline. I don't envy you."
Try reading those lines aloud. Your delivery, first time through, won't be any worse than that of the alleged actress hired to speak them in the film.
Buchanan's skills as a film-maker are minimal. His accomplishments as a libeller, on the other hand, are monumental.
His Norma Jean is a brainless no-talent. His smarmy little movie makes the claim that she bought and paid for her breaks on her back.
He would have made a more convincing case if he hadn't changed the name of every single character except that of a dead girl who can't sue. Goodbye, Norma Jean is the work of a hack.
And a gutless hack, at that.

Afterword: Although Buchanan's softcore biopic betrays not a hint of sympathy for, or interest in, its subject beyond her exploitable name, it was the film industry's first response to the groundswell of Marilynomania occurring in the 1970s. It's been suggested that Buchanan based his screenplay on the sordid depiction of Norma Jeane Mortenson in Robert F. Slatzer's The Life and Curious Death of Marilyn Monroe (1975), a book by a man who claimed to have secretly married her in Mexico in 1952. (Slatzer's book is credited as the source for the 1991 made-for-TV movie, Marilyn and Me, in which Monroe look-alike Susan Griffiths starred.) Although Misty Rowe goes into the record books as the first actress to play Monroe, her feature was followed by a pair of 1980 telefilms: Marilyn, The Untold Story and This Year's Blonde. The former was based on Norman Mailer's 1973 biography, and featured Catherine Hicks in the title role; the latter was based on Garson Kanin's 1979 novel Moviola, and starred Constance Forslund. Canadian-born Melody Anderson (best known for playing Dale Arden in the 1980 Flash Gordon feature) starred in the imaginative 1993 telefilm Marilyn & Bobby: Her Final Affair. Another self-described former lover and confidant named Ted Jordan emerged in 1989 to publish Norma Jean: My Secret Life With Marilyn Monroe, which became the basis for the stylish made-for-cable-TV feature Norma Jean & Marilyn. The picture offered Ashley Judd interacting with Mira Sorvino in the title role(s). In 2001, there was a TV miniseries, Blonde, adapted by Joyce Carol Oates from her 2000 novel, starring Poppy Montgomery. Most recently, the Brits got into the act with Michelle Williams's portrayal of aristocratic Colin Clark's alleged paramour in 2011's My Week with Marilyn. It was based on the randy toff's memoir of working on the set of Laurence Olivier's 1956 production The Prince and the Showgirl.