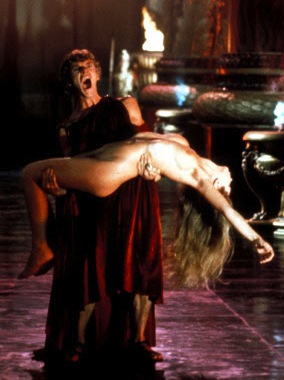 
Probably not opening at a theatre anywhere near you today (December 25) is The Interview. The FBI, famous for making video piracy their No. 1 priority since 1983, blames North Korea for the series of cyber attacks on Sony Pictures that resulted in the cancellation of an inconsequential comedy's release. Filmed in Vancouver earlier this year, it stars Seth Rogen as a tabloid TV producer recruited by the CIA to kill Kim Jong-un. The film's premise provoked threats of "11th of September 2001" actions against theatres showing it by a hacker group calling itself "Guardians of Peace." (The story is still breaking news, with Sony saying on Tuesday, Dec. 23, that it will allow limited screenings of the picture.) Even so, by stopping The Interview's wide release, the GoP managed something no protest group has been able to do in recorded memory. Its "achievement" makes it the envy of those Evangelical Christians who picketed the Vancouver opening of Norman Jewison's Jesus Christ Superstar to no avail in 1972. They returned in 1988 to protest Martin Scorsese's The Last Temptation of Christ. Their most famous failure, though, was their July, 1981, action against the sexually explicit Caligula, Penthouse Films' historical epic that went on to play for 66 weeks at Granville Street's Towne Cinema.

Friday, July 3, 1981.
CALIGULA. Written by Gore Vidal. Music by Paul Clemente (Bruno Nicolai). Directed by Tinto Brass, Bob Guccione. Running time: 148 minutes. Strictly Restricted to those over 17, with the B.C. Classifier's warning: cruel and brutal violence throughout, explicit sex scenes, depiction of childbirth. "MOTION PICTURES," FILM FOLK are fond of saying, "is a collaborative art." It's a nice phrase, one that you often hear on festive occasions such as Academy Awards night or a studio's annual stockholders meeting.
It has a fine positive ring. There are suggestions of co-operation and creative consensus, of Judy Garland and Mickey Rooney saying with one voice "let's put on a show!"
The reality, of course, is more complex. This "collaborative art" is like a coin with an angry obverse. Flip it over and you'll find the image of Caligula.
Compelling as it is controversial, Caligula is the product of creative conflict, not co-operation. A powerful subject, it engaged the energies of a number of powerful personalities whose individual visions proved incompatible. Their only common ground, it seems, was the desire to make a movie about Gaius Caesar (12-41 CE), the fourth Roman emperor, known to history as Caligula.
It began with a treatment written by the late Roberto (Rome, Open City) Rossellini, and brought to Gore Vidal by Rossellini's producer-nephew Franco. The quest for funding brought in magazine publisher Bob (Penthouse; Omni) Guccione, and the producers hired Giovanni Tinto Brass to direct their multi-million-dollar costume picture.
The key personalities were those of Vidal, Brass and Guccione. In a sense, Caligula represents the synthesis of their individual preoccupations and obsessions.
Vidal, who would eventually ask to have his name removed from the film, wrote the screenplay. An American man of letters, he is a novelist (Julian, 1964; Myra Breckinridge, 1968; Burr, 1973), playwright (Visit to a Small Planet; 1955), liberal-democratic politician and a hero of the gay rights movement.
Despite his obvious involvement with his homeland, he has lived in self-exile in Rome since the 1960s. Filmgoers saw him in Fellini's Roma (1972), and heard him say "Rome has died many times before and risen again. What better place is there to watch the death of our own civilization?"
Vidal's Caligula is a study of decline and fall, of fate and historic inevitability. An historian in his own right, he means us to see the parallels between first-century Rome and the present-day American Empire.
The Romans had evolved a system and it seemed to work. Under the Caesars, Rome ruled the world. The film opens with an image of sheep grazing in a forest.
The camera shifts slightly and we see a young couple relaxing beneath a tree. The mood is idyllic and pastoral.
The couple, clad in brief white wraps, seem to take a childlike pleasure in the sunshine, the season and one another's company. They are Caligula (Malcolm McDowell), named for the "little boots" he wore as a child, and Drusilla (Teresa Ann Savoy).
They are brother and sister.
They are also lovers, a situation that does not bode well for the heir to Caesar's throne. Their idylls will end when Caligula is called to Capri, and into the presence of his adopted grandfather, the Emperor Tiberius (Peter O'Toole).
Here we get Vidal's first lesson in the practical politics of Imperial Rome. Tiberius, at 76, is diseased and cynical. "Serve the state, Caligula, though the people in it are wretched beasts."
In contrast to the sunshine-loving Caligula, Tiberius is a troglodyte. He lives in a cave-like pleasure grotto that affords him no pleasure at all.
Walking through his subterranean gallery of "living statues" — joyless nudes acting out the emperor's unwholesome fantasies — he tells Caligula that "the Roman people are not as they were . . . I have become a swineherd."
In front of everyone, Tiberius warns his younger grandson, Gemellus (Bruno Brive), that his "brother" Caligula will probably kill him. But, of course, Caligula will be killed, too.
Though death-obsessed, Caligula does not entirely share his grandfather's jaded view of mankind. A spoiled child with some zest for life, and for a passionate sister/lover, he imagines destroying Tiberius's grim gallery.
Director Brass came into the project fresh from a picture called Madame Kitty (aka Salon Kitty; 1976), the story of a brothel run by the Nazi SS so that they can spy on Germany's own officers. Full of Latin intensity and a Felliniesque love of the grotesque, Brass offers the sexual transaction as the ultimate political metaphor.
Then there is Guccione. The photography that he does for his own magazine — soft-focus nudes in highly romantic settings — suggests that he was more interested in the appealingly sensual aspects of the story. Sex was, after all, part of the lifestyle in the pre-Christian Roman court.
A distinguished cast, including Shakespearians Sir John Gielgud (as a disapproving senator) and Helen Mirren (as Caligula's wife Caesonia), give the film its fully human dimensions. Art director Danilo Donati, a three-time Oscar-winner for his work with Franco Zeffirelli and Federico Fellini, is responsible for the picture's sumptuous look.
The big surprise is how unshocking this well-publicized shocker of a film is on screen.
Brass effectively takes us into Caligula's world, and the horrors that are part of it. Vidal's crisp script, the pacing, and the performances do the rest.
In a sense, the story of Caligula, his descent into madness and its consequences for the Romans, is not unlike the history of Hitler's holocaust. Afterwards, in moments of historic calm, people ask themselves "how could such things happen?"
Such things, unfortunately, have happened, down through the ages.
Caligula had total power over his subjects: over their success and failure, their pleasure and pain, their lives and deaths. Unless we understand the seductive attractions of what many of his subjects enjoyed, we cannot understand the horrors that they chose to ignore.
Though the film's collaborators were in constant conflict over matters of emphasis, they were agreed that Caligula's story was worth telling. Despite their differences, they produced a picture that's worth seeing.

Afterword: There is an actual, if tenuous, historical connection between the historic Caligula and Christmas. In the ancient world, astronomical phenomena were considered portents, the most famous example being the Star of Bethlehem that led the Magi to the birthplace of the Christ child. The Gospel writer was, of course, viewing the heavens from the Roman province of Judea, and applying the popular belief to his Christian narrative. The same cosmos viewed from Rome was subject to other interpretations. Among the stories told of "Little Boots" was that his birth was marked by the appearance of a star and, given the slipperiness of the historical record with regard to dates, it might well have been the same star referred to in Matthew. My own interest in Caligulan trivia was stimulated by a subpoena I received in late 1981 to testify in the Edmonton trial that followed upon the seizure by local police of the allegedly "obscene" film from the theatre where it had opened. Because I had reviewed the film positively (and at length) in Vancouver, the defence team sought me out as an "expert witness on contemporary community standards" (a role I had played on two previous occasions in Vancouver courtrooms). Together with Simon Fraser University criminologist Ehor Boyanowsky and B.C. Director of Film Classification Mary-Lou McCausland, I was one of a trio of Vancouverites that the defence flew into Alberta to fight the charge of obscenity brought against Edmonton's Towne Cinema Theatres. On December 4, 1981, Justice Clarence Yanosik found for the defence, dismissing all charges.