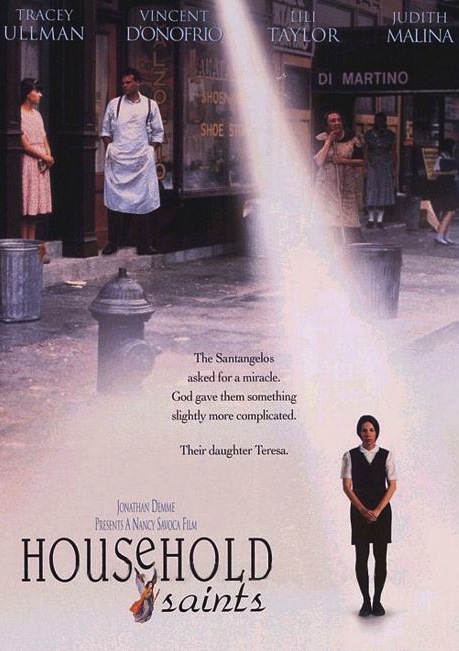 "The Santangelos asked for a miracle. God gave them something slightly more complicated. Their daughter Teresa" are the words on the 1993 poster for director Nancy Savoca's Household Saints.


Today (July 23), Swedish Catholics observe the feast of Brigitta, their nation's patron saint. In pursuit of more information, I visited the Catholic Online website. In addition to a detailed biography, its Brigitta page includes a single-panel Saints Fun Facts comic (written & illustrated by John Sheppard) that tells us everything we need to know. "From Sweden, Brigitta was a mystic and Saint, founder of the Bridgettine nuns. The order spread throughout Europe with monasteries from Scandinavia to Italy. Brigitta was also a wife and mother of eight children. Patron Saint of Sweden. God appeared and spoke to Brigitta numerous times." The main biography fills in the details, including the facts that she lived from 1303 to 1373, that she was kinswoman to Sweden's King Magnus Eriksson and Lady-in-Waiting to his queen, and that she was canonized in 1391. Because none of her many holy endeavours were accomplished in her lifetime, she is often called the "Patroness of Failures." Brigitta would be a suitable subject for any one of the many talented women in the American movie business who produce fine films and yet fail to receive the recognition and support they deserve. It's possible that independent writer-director Nancy Savoca, born on this day in 1959, had Brigitta's story in mind when she made her luminescent 1993 feature Household Saints.

WE HAVE OFTEN WALKED down these streets before . . .
New York's Little Italy, the setting of Nancy (True Love) Savoca's luminescent Household Saints, is a source of endless inspiration for film-makers with names like Coppola, De Palma, Ferrara and Scorsese. Individually, the male directors have staked out the mean streets, identifying Italian-American wise guys as their own area of expertise.
Savoca is more interested in the women. Indeed, she demonstrates that it's possible to make a completely truthful film about Italian-Americans without mayhem, a mobster or a major crime anywhere in sight.
A matter-of-fact tale of faith, family and mid-century Catholicism, her film asks us to believe in miracles. It opens at a family gathering in a suburban backyard where an elderly couple (Irma St. Paul, Leonardo Cimino) are recalling the story of "St. Teresa of Mulberry Street."
Straight away, Savoca turns her tale into folklore. It is a story told in flashback. The three wonderful women at its centre are ethnic archetypes.
Widowed Carmela Santangelo (Judith Malina) has a peasant faith heavy on signs, omens, and outright superstition. She believes that their unambitious, 17-year-old neighbour Catherine Falconetti (Tracey Ullman) is "unlucky."
American-born, Catherine is practical, keenly observant but fatalistic. When her widowed father Lino (Victor Argo) "loses" her in a pinochle game, she marries the winner, Carmela's outgoing bachelor son Joseph (Vincent D'Onofrio).
Stories improve in the telling. Savoca begins hers with that famous 1949 pinochle game and shows us Joseph holding a winning hand of hearts.
"Man deals. God stacks the deck," Joseph says later.
Is it a miracle that Catherine's father should offer Joseph the very thing he wants, before he even knows he wants it?
In time, the thoroughly modern Catherine and Joseph have a daughter. Unlike her parents,  Teresa (Rachael Bella) takes her religion very seriously.
A pre-Vatican II schoolgirl, she suffers a personal crisis in 1960 when the pope fails to reveal the final secret of Fatima. Later, as a teenager (Lili Taylor), she takes as her role model St. Therese of Lisieux, "the Little Flower."
Though Joseph refuses to allow his daughter to become a nun — a Carmelite, no less — in her own mind Teresa has already become a Bride of Christ. Just as her grandmother Carmela enjoyed visits from the shade of her late husband, Teresa is blessed with a vision of Jesus (Sebastian Roche).
As in Abel Ferrara's Bad Lieutenant (1992), Christ appears wearing a crown of thorns and displaying His stigmata. For Teresa, though, he has blue eyes, a cultivated English accent and a great smile.
Not your standard Hollywood domestic fantasy, Household Saints speaks directly to the experience of Catholic girls and women of a certain age. Drawing upon mystic Mediterranean religious traditions, it suggests that in accepting fate, they shape it.

Afterword: Part of the independent New York film community, Nancy Savoca made her directorial debut with 1989's True Love, a romantic comedy that she co-wrote with her husband Richard Guay. Married in 1980, the couple have been lifelong collaborators, with Guay writing four and producing all of Savoca's six theatrical features. They specialize in examinations of the female experience, and her second feature, 1991's Dogfight, starred Lili Taylor. (The story of a young woman's humiliation during a date with a marine, it was adapted as a stage musical and enjoyed a successful Off-Broadway run in 2012.) Following Household Saints, Savoca collaborated with Cher on a 1996 TV mini-series examining the abortion issue, If These Walls Could Talk. In 1999, she did a second comedy, The 24 Hour Woman, then returned to more dramatic fare with 2003's Dirt, about an illegal immigrant in domestic service, and Union Square (2011), about sisters reunited during a critical moment in both their lives. Last year, she paid a visit to Vancouver to shoot If There Be Thorns.  An adaptation of the third book in Virginia Andrews's creepy Dollanganger series — a five-book family saga that began with Flowers in the Attic — it was broadcast in April on the U.S. Lifetime cable network. Nancy Savoca celebrates her 56th birthday today (July 23).
For more on Saint Brigitta, and to view the Saints Fun Facts comic panel, click on the Catholic Online website's Birgitta page.