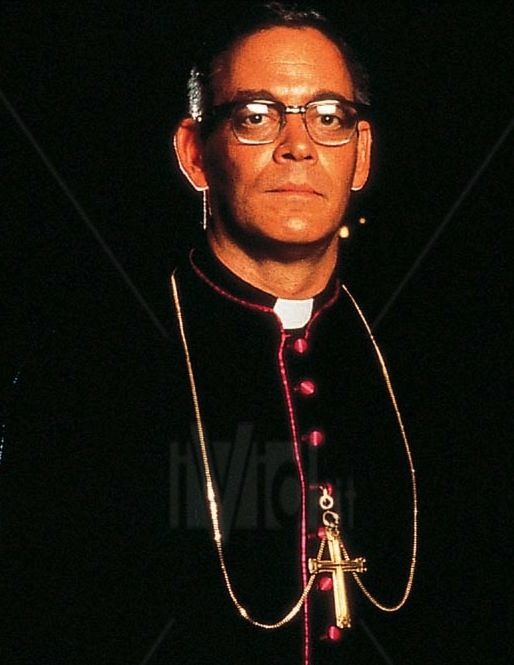 Raul Julia plays the title role in 1989's Romero, the true story of a prelate who makes the journey from privileged priest to social reformer.

murder in the chapel


Preaching the gospel of social justice


Papalmania. What else can you call it when the Bishop of Rome makes the cover of Rolling Stone (Feb. 13)? After being named Person of the Year by Time (Dec. 23), and Best Dressed Man of 2013 by Esquire (Dec. 27), Pope Francis has received his celebrity imprimatur from the publication whose target demographic skews more towards Madonna than The Madonna. Just one year after his election by the papal conclave (March 13, 2013), the former Cardinal Archbishop Jorge Mario Bergoglio has made Catholicism cool. The first non-European pope in more than 1,200 years, the Argentine-born Jesuit is more than a genial gent with a keen fashion sense. For many, he is the best hope for renewal in the Church since the reform-minded John XXIII convened the Second Vatican Council in 1962. Some have suggested that his Latin American roots and Jesuitical style will result in a "reconciliation" with Liberation Theology, the socio-political movement condemned in the 1980s by the Vatican's Cardinal Ratzinger (who preceded Francis as Pope Benedict XVI). Some have even compared Francis's journey to that of martyred Salvadoran Archbishop Oscar Romero, who was assassinated on this day (March 24) in 1980. His story is told in director John Duigan's powerful biopic Romero (1989).

Thursday, November 26, 1989.
ROMERO. Written by John Sacret Young. Music by Gabriei Yared. Directed by John Duigan. Running time: 102 minutes. Mature entertainment with the B.C. Classifier's warning: some gory violence and occasional nudity. OLIVER STONE COMPARES him to Becket.
In Stone's 1986 feature Salvador, Major Max (a character based on the notorious Salvadoran National Guardsman and death squad leader Roberto D'Aubuisson) says "Who will be the one among you to rid me of this Romero?"
Stone's own feelings about Oscar Arnulfo Romero y Galdames, the Roman Catholic archbishop of San Salvador, are unambiguous.
''He's a great man," says American journalist Richard Boyle (James Woods), the movie's central character. "A man of God. They say he's going to win the Nobel Peace Prize."
"He's the only man who can save El Salvador . . . " adds Boyle's Salvadoran paramour.
At the midpoint of Stone's film, there's a murder in the cathedral. Moments after taking communion from the archbishop, Boyle sees him gunned down at point blank range by one of Major Max's fanatical followers.
Outraged at U.S. complicity in such Central American atrocities, Academy Award-winning director Stone produced an angry, politically-charged picture. For the purpose of dramatic impact, he credited Romero's killer with far too much courage.
In fact, the archbishop was shot in a small, considerably less public hospital chapel, as he said mass for the resident nuns. His assassin lurked in the shadows of an exit, as concerned with escape as with silencing a voice that called for social justice.
A rather more faithful version of his death is offered in Australian director John Duigan's Romero. A drama developed and financed by committed American Catholic churchmen, it's a thoughtful, compelling portrait of an unlikely martyr.
Consecrated archbishop in 1977, bookish, unassuming Monsignor Oscar Romero (Raul Julia) is regarded as a "safe" conservative. Political activism seems the farthest thing from his mind.
Once installed, though, El Salvador's spiritual leader cannot ignore the suffering of his flock.
The brutal murder of his friend and conscience, reform-minded Father Rutilio Grande (Richard Jordan), demonstrates to him the deep division between an impoverished people and the ruling oligarchy that will countenance any horror to maintain its hold on power.
Uninvolved and above it all is the Church. Or is it?
"Jesus is not up there somewhere in a hammock," the plain-spoken Father Grande once told Romero. "Jesus is down here with us!"
"The Church is a whore," industrialist Francisco Galedo (Harold Gould) warns him. "(She) will spread her legs to the highest bidder."
Unlike Oliver Stone, Romero screenwriter John Sacret Young is less interested in exposing official U.S. hypocrisy than in illuminating a crisis in contemporary Catholicism. Sensitive to his people's plight, Romero embraced the activist tenets of Liberation Theology, a doctrine born at the 1968 conference of Latin American bishops held in, of all places, Medellin, Columbia.
Condemned by Pope John Paul II for its left-leaning politics, Liberation Theology insists that God's Church involve itself with the poor and dispossessed in their struggle for freedom from political oppression and economic want. From the beginning, Jesuits have led the way, fighting (and dying) for this new, engaged vision of the Church Militant.
By preaching his faith and serving the "God of the poor," Romero earned the deadly enmity of the powerful few. As played by the restrained, intense Julia, he emerges as a sensitive, decent soul forced to take up the cause of social justice because of the excesses of a government that maintains "order" by means of political terrorism.
In an irony of casting, Tony Plana, the actor who played the death-dealing Major Max in Stone's picture, is seen here as Jesuit Manuel Morantes, a radical priest who is driven to take up the gun against the murderous rightists.
A tragic, moving tale that is once again in the headlines, Romero is solid, gripping advocacy entertainment.

Afterword: The headlines referred to in the above review's final paragraph reported on the November 16, 1989, murder of six Jesuit priests at a university in the Salvadoran capital, San Salvador. The outrage was committed by a military death squad, one of many atrocities during the country's 12-year-long civil war. The feature film Romero was the first theatrical release from Paulist Pictures. The company was founded in 1960 by the New York-based Missionary Society of St. Paul the Apostle, otherwise known as the Paulist Fathers, to produce religiously themed television projects. Telling Romero's story on the big screen was seen as part of the Society's ecumenical mission of using modern media to forge links between popular culture and Catholic teaching. Framing it as a political thriller won the picture commercial theatrical bookings. (It ranked 158th among 1989's 240 feature releases.) First portrayed in Oliver Stone's Salvador (1986), Oscar Romero has also been depicted in two made-for-TV movies on the life of Pope John Paul II. The process of canonization — declaring Romero to be a saint — that was begun in 1990 ground to a halt in 2005, following the election of  his old ecclesiastical adversary, Cardinal Joseph Ratzinger, as Pope Benedict XVI. It resumed last year with the approval of the new Pope Francis. A week ago Sunday (March 16), Canada's Catholic Register newspaper ran this illuminating feature headlined To understand Pope Francis, look to the Jesuits.

2015 Update: This morning (May 23), an estimated 250,000 people gathered in the streets of San Salvador to celebrate the beatification of Oscar Romero. On February 3, 2015, Pope Francis signed a decree recognizing Romero as a Roman Catholic martyr. Today's ceremony, at the cathedral in El Salvador's capital city, is the last step before he is declared a saint.

2018 Update: Pope Francis celebrated a mass today (October 14) in Rome during which Oscar Arnulfo Romero was canonized a saint of the Roman Catholic Church. "Jesus is radical,” the pope said in his homily. “He gives all and he asks all: he gives a love that is total and asks for an undivided heart.”