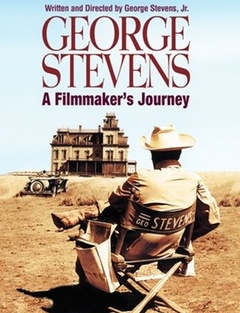 A photo of the director on the set of Giant is featured on a poster for the 1984 documentary feature George Stevens: A Filmmaker’s Journey.

My father the filmmaker


Less analysis than an act of filial piety


As comfortable directing a screwball comedy as a biblical epic, George Stevens was born on this day (December 18) in 1904. His 40-plus years behind the camera were celebrated by his son in the 1984 documentary feature George Stevens: A Filmmaker’s Journey

Thursday, November 7, 1985
GEORGE STEVENS: A FILMMAKER’S JOURNEY. Documentary examination of the life and work of a Hollywood director. Music by Carl Davis. Written and directed by George Stevens, Jr. Running time: 110 minutes. General entertainment. WAS IT THE WAR that changed him? Before he answered his country's call, George Stevens had a reputation as a director of feature comedies.
In the old studio tradition, he had worked his way up, first as a cameraman, then as a writer and finally director for Hal Roach's biggest stars, Stan Laurel and Oliver Hardy. After making the transition to feature direction, he made his major pre-war impact with such sprightly fare as Swing Time (1936), Gunga Din (1939), Woman of the Year (1942) and The More the Merrier (1943).
“I hated to see George go to the more serious pictures,” recalls Katharine Hepburn, who starred opposite Spencer Tracy in Stevens's Woman of the Year. “What he could do with comedy was unique.”
Stevens was one of a number of name Hollywood directors who volunteered for military duty following Pearl Harbor. Lt.-Col. Stevens, 38, served in the European Theatre. His assignments included filmming the D-Day landings and the liberations of Paris and Dachau.
He turned serious after that. In 1945, together with William Wyler, Frank Capra and Samuel Briskin, he set up a company called Liberty Films to produce slick ''message pictures." (It made only one feature, Capra's 1946 fantasy classic It's a Wonderful Life.)
With one exception, Stevens's post-war projects were all dramas — among them A Place in the Sun (1951), Shane (1953), Giant (1956), The Diary of Anne Frank (1959) and The Greatest Story Ever Told (1965).
What changed?
Don't look for the answer in George Stevens: A Filmmaker's Journey, George Stevens Jr.'s respectful, resolutely shallow examination of the life and work of his famous father. This is the sort of upbeat tribute in which seldom is heard a discouraging word.
Stevens fils avoids both analysis and any mention of Stevens père's more disappointing projects — among them the abandoned Liberty Films and his profligate final feature, a spectacularly unsuccessful return to comedy called The Only Game in Town (1968).
What he offers is a paean to his perfect papa, a collection of nostalgic film clips and laudatory interviews. Giving added interest to the piece are the director's own “home movies,” 16mm colour footage offering behind-the-scenes glimpses of feature productions and Stevens Sr.'s own war in Europe.
Marring our enjoyment of these tidbits is the fact that Stevens Jr.’s documentary seems designed for the square (television) screen. Conventional theatre projection lops off the image top and bottom to provide the expected wide-screen picture.
As a result, A Filmmaker's Journey will be as frustrating as it is fascinating to the film buffs who are the picture's intended audience.

Afterword: Hollywood — the corporate entity that makes money from the manufacture of screen entertainment — excels at self promotion. Even so, I’d hoped for something more than a slick tribute film from George Stevens Jr. Yes, he’d been born a prince of the realm, the son of an honoured director and his silent-screen actress wife. George Jr. had been raised in the royal court, serving as a production assistant to his dad on the sets of the Oscar-winning features A Place in the Sun and Giant. From 1961 to 1966, he served his country (and honed his documentary skills) as director of the United States Information Agency Motion Picture Service, the federal department tasked with producing Washington’s Cold War propaganda.
Despite all that, I was hopeful because, in 1967, he was the founding director of the American Film Institute, a non-profit organization dedicated to cinema preservation and education. I regularly picked up American Film, the magazine that it began publishing in 1975, because its articles offered serious analysis and commentary on the movies. As a result, I expected more from A Filmmaker's Journey than Stevens Jr. was willing to deliver.