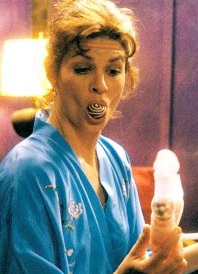 In director Anne Wheeler's 1999 feature comedy, 40-something Lila (Wendy Crewson) discovers that there is something Better Than Chocolate.


Soft centres, hard centres . . . I like all the chocolates in the box


On this day (May 9) in 1970, a group called the Radicalesbians held an all women's dance in New York City. Eight days earlier, the organization, formed by gay women frustrated by the predominantly male events of the Gay Liberation Front, had published The Woman-Identified Woman manifesto, today considered one of the founding documents of lesbian feminism. Thirteen years later, on May 3, the Little Sister's bookstore opened in Vancouver's West End. In May, 1985, Canada Customs agents seized a shipment of the shop's lesbian magazines, setting off a 15-year-long legal battle that resulted in a landmark decision by the federal Supreme Court, one that found in favour of the bookstore. In 1999, a year before the Court's ruling, director Anne Wheeler incorporated elements of the Little Sister's story into her feature film Better Than Chocolate, "a delicious comedy" that told the story of lesbian lovers navigating the social complexities of the mid-1990s. Among the problems they face is the arrival in town of the mother of one of the pair. The part was played to comic perfection by actress Wendy Crewson, who was born on this day (May 9) in 1956. This year,

BETTER THAN CHOCOLATE. Written and co-produced by Peggy Thompson. Music by Graeme Coleman. Running time: 101 minutes. Directed by Anne Wheeler. Rated 18A in British Columbia. LILA (WENDY CREWSON) IS OBLIVIOUS to the obvious. Maggie (Karyn Dwyer), her 19-year-old daughter, is in love.
Granted, 40-something Lila is currently navigating her own personal Slough of Despond. Her husband, a successful corporate lawyer, has left her for a younger woman, someone she calls "Sandra, the tequila slushy queen." Doubting that she'll ever love or be loved again, she ruefully announces that "chocolate's the only pleasure left for me."
Single again, Lila has temporarily moved in with Maggie and her loft-mate Kim (Christina Cox). One evening, while the young women are off clubbing, a tipsy Lila finds a box of sex toys under their bed.
Confused at first, she examines them. Then, in an adventurous, gloriously operatic moment, Lila discovers something Better Than Chocolate.
A same-sex cinema classic, director Anne Wheeler's 1999 feature was recently screened at Vancouver's Pacific Cinémathèque, part of a series celebrating films made in British Columbia. Seeing it again, I was struck by two things.
One was that the film hardly needed a new review. At the time of its release, Better Than Chocolate received favourable notices in the New York Times ("a comic rhapsody to romantic love"), the Washington Post ("breezy, sometimes downright raunchy"), the San Francisco Chronicle ("smart, funny adult entertainment") and the trade paper Variety ("terrifically entertaining . . . guaranteed to please").
The other thing was that, 17 years later, there were new pleasures to be found in a "delicious comedy" that was so much of its time and yet so immediate as to be timeless. As written by Peggy Thompson, it is a Celtic knot of three love stories that invites us to consider the complexities of intimate relations on the eve of the 21st century.
At its centre is Maggie, who has dropped out of college to "learn about life from life," and her lover Kim, the itinerant artist who has ignited the fire within her. Maggie works in a specialty shop called Ten Percent Books, run by a tightly-wound Gertrude Stein fan named Frances (Ann-Marie MacDonald).
Complicating Frances's life is the fact that she is being wooed by club singer Judy Squires (Peter Outerbridge), a young man one operation away from completing his transition to being a woman. Finally, there is Carla (Marya Delver), Maggie's bi-sexual co-worker at the book store, who takes on the task of introducing Maggie's 17-year-old brother Paul (Kevin Mundy) to the joys of adulthood.
In the process, Carla delivers the sex-positive message at the film's heart: "Soft centres, hard centres . . . I like all the chocolates in the box."
Wheeler, the director of such female-focused dramas as 1987's Loyalties and Bye Bye Blues (1989), has a keen eye for X-chromosome casting. Karyn Dwyer manages just the right balance of vulnerability and passion as wannabe rebel Maggie. As her love object Kim, Christina Cox reciprocates with a dangerous charm that nicely maintains the heat between them.
Carrying off the larger-than-life role of Judy, Peter Outerbridge manages to bring a wisdom and strength to a character with an inner rage in conflict with her real zest for the life he wants. Finally, as the betrayed woman trying to make sense of it all, Wendy Crewson holds it together with a comic performance that hits all the right soap operatic notes.
Between them, Thompson and Wheeler have created a work of art that delights in the fine arts. Its two major locations are the bookshop (where a poster for the 1992 documentary feature Forbidden Love establishes the time as the mid-1990s) and The Cat's Club, a gay cabaret where Maggie and Judy are among the musical performers.
Creativity is also key to scenes in Maggie's sublet loft, where she and Kim make love and art simultaneously. We see it as well in Judy's condo, the focus of anger-managing interior decoration and a personal make-over for her and Lila.
Which brings us back to Lila, and a layer of distinctively Vancouver delights that provides Better Than Chocolate with an extra layer of regional (and national) importance. in the heartfelt conversations between the film's two transitional characters, Judy and Lila, Thompson hints at the cultural changes going on in a city learning to deal with diversity.
The theme is more explicit in the subplot involving the harassment of the Ten Percent Bookshop by censorious government agencies. In it, locals will recognize  the true story of the Little Sister's Book and Art Emporium, an embattled history that included lengthy court battles and at least two mid-1980's firebombings.
That said, director Wheeler never loses sight of the filmmaker's responsibility to entertain. Remembered as outrageous in 1999, Better Than Chocolate derives its staying power from the fact that it's built on a solid cinematic foundation of appealing characters, dynamic performances and sophisticated story-telling technique.
All of these qualities are on display in a 15-minute mid-feature summation, in which the film's major emotional plot-lines intersect in a series of intercut scenes. Wheeler jumps from Judy singing at The Cat's Club (revealing her "tender transgender heart" to Frances), Carla on the waterfront with Paul, and Lila alone at home enjoying herself to the strains of La Traviata. The result is a breathless blend of poignance, joyful fulfillment and ribald comedy.
Part social commentary, part urban history, Better Than Chocolate is, as Variety reviewer David Stratton said, "terrifically entertaining." Available on DVD, it's well worth seeking out.

The above is an original Reeling Back review by Michael Walsh. For additional information on this archived material, please visit my FAQ.

Afterword: Hamilton, Ontario-born Wendy Crewson honed her mothering skills playing the parent of Macaulay Culkin's subteen bad seed character in 1993's The Good Son. Seasonal filmgoers also know her as Laura, ex-wife of Tim Allen's North Pole conscript character in the Santa Clause series (1994; 2002; 2006). Versatile and hard-working in television and feature films, she was married for 21 years to actor Michael Murphy. Divorced in 2009, Crewson publicly came out as gay in December, 2014. Today (May 9) is her 60th birthday.
Seven months after Better Than Chocolate's theatrical release, the Little Sister's case reached the Supreme Court of Canada. The Court's landmark ruling, delivered on December 15, 2000, found in favour of the bookstore. No surprise, then, that Little Sister's is something of a legend in the fight for gay rights in Canada. In 1995, the shop's manager, Janine Fuller, co-authored Restricted Entry: Censorship on Trial, a non-fiction book about the then ongoing battle, and wrote the introduction to Forbidden Passages: Writings Banned in Canada, an anthology of literary excerpts. In 2002, comic arts journalist Robin Fisher edited two collections of "graphic interpretations against censorship," both sold to benefit the Little Sister's defence fund. One, titled What Right?, featured non-explicit illustrated commentaries; the other, What's Wrong?, challenged authorities with X-rated content. Also in 2002, Better Than Chocolate music composer Graeme Coleman contributed a score to director Aerlyn Weissman's documentary feature Little Sister's vs. Big Brother. In a way, this brings the story full circle, as Weissman had co-directed the Genie Award-winning NFB feature Forbidden Love: The Unashamed Stories of  Lesbian Lives. That movie's poster is visible on the wall of Ten Percent Books in Better Than Chocolate.