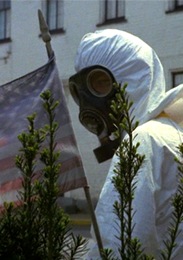 A hazmat-suited soldier is one among the many sent to destroy Evans City in order to save it from The Crazies (1973).


When trust is not an option


In a 2006 article published in the Globe and Mail, Christopher Frey recalled a character in 1968's Night of the Living Dead saying: "I'm heading north, to Canada . . . where there's no people." It reminded me of the deep-seated romanticism for the Idea of Canada in American popular culture, a notion that I first noticed in a 1971 made-for-TV movie called The Last Child. A near-future sci-fi feature, the plot involved a couple fleeing from a totalitarian U.S., where second pregnancies are forbidden. At the time, Canada was known as a safe haven for American Vietnam war resisters, and the movies were reflecting the belief — more of a hope, really — among the liberally-minded that freedom, tolerance and sanity remained alive and well in the Great White North. Such beliefs were rooted in the 19th century, and the fact that Britain's Canadian colonies were terminal points for the Underground Railroad, the network that Southern American slaves used to flee to freedom. The line that Frey quoted was written by director George A. Romero, who was born on this day (February 4) in 1940. Acknowledged as the father of the modern zombie film, Romero moved to Toronto in 2004, took out Canadian citizenship in 2009 and married Suzanne Desrocher, his Canadian girlfriend, in 2011. Among his early films accorded cult status is The Crazies (1973).

Thursday, November 10, 1977
THE CRAZIES. Co-written by Paul McCollough. Music by Bruce Roberts. Co-written, directed and edited by George A. Romero. Running time: 103 minutes. Restricted entertainment with the B.C. Classifier's warning: very violent throughout. GEORGE ROMERO USED TO BE in advertising. Before he turned his hand to features (to produce the 1968 horror classic, Night of the Living Dead), the Philadelphia director made TV commercials.
After years of "moving the merch," Romero was something  of an expert on the subject of trust. And something of a skeptic.
Taken to nightmare lengths, his skepticism blossomed into the plotline of The Crazies.
Who do you trust? The mayor of Evans City trusted the army's Major Ryder (Harry Spillman).
Told that the plane that crashed in the hills above his rural Pennsylvania town contained  materials that might contaminate the community's water supply, he agrees to ''co-operate with the authorities."
Major Ryder trusted his superiors. Told that TRIXIE, the toxic  substance endangering Evans City, is an experimental vaccine, he moves in with his troops to quarantine the area and set up a  decontamination centre.
Two local children trust their father (Regis Survinski). As the film opens, they are the first to learn the terrible truth about TRIXIE.
Not a vaccine, but a germ-warfare weapon, it has the effect of driving its victims insane. The horrified children can only watch as  their infected father, having murdered their mother, sets fire to their home.
In The Crazies, there is no one left to trust. Even as Major Ryder is turning over his command to a tough combat colonel, Chris Peckem (Lloyd Hollar), Washington is constructing scenarios for a cover-up.
If the troops fail in their containment mission, a pre-arranged nuclear "accident" will cauterize the countryside.
On the ground, a small war has broken out. Government biologist Alex Watts (Richard France) is appalled by what he sees.
"It just amazes me how shoddy this operation is."
"Nothing amazes me in this goddamn army any more," snaps back the frazzled colonel. "Nothing."
Romero, though working on a shoestring budget, has put together one hell of a thriller. Fast paced and logically structured, it has a chilling credibility that carries us into its own vortex of terror.
Romero invites us to share the experience with three Evans City citizens: volunteer firemen Clank (Harold Wayne Jones) and David (Will McMillan), and David's pregnant girlfriend, Judy (Lane Carroll).
Their desperate efforts to avoid the protectively-garbed soldiers and their own diseased neighbours offer an  effective counterpoint to the rattling of the official machinery.
The reactions of these characters, combined with a mass of carefully observed, often cynically ironic details, make The Crazies a high voltage shocker. Raw and vital, it is a nightmare to remember.

Afterword: While George Romero didn't invent the zombie movie — that distinction goes to Victor Halperin, director of 1932's White Zombie — he certainly shaped its modern form. His  independently-financed Night of the Living Dead (1968), co-written by John Russo, struck a chord with boom-generation filmgoers. They probably identified with its helpless heroes, under attack from a shambling, homicidal horde of newly revived corpses. A surprise hit, it called out for sequels. When the two writers failed to agree on how to continue their story, they parted company. Russo retained the right to make movies with the phase Living Dead in the title and, together with screenwriter Dan O'Bannon, went on to make The Return of the Living Dead (1985). Between them, Russo and O'Bannon made another six titles in the series. Romero kept the simpler title word Dead, adding a 1990 remake and two further sequels to his series. Romero's vision has, of course, been embraced by many others. In the process they've made zombie cinema the single largest horror genre of the 21st century, pulling ahead of vampire movies, the previous audience favourite. The one element of the new lore that Romero cannot take credit for is the modern zombie's insatiable craving for brains. That, apparently, was cooked up by writer-director Dan O'Bannon for 1985's The Return of the Living Dead, and turned into a catchphrase for a new generation of filmgoers by The Simpsons in a 1992 Treehouse of Horror episode, Dial Z for Zombies.