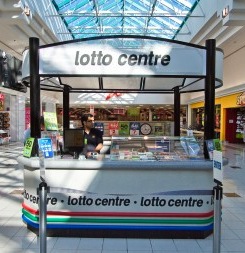 One-stop gambling is just another amenity available today at Central City in Surrey, B.C., despite the real social consequences director Tom Shandel warned of in his 1980 documentary Lotomania.


Gambling, the addictive behaviour that its corporate promoters call "gaming," continues to be a source of controversy in B.C. More than 30 years ago, director Tom Shandel documented the case against government encouragement of Lotomania (1980).

Thursday, October 16, 1980.
LOTOMANIA. A National Film Board of Canada documentary. Written, produced and directed by Tom Shandel. Running time: 26 minutes. WHEN YOU BUY A lottery ticket, the odds are against you. According to the statisticians, you stand a better chance of being struck by lightning twice than winning a million dollars once.
When Tom Shandel set out to make Lotomania, a movie about Canada's lotteries, the odds were against him. A social activist with a strong anti-lottery bias, he soon discovered that "people didn't realize that lotteries had negative aspects."
Canadian lotteries, the Vancouver film-maker says, are "a regressive form of taxation," an entertainment phenomenon that is unique in that it is most supported by the people least able to afford it. "There's no question that people want lotteries," he says, "and those victimized by them — the poor and the elderly on fixed incomes — are the most vociferous in their defence."
When it comes to the subject of lotteries, Shandel says, "there's no natural advocate on behalf of the consumer. Newspapers and television see lotteries as a reliable and regular advertiser. Our governments run them. They are a phenomenon from which a lot of people derive a significant pleasure."
Most of us shrug off lotteries as essentially harmless, an innocent gamble that represents a chance, albeit a long one, for instant riches. Not so, says Shandel. Canada's lotteries are anything but harmless.
In the first place, they are a negative economic force. In the second, they offer the potential for widespread political abuse. In the third, they represent exploitation of the disadvantaged by an advantaged class.
"Think about it," he says. "Lottery monies support the recreational and leisure activities of the middle class." Citing examples from a British Columba Lotteries report (available to the public from the offices of B.C.. Lotteries in Victoria), Shandel says that the major beneficiaries of the lottery's largesse are sports and community cultural groups.
"It's ironic that lotteries are being used to pay for cultural services." As such "they represent an unintentional conspiracy of the middle classes over the poorer ones. Like predators, they're working over those lower on the economic ladder."
The potential for political abuse exists because, although Canadian lotteries are government run, only one province considers lottery funds to be public property, "In Quebec, lottery money goes into general revenues, which means that it is treated as government funds and is subject to the usual checks and balances. It is included in ministerial estimates that are publicly debated in the National Assembly."
In B.C., on the other hand, "lottery funds are dispensed by ministerial discretion. It's done on the Provincial Secretary's signature," he says. As a result, "we're treated to the sight of Premier [Bill] Bennett travelling through the province distributing cheques for a footbridge here, and a bus for the local softball team there."
Although Shandel was a New Democratic Party candidate during the 1979 provincial election (he and his running mate, Hilda Thomas, were defeated in the double riding of Vancouver Point Grey by recycled Liberals Pat McGeer and Garde Gardom), he points out that the B.C. Lottery was set up "in 1974  by the NDP, and gleefully carried on by the Socreds [Social Credit party]."
"I can't think of one politician in either the opposition or the government who has spoken out against this practice," he says. "Why should they? It's free money, and absolutely irresistible."
Finally, he says, lottery monies are a significant force in the economy. "Lotteries fleece the public out of its spare change, taking purchasing power away from the people and giving it to government. It's ironic that lottery monies pay for cultural services since they are in direct competition with those services for the public's entertainment dollar."
Backed by the National Film Board's B.C. regional production chief John Taylor, Shandel wrote and directed Lotomania, a 26-minute examination of Canada's lotteries. The finished product was passed along to the NFB's distribution people who greeted it with a large lack of enthusiasm.
Understandably, says Shandel. "The NFB is hoping for a share of the lottery funds. Also, its distribution people serve the film needs of school boards, who often get lottery funds to buy film." All of which "contributed to the general lack of enthusiasm."
One morning, Shandel read in The Province [newspaper] that the United Church of Canada had taken a strong anti-lotteries stand. He called church officials in Toronto and suggested that they take a look at his film.
They did, and they liked it. The churchmen, representing a network of some 6,000 film users in Canada, felt the film could be used to stimulate thought and discussion on the subject and were eager to involve themselves in its distribution.
Tuesday evening [October 14, 1980], Tom Shandel's Lotomania was officially launched at Toronto's St. Lawrence Centre under the joint auspices of the NFB and the United Church. Shandel hopes that everyone who sees it will come away with "a new and critical awareness of the nationwide lottery phenomenon."

The above is a restored version of a Province interview by Michael Walsh originally published in 1980. For additional information on this archived material, please visit my FAQ.

Afterword: An artist as well as a social activist, Tom Shandel was among those who laid the foundations for today's B.C. film industry. He directed two fictional feature films, 1972's Another Smith for Paradise and Walls (aka Lock Up; 1984), both shot in Vancouver. More recently, he was a co-producer on the feature documentary The Corporation (2003), director Mark Achbar's adaptation of Joel Bakan's book examining the psychodynamics of big business. He now lives on Vancouver Island in Cowichan Bay, where he is president of Getaway Films, a company incorporated "to produce high-minded social, political and cultural documentaries."
In 2013, the Vancouver Point Grey riding (where Shandel ran as an NDP candidate in 1979), was won by the NDP's David Eby, a 36-year-old civil-liberties lawyer. Among Eby's current duties as an opposition member of B.C.'s legislative assembly is "critic for gaming." In recent weeks, he has been calling for an investigation into the suitability of a U.S.-based corporation, Paragon Gaming, to operate a casino/resort in downtown Vancouver.