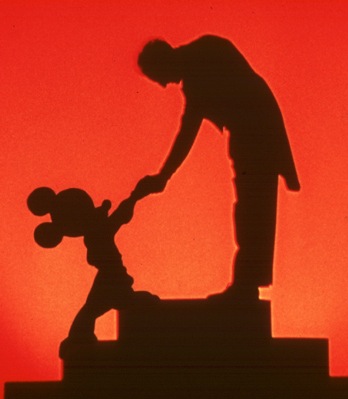 Of mice and Mussorgsky


Premiered in New York on this day (Nov. 13) in 1940, Fantasia wouldn't turn a profit for the Disney studios until 1969. A personal favourite, I just had to write about its 50th anniversary re-release.


FANTASIA. Music by J.S. Bach, Pyotr Ilyich Tchaikovsky, Paul Dukas, Igor Stravinsky, Ludwig van Beethoven, Amilcare Ponchielli, Modest Mussorgsky and Franz Schubert. Story direction by Joe Grant and Dick Huemer. Animation direction by Samuel Armstrong, James Algar, Bill Roberts, Paul Satterfield, Hamilton Luske, Jim Handley, Ford Beebe, T. Hee, Norm Ferguson and Wilfred Jackson. Running time: 125 minutes. General entertainment.
Friday, October 5, 1990
THE DWARFS MADE it possible.
In 1937, Snow White and her seven forest friends turned the business of cartooning into the art of the animated feature. The Dwarfs confirmed Walt Disney's genius. More  importantly, Snow White's box office success gave the great innovator the financial resources he needed for his most ambitious movie project.
It was inspired by music.
"Music," explained Disney, "has always played a very important part since sound came into the cartoon."
Disney, of course had produced the first-ever sound cartoon (1928's Steamboat Willie, the film that introduced the world to Mickey Mouse).
In 1929, he made the first of the Silly Symphonies, a cartoon series built around music rather than his studio's famous cartoon characters.
He described his magnum opus, conceived ten years later, as "a musical fantasy offering an opportunity for a new type of entertainment."
A  "concert feature," it included an already completed visual interpretation of Paul Dukas's The Sorcerer's Apprentice (1897). All of its animated sequences were based on orchestral classics. In planning it, Disney had a wish list of technical delights to incorporate into his Fantasia.
'"He wanted it to be seen on a wide screen," John Culhane writes in his 1983 book Walt Disney's Fantasia, "and heard in dimensional sound.
"He considered showing the abstract sequence to Bach's Toccota and Fugue [1833] in 3D, providing cardboard polaroid glasses with the program.
"He even discussed wafting flower scents through the audience as he presented a flower ballet to Tchaikovsky's The Nutcracker Suite [1892]."
And another thing. "Disney wanted the theatres to showcase Fantasia  as they had showcased [1939's] Gone with the Wind, with reserved seats and matinee and evening performances."
No mere movie, Disney saw it as an ongoing event. The program book issued for the film's premiere engagements contains this notice:
From time to time the order and selection of compositions on this program may be changed.
Disney envisioned adding new numbers to the picture every few months. (Storyboards exist for eight unfilmed items for "new" Fantasia programs.)
The reality, dubbed by Time Magazine "Disney's Cinesymphony," was somewhat more conventional. With Leopold Stowkowski conducting, and musical popularizer Deems Taylor providing commentary, the $2,280,000 production offered audiences memorable visual accompaniments to the music of Bach, Tchaikovsky and Dukas. Filling out the program were works by Stravinsky (The Rite of Spring; 1913), Beethoven (Sixth Pastoral Symphony; 1808), Ponchielli (Dance of the Hours; 1876), Mussorgsky (Night On Bald Mountain; 1886) and Schubert (Ave Maria; 1826).
Though he had to forego a number of his extravagant wishes, Disney achieved the most important of them — superior sound. The "Fantasound'' process, developed in association with RCA, was one of the screen's pioneer stereophonic sound systems.
Premiered on November 13, 1940, Fantasia was both hailed as a cinematic triumph and condemned as a musical travesty. The picture's Fantasound-equipped version opened in only 14 theatres.
The cost of such specialized electronic installations ($30,000 per theatre), mass audience resistance to the film's concept and the loss of foreign markets as a result of the European war all contributed to Fantasia's initial financial failure.
With hindsight, we can appreciate Disney's daring. His "concert film" has come to be recognized as one of animation's golden moments, a motion picture classic that stands up to repeated viewings.
As befits a great movie, Disney archivists have managed a great restoration for the picture's 50th anniversary re-release [1990]. Both the sound and the image have been returned to something very like their original brilliance. A film suitable for all audiences, Fantasia is must viewing for every true film buff.
Thursday, November 14, 1991.
MUSIC HATH CHARMS . . .
My love affair with Fantasia began in 1953, the year of its third re-release. I was eight and it was already 13.
And, yes, I liked The Mouse. But it was the dinosaurs fighting to the death through a primordial rain storm and that great mountain devil that marked me for life.
By the fifth re-release (1963), I knew the difference between mere cartoons and classic animation. I knew enough to call my favourite sequences The Rite of Spring and Night on Bald Mountain. I could drop the names Stravinsky and Mussorgsky.
Eventually, I learned about such things as stereophonic sound, the richness of the Bach, Beethoven and Tchaikovsky sequences and the Silly Symphony tradition. I also recognized that my first great cinematic love was not perfect.
Even so, the simple genius of it — great symphonic music wedded to the most energetically imaginative of the modern visual arts — remains a wonder to this day. In 24 years of professional film-going, I've seen nothing to equal it.
Last year, Fantasia marked its 50th anniversary with a "farewell tour." The jewel in animation's crown (and the feature film that I've seen more times than any other), it was being permanently withdrawn from theatrical release.
The other shoe (as Deems Taylor would say) dropped when The Walt Disney Company announced a 50-day limited home-video release beginning November 1, 1991.
(At the same time, Roy Disney Jr. announced that work had begun on "Walt's dream," a sequel called Fantasia Continued, for theatrical release in either 1996 or 1997.)
I'm not a video buff. Collecting movie "classics" is not my thing. But Fantasia hath charms . . .
On Hallowe'en morning, I checked out the ads like a kid reading a Christmas catalogue. Though the suggested retail price in the U.S. is $26.99, locally Fantasia went on sale for $19.99 (most places). Or $18.88 (The Bay). Or $16.94 (A&B Sound)!
How could I resist? One of the few movies that I've always wanted to own. Fantasia is a five-star keeper.
The love affair continues . . .

The above are restored versions of Province features by Michael Walsh originally published in 1990 and 1991. For additional information on this archived material, please visit my FAQ.

Afterword: The promised sequel didn't arrive until December 31, 1999. Called Fantasia 2000, it ran for a brief 75 minutes and offered seven new animated segments as well as a rerun of The Sorcerer's Apprentice from the original film. On the plus side, the new movie had the advantage of nearly 60 years of advances in animation technology. Indeed, it was the first animated feature to play first-run engagements on the giant screens of IMAX theatres. Working against it were those same 60 years. What had been revolutionary (and magical) in 1940 was less so on the eve of the millennium. Music and animation have enjoyed a long history together since Disney brokered their first major marriage celebration. It's a subject I'll be returning to in future Reeling Back postings.