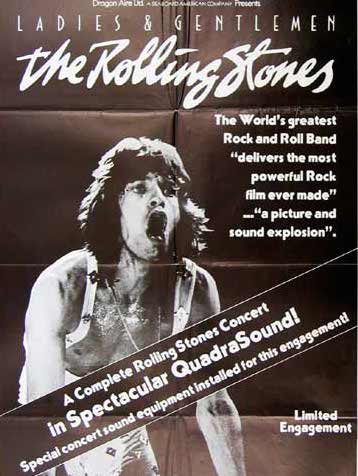 The theatrical release poster for 1973’s Ladies and Gentlemen: The Rolling Stones was not used in Vancouver because the cinema was not equipped for QuadraSound.
Appearing as themselves:
Mick Jagger
Keith Richards
Mick Taylor
Charlie Watts
Billy Wyman
Nicky Hopkins
Bobby Keyes
Jim Price
Ian Stewart


On this day (June 3) in 1972, a British rock band played a concert in Vancouver that resulted in a riot in which 31 policeman were injured. Director Rollin Binzer recorded the touring group’s later shows for his 1973 documentary Ladies and Gentlemen: The Rolling Stones.

LADIES AND GENTLEMEN: THE ROLLING STONES. Music by Mick Jagger and The Rolling Stones (Keith Richards, Mick Taylor, Charlie Watts, Billy Wyman, Nicky Hopkins, Bobby Keyes, Jim Price and Ian Stewart). Directed by Rollin Binzer. Running time: 90 minutes. General entertainment. FOR AN ESTIMATED $10,000, Famous Players could have installed a quadraphonic sound system in the Denman Place Theatre. Supersound is the one big plus that Ladies and Gentlemen: The Rolling Stones has going for it.
The theatre owner decided against it.
As a result, the overall sound quality is only marginally better than it usually is at a live concert in the Hastings street hockey hall (where the Stones performed in 1972), and considerably less impressive than a decent car stereo.
During the first half hour, I only made out one word, a repeated refrain that sounded very much like “itching.” It was a fairly accurate description of the way the band’s lead singer, Mick Jagger, was carrying on.
Filmed during the group’s 1972 North American concert tour, the movie consists of 15 numbers presented as a continuous performance. There’s no narration and no subtitles, only cuts between epiglottal close-ups and full-stage long shots.
As the film — consisting of intercut material from the four Stones' Texas concerts in Fort Worth and Houston — unspools, it becomes apparent that Jagger really does have some sort of problem. Despite several costume changes, he never seems to get his pants on straight.
Director Rollin Binzer has about as little control as the twitchy rocker, especially over his movie’s lighting. Much of the picture is shot under red and blue spotlights, giving it a murky, semi-comatose feeling reminiscent of topless joints experienced after midnight and too many drinks.

Afterword: U.S. director Rollin Binzer’s concert documentary arrived in Vancouver just 19 months after a Vancouver moment known as “The Rolling Stones riot.” Canada’s West Coast metropolis was the first stop on the British band’s “Exile on Main Street” tour, its seventh visit to the New World and the first time that it had played in the Americas since the 1969 Altamont Free Concert, a famously violent event that left at least three dead. Remembered more for its long list of arrests and injuries than its music, the 1972 tour was the subject of two little-seen movies. Binzer’s innocuous Ladies and Gentlemen: The Rolling Stones was released theatrically, but because its distributor insisted on using the “four-wall” method of cinema booking, it had an extremely limited premiere run.
The second feature, documentarist Robert Frank’s provocatively titled Cocksucker Blues, remains officially unreleased. Commissioned to celebrate the Stones’ 1972 tour, Frank was given unrestricted access to the band onstage and backstage. His cinéma vérité portrait of their drugs, sex and rock ’n’ roll lifestyle did not please the image-conscious Jagger, who went to court to prevent it from ever being seen. A four-year legal battle resulted in a surreal judgment that decreed the movie could never be screened, except under specific archival circumstances with filmmaker Frank present. Such screenings have been held as recently as January 2014 in Toronto and July 2016 in New York. As of this posting (June 3, 2017), its director is alive and 92 years old. The subject of his film, Mick Jagger, is 73 and scheduled to begin a 2017 European tour with The Rolling Stones in Hamburg, Germany on September 9.