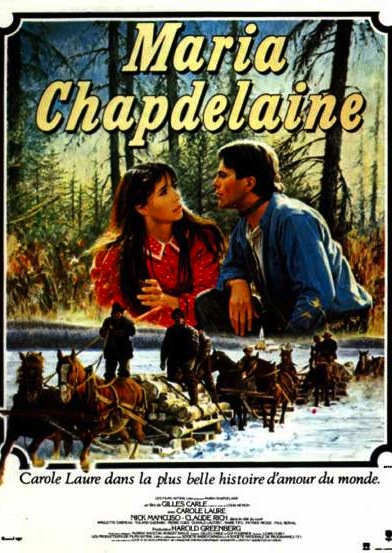 Together again: Carole Laure and Nick Mancuso are featured on the French-language poster for director Gilles Carle's 1983 feature adaptation of Maria Chapdelaine.


A Québec classic comes to life


Born on this day (May 29) in 1948, Italian-Canadian actor Nick Mancuso is a star in both official languages. Following location work in Vancouver for 1982's Mother Lode, he flew to Québec's Lac Baskatong for a leading role in the Franco-Canadian Maria Chapdelaine.

Thursday, November 24, 1983.
MARIA CHAPDELAINE. Co-written by Guy Fournier;  based on the 1913 novel by Louis Hémon. Music by Lewis Furey. Co-written and directed by Gilles Carle. Running time: 105 minutes. Mature entertainment, in French with English subtitles. SHE LIVES IN A LAND OF seasons, of genteel superstition and of demons. Though the year is 1913, Maria Chapdelaine (Carole Laure) has never seen a city, ridden in an automobile or seen a movie.
The eldest daughter of habitant farmers Samuel (Yoland Guerard) and Laura (Amulette Garneau) Chapdelaine, Maria has grown up in backwoods Quebec. Unlike the more familiar frontiers of the American West, the Lac Saint Jean region is a wilderness with a past, its traditions and history of settlement stretching back 300 years.
The grim conflict between the people and a land where "demons of discontent, of cold, of anger and of love prowl about freely" fascinated French-born author Louis Hémon. Emigrating to Canada in 1911, he lived and worked in the village that became the setting of his best-known novel.
Long considered a French-Canadian literary classic, Hémon's deeply felt story fascinated filmmaker Gilles Carle. Ten years ago, in his comedy-thriller La Mort d'un Bucheron (The Death of a Lumberjack), he puckishly named his central characters after Maria and her beloved François Paradis.
Given the opportunity to bring the originals to the screen, Carle again demonstrates the regional sensitivity that has made him Canada's best director. His adaptation compresses the two and a half years of the novel's story into a single set of seasons, the year of Maria's choice.
At the beginning of her 23rd spring, pretty, demure Mlle Chapdelaine has three suitors. Least likely is Eutrope Gagnon (Pierre Curzi), a born farmer. Dutiful but slow, he is a sincere soul, as solid and dull as a rock.
Lorenzo Surprenant (Donald Lautrec), by contrast, offers her all the temptations of the outside world. Determined to assimilate into the dominant culture, he's sold his late father's farm and moved to urban Massachusetts. When he returns for visits, it is to pay court to Maria.
In her heart, though, Maria truly loves only François Paradis (Nick Mancuso), the dashing young coureur de bois. A lumberjack and trapper, he is the only one who can turn her sparkle into fire as she smoulders on the edge of passionate womanhood.
To this period material — Hémon's novel was the romantic best-seller of its day — Carle brings his own intense feeling for the land and its people. With an understanding and flair for detail unmatched by previous film versions, he brings Maria's story alive within the landscape that shapes her fate.
Made in co-operation with Radio-Canada and France's TF 1, Carle's picture was shot as a four-part, four-hour television mini-series, which has been condensed into this theatrical feature. Looking at the big-screen cut makes one envious of the overseas televiewers treated to his epic in its entirety.

Afterword: Maria Chapdelaine was the second of four features in which Mancuso co-starred with Québec actress Carole Laure. Their previous pairing was in director Gilles Carle's first English-language movie, 1975's A Thousand Moons. Before their reunion, he tried his luck in Hollywood — Mancuso was top-billed in director Arthur Hiller's 1979 thriller Nightwing — while she gained fame in France, where she starred in Bernard Blier's Get Out Your Handkerchiefs (1978), winner of a best foreign film Oscar. Following Maria Chapdelaine, the American independent filmmaker Bobby Roth brought them together in Los Angeles for his 1984 urban drama Heartbreakers. Finally, Laure's composer-director husband, Lewis Furey, cast them as artist and muse in the Québec musical fantasy Night Magic (1985). In recent years, Mancuso has demonstrated his dark side, playing the title role in director Gwyneth Gibby's made-for-TV biography of the Marquis de Sade. He went even darker as Franco Macalousso, a.k.a. The Antichrist, in the features Revelation (1999), Tribulation (2000) and Judgment (2001). The three pictures were sequels to 1998's Apocalypse, a post-Rapture thriller produced by St. Catharines, Ontario-based Cloud Ten Pictures.