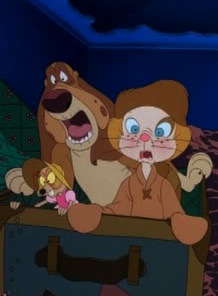 
The energy that made her a Broadway star was evident in her second screen career, that of cartoon voice performer. Born on this day (February 20) in 1946, Sandy Duncan played the mouse Peepers in director Don Bluth's 1992 feature Rock-A-Doodle.

Sunday, April 5, 1992.
ROCK-A-DOODLE. Written by David E Weiss. Inspired by Edmond Rostand's play Chantecler (1910). Music by Robert Folk. Directed by Don Bluth. Running time: 74 minutes. Rated General with no B.C. Classifier's warning. HEY, KIDS, THIS ONE'S for you.
Rock-A-Doodle is the first movie in a long, long time that's just right for all you preteens. It was made by people who understand that "tying shoes is harder than dry dog food."
There's a friendly old farm dog in it named Patou. He's the one having trouble with his shoelaces and, because this is a cartoon feature, he speaks with the voice of an actor named Phil Harris.
Patou tells us the story of a homesick rooster named Chanticleer (with Glen Campbell's voice), who is tricked into leaving the farm.
It's also the story of an eight-year-old farm boy named Edmond (Tony Scott Ganger), who's turned into a kitten by the Grand Duke (Christopher Plummer), an evil owl with magic powers.
Because he's a night bird, the Grand Duke hates the daylight. He knows that without Chanticleer to wake up the sun, there will be darkness and storms.
Edmond knows that all the farm folk need Chanticleer back to save the countryside from the Grand Duke's plan. He leads a small group of animals that includes a bright little mouse named Peepers (Sandy Duncan) and an annoying magpie named Snipes (Eddie Deezen) to the city to find their rooster.
Rock-A-Doodle is the kind of film that kids can take their parents to see. Just tell Mom and Dad that the picture was directed by Don Bluth, the man who made The Secret of NIMH and All Dogs Go to Heaven.
For a while, Mr. Bluth made movies with Steven Spielberg. Their pictures together were An American Tail and The Land Before Time.
They didn't get along very well because Mr. Bluth has much better cartoon ideas than either Mr. Spielberg or any of the people now working for the Walt Disney Company.
Tell your parents that Rock-A-Doodle combines fine Irish blarney, brash old Warner Brothers energy and classic Disney wholesomeness. That means that it has an interesting story that is fun to watch because it has good jokes, the right music and a lot of really neat surprises.
You can also tell them that Chanticleer dresses and sings like Elvis Presley. Mr. Presley was a rock star that old people remember, and who they sometimes still see in doughnut shops.
Rock-A-Doodle is an early Easter treat.

Afterword: By the time she made Rock-A-Doodle, Texas-born Sandy Duncan was well into her second career as a cartoon voice performer. The movies first "discovered" the elfin dynamo starring opposite Judy Carne in the 1970 Broadway revival of The Boy Friend. She made her big screen debut co-starring with Dean Jones in a Disney feature, The Million Dollar Duck, followed almost immediately by The Star-Spangled Girl (both 1971). Her success seemed inevitable, and she had her own two-season TV show, called Funny Face (1971), then The Sandy Duncan Show (1972). Medical problems — she lost the vision in her left eye to cancer — and marital problems contributed to a major slowdown in her Hollywood momentum. She eventually returned to the New York stage to play the title role in a long-running Broadway revival of Peter Pan (1979-1981). She made her animated feature debut in 1981, providing the voice of Vixey, beloved companion of Tod, the title character in Disney's The Fox and the Hound. She returned to the Disney recording studios for 1994's The Swan Princess. Showing little interest in retirement, Duncan continues to add live-action film, television and stage roles to her resume. In May, 2014, for example, she played the title role in a North Carolina Theatre revival of Driving Miss Daisy.