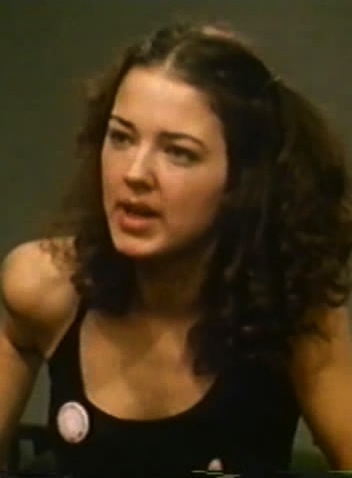 After seeing the release version of the 1981 documentary feature Not a Love Story, Fonda Peters, aka Lindalee Tracey, wrote that she felt "betrayed and sickened" by its claim to be her story.


Not a lot of honesty or nuance here


In the current issue of his Cinema Sewer magazine, sinema historian Robin Bougie recalls the controversial 1981 NFB documentary Not a Love Story: A Film about Pornography, memories similar to those of Reeling Back.

The above are restored versions of two Province reviews by Michael Walsh originally published in 1981 and 1982. For additional information on this archived material, please visit my FAQ.

Afterword: Robin Bougie is among the small army of guests who will be appearing at the 2014 FanExpo Vancouver, April 18-20. He's part of the event's comics component, and will probably have issues of the latest Cinema Sewer (featuring his take on Not a Love Story) available for sale.
There are two important things that I have learned since my first encounter with Not a Love Story. Lindalee Tracey, the Canadian stripper "Fonda Peters" who is shown to have been "redeemed" for feminism by her encounter with pornography during the making of the documentary, was "betrayed and sickened" by the film. A complex, multifaceted talent, Tracey described her experience with the production in the 10th and final chapter of her 1997 autobiography, Growing Up Naked: My Years in Bump-and-Grind (Douglas & McIntyre). She went on to become an accomplished writer and documentary filmmaker in her own right, a champion of difficult and nuanced issues such as poverty and immigration. Together with her husband, Peter Raymond, she was the creator of the three-season CBC-TV drama The Border (2008-10), among the best shows to appear on Canadian television. Her death in 2006, from cancer at the age of 49, was a tragic loss.
The second important thing that time has taught me is that I have to respect Bonnie Sherr Klein for two outstanding contributions to Canada and the world: her children. Klein's son Seth is the B.C. director of the progressive research institute, the Canadian Centre for Policy Alternatives, and a tireless advocate for positive social change. Her daughter Naomi is an author, filmmaker and all-around national treasure whose books (including 2000's No Logo and 2007's Shock Doctrine) offer eye-opening analyses of how the modern world works.