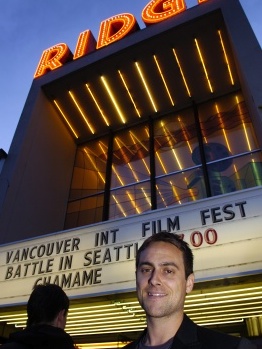 
People aware that the WTO is bad


The smell of tear gas still hung in the air of the Emerald City on this day (December 3) in 1999. The “Millennium Round” of the World Trade Organization had come to naught, in part because of the mass street protests recalled in writer-director Stuart Townsend’s 2007 feature Battle in Seattle.

BATTLE IN SEATLE. Music by Massive Attack. Written and directed by Stuart Townsend. Running time: 98 minutes. THE PHRASE “PYRRHIC VICTORY” comes to mind. A week of street protests in late 1999 focused attention on the somewhat shadowy international body known as the World Trade Organization, and contributed to the collapse of its “millennium round” of negotiations.
The anti-globalization movement, already a decade old in Europe, became a presence in the U.S. as a loose coalition of environmental activists and trade union members. They gathered in the Pacific Northwest to oppose the WTO, the group that represented the expansion of multinational corporate rule.
A scene toward the end of first-time director Stuart Townsend’s 2007 docudrama, Battle in Seattle, sums up the mood of the moment. “A week ago, nobody knew what the WTO was,” jailed animal-rights activist Django Mills (André Benjamin) tells his badly beaten cellmate, protest leader Jay Elgin (Martin Henderson).
Outside in the street, they can hear a crowd chanting: “The people united will never be divided.”
Smiling, Django adds cheerfully: “Now, they still don’t know what the WTO is, but at least they know it’s bad . . .”
In late 2006, when Irish-born director Townsend arrived in Vancouver to shoot his independently-made feature, he was afraid that the people were no longer united, and that the memory of the event that brought them together was all but lost. He also was determined that his picture should be fair.
Battle in Seattle opens with a mock newsreel offering a brief history of the four-year-0ld intergovernmental regulator, and civil society’s objections to its “free trade” goals. The movie’s story begins with the preparations being made in Seattle for the WTO’s 1999 meeting, with the scene shifting between two meetings.
In a war room-like office, Police Chief Faherty (Garry Chalk) briefs Mayor Jim Tobin (Ray Liotta) on the persons of interest among the protestors. As he displays their files, we are introduced to Mills, Elgin, activist Louise Phillips (Michelle Rodriguez) and civil rights attorney Samantha Clayton (Jennifer Carpenter), seen conferring in their college dormitory headquarters.
Historically, we know that Seattle deployed a small army of cops outfitted in storm trooper-like riot gear to control an estimated 50,000 avowedly non-violent protestors who’d come from around the world. Working hard to be balanced — police are people too — director Townsend includes among his characters a soulful cop named Dale (Woody Harrelson) and his pregnant wife, Gap sales clerk Ella (Charlize Theron).
Included among the core characters is Jean Asbury (Connie Nielsen), a cynical television reporter who will suffer a crisis of conscience as the street confrontations spiral out of control. To drive home the point that the WTO’s agenda is less than altruistic, we are shown two frustrated conference attendees, the well-meaning Dr. Meric (Rade Serbedzija), representing the NGO Médecins Sans Frontières (Doctors Without Borders), and Abasi (Isaach De Bankolé), arguing the case for third-world nations.
As might be expected from a film with so much going on, there’s not a lot of character development. Townsend compensates for the constant shift of perspective by maxing out on the domestic drama and amping up the raw emotion.
“How do you stop those who stop at nothing?” lawyer Clayton laments after seeing the increasingly belligerent response of paramilitary police to the peaceful protests.
Townsend wants to celebrate that moment in 1999 when a democratic renewal seemed possible and the people —  “Turtles & Teamsters, They’re Together At Last” read one L.A. Times headline — won their first victory in opposition to the globalists. History suggests that the results were otherwise.
Uncomfortable performing in the spotlight, the WTO retreated into the shadows. Security protocols for future meetings were revised and, in a happy coincidence for the group, the public conversation in the U.S. shifted to other matters.
Exactly one year later, Americans were in suspense about the results of their November 7, 2000 presidential election. The contest was not decided until December 13, the day Al Gore, winner of the popular vote, conceded to George W. Bush, the electoral college victor. Two years later, they were in shock from the events of September 11, 2001.
An action by 19 members of the jihadist al-Qaeda organization —15 of them from Saudi Arabia, two from the United Arab Emirates and one each from Egypt and Lebanon — had reduced New York’s World Trade Centre to rubble. My most vivid recollection of the attack’s aftermath was Bush’s September 14 visit to ground zero where he smirked as he declared himself “a wartime president.”
Thus began the so-called “war on terror,” which led to the U.S. invading Iraq and Afghanistan. Domestically, the colourfully named USA Patriot Act became the tool used by the newly established Department of Homeland Security to create an American surveillance state.
Stuart Townsend intended his Battle in Seattle to be a call to renewed action. “It’s about participation,” he said in a 2008 interview with Cineaste Magazine. “Ultimately, I just want the film to inspire people.”
Today, his film seems less a call to arms than a remembrance of a time past when resistance not only seemed possible but necessary. It is a time we may never see again.


The above is an original Reeling Back review by Michael Walsh originally published in 2019. For additional information on this archived material, please visit my FAQ.

Afterword: Although the 1999 “battle in Seattle” is credited with being the great moment for the global justice movement, Vancouver set the stage. In November 1997, our city played host to an Asia-Pacific Economic Cooperation (APEC) summit. About 2,000 demonstrators turned out to voice their opposition to its “free trade” agenda. In a 2017 interview with CBC News, Canadian author and social analyst Joel Bakan called the local direct action “the first in a chain of anti-globalization protests.”
Here’s a small irony. Director Stuart Townsend’s Battle in Seattle was filmed over six weeks in 2006 on location in Vancouver. Scenes were shot on the campus of the University of British Columbia, the site of the earlier APEC gathering (where RCMP had famously pepper-sprayed protesters). Upon completion, the picture was seen mainly on the festival circuit, where it received generally sympathetic reviews. In the absence of a broad release, it failed to make back its budget, and remains Townsend’s single directorial credit. Returning to acting, he continued to be a successful television and film performer. In 2008, he was back in Vancouver co-starring in director Marcos Siega’s romantic comedy Chaos Theory. Currently, he is in pre-production for Two Minutes to Midnight, a conspiracy thriller being developed by Canadian writer-director Stephen Wallis for release in late 2020.