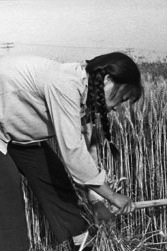 The land tended by Wuxing's farmers yields 70 per cent more wheat per acre than a comparable piece of land in Canada, according to the NFB's 1980 documentary North China Commune.


Documenting life in another land


Today (February 19) is the first day of the year 4712 (or, some say, 4652) on the Chinese calendar. It's the Year of the Goat (or, some say, the Sheep), and to mark the occasion Reeling Back recalls the National Film Board of Canada's superb 1980 documentary feature North China Commune

Thursday, February 14, 1980.
NORTH CHINA COMMUNE. Documentary feature researched and written by Boyce Richardson. Narrated by Donald Sutherland. Directed by Tony Ianzelo, Running time: 80 minutes. THE OPPORTUNITY WAS UNIQUE. The problems were awesome. The results are splendid.
North China Commune is in the best tradition of documentary filmmaking. A close-up view of contemporary China [1980], it is informative without being inflammatory and stimulating without sensationalizing.
A series of meetings between National Film Board and Chinese ministry of culture officials created the opportunity. An exchange program was devised that would give a crew of Canadian documentarists the chance to take a good, long look at day-to-day life in the People's Republic.
Since 80 per cent of China's people live in rural settlements, the NFB asked for permission to film in a commune, one located in a part of the country where the climate and crops are similar to Canada's. The Chinese had to be convinced that what their visitors were looking for was not a show piece, but an  average, typical commune, representative not of the ideal, but of reality,
There was a problem because the two nations have very different ideas of how a government film unit should work. In China, the Central Newsreel and Documentary Film Studio speaks with the government's voice, producing pictures that are didactic and propagandistic.
The NFB, at its best, represents the hands-off ideal. Says North China Commune's writer and co-director Boyce Richardson: "We were never given any orders by the people who sent us."
"(The Chinese) kept asking us 'what do you want?' " says cameraman and co-director Tony Ianzelo. "Officials kept asking 'where's your script?' "
The Canadians' purpose, simply stated, was "to show what the hell it's like to be living in China today."
"Reality" is the Wuxing commune, some 240 kms south of Peking [Beijing], and 40 kms from the provincial capital of Shijiazhuang. Five Canadians (Ianzelo, Richardson, assistant cameraman John Dyer, electrician Guy Remillard and soundman Hans Oomes), together with an entourage of up to 15 Chinese officials, commuted daily for more than a month to record a harvest cycle.
Wuxing is a self-sufficient community of 14,500 people who farm 3,000 acres. Its soil and climatic conditions are similar to those of Southern Ontario.
North China Commune works hard to maintain a low-key, matter-of-fact tone. Actor Donald Sutherland, who speaks the narration, was asked for a "flat, intelligent, interested reading, something in tune with the images."
His narration consists of facts rather than opinions. "We tried not to impose our Western intellectual baggage on their society," Richardson says. "If different people get different things out of this film, so be it. We're not in the business of telling people how to think."
Instead, he says, the film is designed to "challenge audiences to think for themselves."
It does. Among the remarkable facts offered for our consideration:
*     Wuxing commune's 3,000 acres yield 70 per cent more wheat per acre than a comparable piece of land in Canada. (Richardson, a former newspaperman, checked figures from several independent sources, and tested them repeatedly before coming to that amazing conclusion.)
*    Though it has no sewage system, Wuxing is preternaturally clean. Everything is recycled, including human and animal excrement. Night-soil — 100,000 metric tons a year — is returned to the land, which is increasing in fertility while providing two crops a year.
*    Although all night-soil is eventually returned to the land, some homeowners keep it around just long enough to extract the methane. By using this form of natural gas for cooking, a household can save a ton of coal a year.
The Chinese constitution guarantees every citizen five things: food, clothing, shelter, medical treatment and a burial. There is no unemployment, and those who can't work are provided with a standard of living equal to the community average.
In interviews, various members of the commune assure us that things have never been better. Interestingly, it is the older people, the folk with pre-Communist (or "pre-Liberation") memories who are the most enthusiastic.
The younger Chinese, with no pre-1949 memories, are less outspoken. Here the film hints at future problems within the People's Republic. What happens when a generation that has never wanted for the essentials decides that it wants even more?
North China Commune touches on a whole range of contemporary issues. We see how another society handles energy, unemployment, and housing questions. And, in the best tradition of the NFB, we get to make up our own minds about it.

Afterword: At the time of the North China Commune premiere, I was working as the B.C. correspondent for Variety, the New York-based entertainment trade paper. Since Vancouver's  February 1 screening was among the film's first, I contributed the item that became that publication's opinion on the picture. Read together, the two notices show the difference between a review written for a general public concerned with entertainment values, and industry readers focused on the bottom line.

TAKING ADVANTAGE OF A RARE opportunity, Canada's National Film Board sent a top-flight production team for a month-long look at life in the People's Republic. The result, "North China Commune," is documentary filmmaking at its best, offering a no-nonsense close-up of contemporary China.
A text-book study in journalistic objectivity, the picture is a fact-filled feature that is informative without being inflammatory, and stimulates thought without sensationalizing. Sophisticated audiences, particularly in college and specialty film situations, will appreciate the straightforward approach, sans special pleading to either the left or the right.
The opportunity came as a result of meetings between the NFB and Chinese ministry of culture officials. An exchange program was devised and both nations played host to one another's government-sponsored filmmakers.
The production reunited director/cameraman Tony Ianzelo, a 20-year NFB veteran, with freelance writer/director Boyce Richardson, 25 years a journalist. The team previously produced the prize-winning 1974 documentary, "Cree Hunters of Mistassini."
(Among Ianzelo's other credits are "High Grass Circus" and "Blackwood," both nominees for the best short subject Oscar.)
Since 80% of China's people live in  rural settlements, the team asked for permission to film in a commune, one located in a part of the country where the climate and crops are similar to those in Canada. What they wanted, and eventually got, was an average, thoroughly typical collective, one that would fairly represent not the ideal but the reality.
"Reality" is the Wuxing commune, some 240 kms south of Peking and 40 kms from the provincial capital of Shijiazhuang. Five Canadians  (Ianzelo, Richardson, asst. cameraman John  Dyer, electrician Guy Remillard and soundman Hans Oomes) and an entourage of up to 15 Chinese officials commuted daily from the nearby city for more than a month to record a harvest cycle.
In exploring the minutiae of everyday life, the filmmakers made some amazing discoveries. Though it has no sewage system, Wuxing is incredibly clean. Absolutely everything is recycled, including body wastes. All human and animal excrement — about 100,000 metric tons a year — is returned to the land, which is actually increasing in fertility while producing two crops a year.
In a series of interviews, the filmmakers heard that things have never been better. Filmgoers will notice, though, that it is the older people, the commune members with pre-Communist (or, as they, phrase it, "pre-Liberation") memories who are the most enthusiastic.    The younger Chinese, the generation with no pre-1949 recall, are less outspoken. Without coming right out and saying it, the film makes it clear that there are problems even within this highly motivated society.
The narration, spoken by actor Donald Sutherland, works hard to maintain a low-key, matter-of-fact tone. Although "North China Commune" touches on a host of contemporary topics — energy, housing, unemployment, medical care, population control — it forces no conclusions on its audience. It is a documentary in the best sense.

The above is a restored version of a Variety review by Wals (Michael Walsh) originally published in 1980. For additional information on this archived material, please visit my FAQ.

Afterword: A national treasure, the NFB was founded in 1939, a time when Canada had no domestic film industry, to "show Canada to Canadians." Over the years it has provided a home to artists and scholars, as well as journalists and innovators, all of whom shared a keen sense of public service. North China Commune was shot in 1979, the year that the United States finally recognized the existence of the Peoples Republic (Canada had done so in 1970). It was one of two features Tony Ianzelo and Boyce Richardson made during their time in the Far East, the other being a look at the emerging nation's urban industrialization, called North China Factory. Last year, during its 75th anniversary celebrations, NFB partisans pointed proudly to the fact that Board productions have been nominated for Hollywood's Academy Award on 72 occasions, with 11 wins. This year, Me and My Moulton is a nominee in the animated short film category, the third nomination for a work by the NFB's Torill Kove.