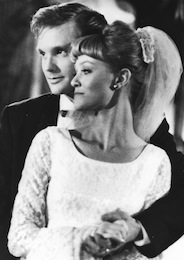 
John Wildman earned a place in Canada's film history playing the title role in director Sandy Wilson's award-winning 1985 memoir, My American Cousin. Born on this day (November 7) in 1960, he returned to B.C. to reprise his Butch Walker character in the sequel, American Boyfriends (1989).

Friday, October 20, 1989.
AMERICAN BOYFRIENDS. Music by Terry Frewer. Co-produced, written and directed by Sandy Wilson. Running time: 92 minutes. Mature entertainment with the B.C. Classifier's warning: some coarse and suggestive language; occasional suggestive scenes. IT HAPPENS IN THE cherry-red Cadillac Eldorado.
Daryl (Scott Anderson), resplendent in his U.S. Marine Corps uniform, tells her that he's about to ship out for Vietnam.
Lizzie (Delia Brett) knows that she might never see him again. For her, it's both time and "the first time".
And now, it's the morning after.
With the dawn's early light, she returns to the Portland motel room that she's sharing with her girlfriends. "Do I look any different?" Lizzie asks.
"Yeah," says Thelma (Michele Bardeaux), choosing her words very carefully. "You look more . . . womanly ."
"You just look tired," says Sandy Wilcox (Margaret Langrick), less touched by the romance of the moment. Seventeen and in her first year at Simon Fraser University, she's more impressed with her girlhood friend's decisiveness.
"I can't believe it," Sandy says a few minutes later. "Just like that, she's taken her destiny into her own hands."
Remember the cherry-red '57 Cadillac? Four years ago, writer-director Sandy Wilson made it the centrepiece of her charming first feature, My American Cousin.
For 12-year-old Penticton rancher's daughter Sandy Wilcox (Langrick in her acting debut), it was a vehicle of dreams. For her brash, 16-year-old California cousin Butch Walker (John Wildman), it was his means of escape.
Set in the summer of 1959, Wilson's serio-comic picture was the Canadian film success of 1985. This year, she completed a sequel, a look at the fall of 1965 called American Boyfriends.
Do I look any different?
In central Canada, where it premiered at Toronto's Festival of Festivals, the tendency was to echo the movie Sandy's reaction to post-virginal Lizzie, and affect disappointment.
For me, though, Thelma's line is closer to the truth. The characters are older and more complex, the time setting has changed significantly and Wilson's movie is, as a result, more womanly.
As before, the picture reflects Sandy's point of view. Where she once passively welcomed the excitement of the Canadian-American culture clash, she now actively seeks it out.
A darker vision with a darker look, American Boyfriends involves its characters in encounters with sex and death. More diffuse, it reflects a time when a self-absorbed generation mixed up personal feelings of mission and desire with self-righteousness and self-preservation.
"I'm thinking of joining the Peace Corps," Sandy tells her socially-aware SFU roommate Julie La Belle (Liisa Repo-Martell). "But I'm also really interested in interior decorating."
Sandy's decision to attend Butch's wedding in Oregon sets the story in motion. Together with Sandy's Penticton friends Thelma and Lizzie, the co-eds head south in search of adventure.
They arrive just in time for the reception. Touched, Sandy's American cousin (Wildman reprising the role), surprises her with a gift — the keys to his aging but still elegant Eldorado.
"Do yourself a favour," Butch advises her. "Get laid. Enjoy your freedom while you still have it."
When Lizzie announces that she's moving in with her marine, the die is cast. With the fin-tailed convertible's top down, Sandy and Julie head for the beaches of Southern California.
"Dear diary," Sandy says in the film's opening moments, "love changes everything." In other words, American Boyfriends is not a remake of My American Cousin.
Different in mood and style, it is evocative and individual. Here, an edgy adolescent desperation replaces the easy charm of Wilson's first feature.
Honest and intriguing, the direction of Sandy's growth is very much in touch with the distinct society that is B.C.

Afterword: With American Boyfriends, Sandy Wilson created something really special: the women's road picture. Yes, a case could be made for Martin Scorsese's 1974 feature Alice Doesn't Live Here Anymore, with Ellen Burstyn and the 11-year-old Jodie Foster, but no real sub-genre  emerged until after Wilson's picture. Rereading my 1989 review reminded me that Sandy's Penticton friends are "Thelma and Lizzie." As it turns out, that is not an echo but a foreshadowing. Wilson's movie predated director Ridley Scott's notorious Thelma and Louise (1991) by two years, and Edward Zwick's carefully nuanced Leaving Normal (1992) by three.
Actor John Wildman had taken part in My American Cousin's sweep at the 1986 Genie Awards. He received the best actor honour, his co-star Margaret Langrick was named best actress, while writer-director Wilson collected screenplay and direction trophies and the best picture award. Later the same year, he was profiled in a People Magazine article headlined "My American Cousin's John Wildman Shapes Up as Canada's James Dean." At the time, he was appearing as Neil Campbell, eldest son of frontier physician James Campbell and a principal player in the four-season TV series The Campbells (1986-1990). His talent, recognized by the Academy of Canadian Cinema and the People reporter, did not win him major feature film roles. After his appearance in American Boyfriends (a film that did not do well at all), the Toronto-based actor worked in television and independent features. Recently, he's been dividing his time between acting, movie location scouting and doing upscale home renovations. John Wildman celebrates his 55th birthday today (November 7).