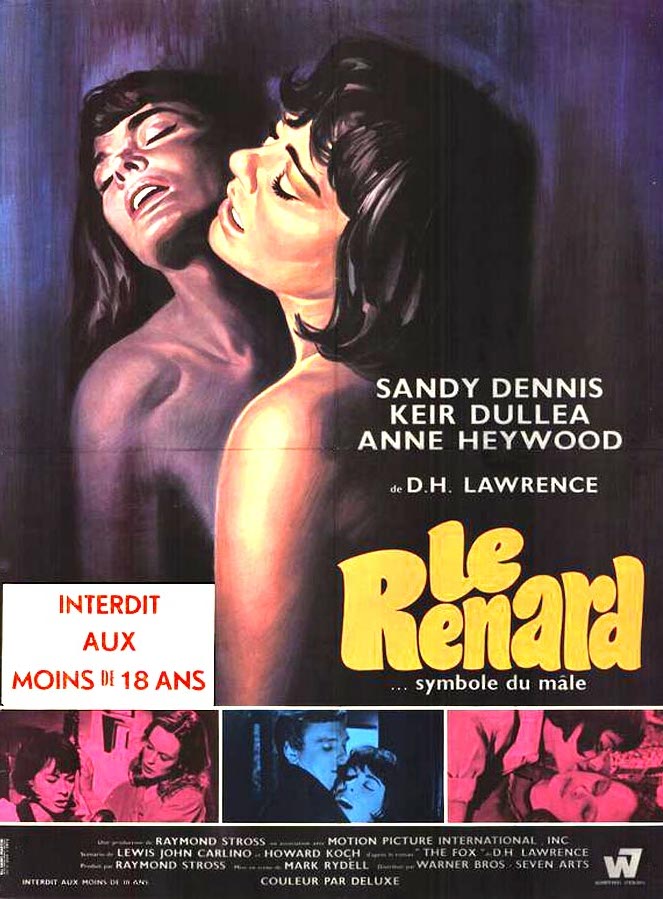 Actress Anne Heywood was featured on the poster for director Mark Rydell’s 1967 feature The Fox used in French-language markets.


Best known for bringing together Henry and Jane Fonda in the father-daughter drama On Golden Pond, director Mark Rydell was born on this day (March 23) in 1929. Originally an actor, Rydell paid a visit to rural Ontario to shoot his directorial debut feature, 1967’s The Fox.

THE FOX. Written by Lewis John Carlino and Howard Koch. Based on the 1922 novella by D.H. Lawrence. Music by Lalo Schifrin. Directed by Mark Rydell. Running time: 110 minutes. Restricted entertainment with the B.C. Classifier’s warning: some nudity and suggestive scenes. IF THE HIPPIE MOVEMENT is ever traced to its roots, its beginnings may well be found in the writings of David Herbert Lawrence, the early 20th century prophet of natural love. Of more dubious descent is The Fox, an overwrought and pretentious little film that bears his name.
Based on a novella by Lawrence, The Fox is the story of Ellen March (Anne Heywood) and her awakening to love. She is a young woman who finds herself at the apex of a triangle, torn between her friend and business partner Jill Banford (Sandy Dennis) and Paul Renfield (Keir Dullea), the sailor who courts her.
Running a chicken farm in backwoods Canada, the women only discover the true nature of their bond when their idyll is broken by the arrival of the man. His disruptive influence is unsubtly symbolized by a marauding fox’s attack on their henhouse.
Suddenly, the suppressed passions of the trio are given release.
Unfortunately, the indelicate film falters where it should be strongest — in its characters. Dullea leers woodenly through a part that demands sensitivity. Dennis, whose Jill seems to  suffer from a perpetually runny nose, sniffles, squeaks and stumbles about in her own uniquely annoying way.
Only Heywood seems in the least suited to her complex role. And even her competent performance is wasted in the haze of the film’s self-conscious meaningfulness. Ellen’s loves are as hollow and joyless as her two lovers.
Filmed in Kleinburg, a rural community northwest of Toronto, The Fox is occasionally mistaken for a Canadian movie. Audiences should not be deceived by a picturesque CNR siding, though.
Hardly an honest beaver, this film is nothing but an American goat in fox’s clothing.

Afterword: Before Mark Rydell went on location in Kleinburg, the works of D.H.Lawrence (1885-1930) had inspired just two movie adaptations. The first, director Marc Allégret’s 1955 French-language L’amant de lady Chatterley, was based on Lawrence’s notorious banned novel, Lady Chatterley’s Lover, and was itself the subject of a landmark censorship case when it was banned in New York. The second, English director Jack Cardiff’s 1960 feature Sons and Lovers, was better received in the U.S., earning a best picture Oscar nomination. An outlier in his lifetime, Lawrence was among the literary heroes of the counterculture embraced by a post-Second World War generation in the 1960s.
In the above review, I referred to “the hippie movement.” Rydell’s 1967 film was a genuine artifact of its year, forever remembered in the popular culture as the “Summer of Love.”