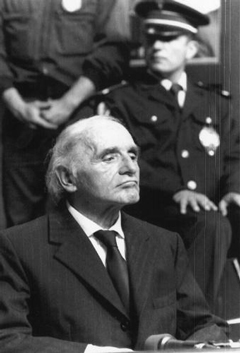 In the dock, an unrepentant defendant listens to the charges against him in Marcel Ophuls’s 1988 documentary, Hôtel Terminus: The Life and Times of Klaus Barbie.
Narrator: Jeanne Moreau


On this day (May 11) in 1987, 67-year old Nikolaus “Klaus” Barbie, the Gestapo chief known as “the butcher of Lyon,” went on trial in France. His crimes during and after the Second World War are examined in director Marcel Ophuls’s 1988 documentary Hôtel Terminus.

Friday, February 3, 1989.
HÔTEL TERMINUS: THE LIFE AND TIMES OF KLAUS BARBIE. Documentary produced and directed by Marcel Ophuls. Running time: 266 minutes. Mature entertainment with no B.C. Classifier’s warning. IN THE END, HE stood alone in the dock. An old man, Klaus Barbie appeared tired and indifferent to the charges against him.
He stood accused of “crimes against humanity.” Apprehended in 1983, Barbie was the Second World War’s “Butcher of Lyon.” He had escaped justice for nearly 40 years.
For documentarist Marcel Ophuls, the picture was incomplete. A Barbie cannot exist in isolation.
Such crimes require accomplices; his prolonged freedom, the active help of friends and associates.
In Hôtel Terminus: The Life and Times of Klaus Barbie, the award-winning filmmaker relentlessly assembles the pieces of the old monster’s puzzle. A masterful inventory of interviews and actuality footage, Ophuls’s Rashomon-like inquiry interweaves tales of individual courage, commitment and tragedy with evidence of complicity and moral cowardice.
Take, for example, the story of the “Monastery Route.” Used by the Western Allies in the post-war period, it was operated by the Vatican with the co-operation of the International Red Cross.
An underground railway for politically sensitive refugees, it took its name from the fact that “there were several priests involved,” a former American intelligence officer recalls. It was used to spirit those refugees out of Europe for destinations in the New World.
Perhaps the Churchmen thought they were helping Christian soldiers escape persecution. The Americans, with fewer illusions, called it “the rat line.”
In 1951, Klaus Barbie and his family were routed along it to Bolivia.  His 10 years in Hitler’s SS certainly gave him rat status. Five more years in the pay of the U.S. Army's Counter Intelligence Corps earned Barbie a place on the line.
Though he was wanted by the French for war crimes, Washington and Rome conspired to obstruct justice and relocate him. In one sense, of course, this is old news.
In another, Ophuls's harrowing report is a story not of the past, but of the present. As Ronald Reagan's “hero,” Marine Col. Oliver North, goes on trial for his role in the  Iran-Contra scam, it should be noted that men with Barbie-like dedication to führers and their philosophies are with us still.
Nor did Barbie's criminal career end in 1944. Not one to fade into suburban retirement, the one-time torturer enjoyed new success as an arms dealer and Vietnam war profiteer.
In South America, he became an advisor to rightist military juntas and the confidant of dictators, teaching them how to operate their own Gestapo-like internal security forces. Moving with the times, he would eventually serve a powerful new elite, the Latino drug lords.
Insisting that we attend to the lessons of Barbie's tale is Ophuls, a director who uses film to probe the heart of darkness. Though more immediate (and, truth to tell, more hectoring) than his classic The Sorrow and the Pity (1969), Hôtel Terminus is every bit as compelling an addition to the cinema of conscience.
And as long. With a running time of 266 minutes,  it is its own double feature.

Afterword: Among the issues addressed in Marcel Ophuls’s Academy Award-winning documentary feature is that of service. We call members of the military “servicemen.” Klaus Barbie, conscripted into the Nazi labour service, joined the Schutzstaffel (SS) in 1935, where he served the cause of racial purity and national security. Convicted in 1987 of “crimes against humanity," he was sentenced to life imprisonment. He died in the Lyon jail in 1991.
Oliver North, a graduate of the United States Naval Academy and a Vietnam War combat veteran, served President Ronald Reagan by providing illegal, covert support for the so-called Contras, a terrorist group committed to overthrowing the government of Nicaragua. His 1988 trial was headline news, and his May 4, 1989 conviction came shortly after Hôtel Terminus  was shown in Vancouver. Like Barbie, North had friends in high places and his conviction was reversed and all charges dismissed in 1991. He made a 1994 run for the U.S. Senate — he was narrowly defeated by Democrat Chuck Robb — and went on to success as a radio talk-show host (1995-2003) and author of best-selling books aimed at his right-wing constituency. Continuing to “serve,” Oliver North, 73, is currently on the board of directors of the National Rifle Association (NRA).
Service is a concept much in the news at the moment. Two days ago (May 9, 2017), U.S. President Donald Trump fired Federal Bureau of Investigation director James Comey. Although the reasons for his dismissal have yet to be reliably determined, the all-news networks are treating it as a seismic moment for American democracy. That this story is breaking as I prepare this posting reminds me of a Marshall McLuhan quote from 1967: “Ours is a brand new world of all-at-once-ness. 'Time’ has ceased, ’space’ has vanished. We now live in a global village . . . a simultaneous happening.”
Service was the driving force in the work of Marcel Ophuls. The son of celebrated French moviemaker Max Ophuls, Marcel made his mark in non-fiction film. Ideally, documentary is a quest for the truth, and his enquiry into Second World War collaboration in Nazi-occupied France, Le Chagrin et la pitié (The Sorrow and the Pity) represented the genre at its best. Nominated for an Oscar in the documentary feature category in 1972 — it lost to The Hellstrom Chronicle, a slick look into the world of insects played as a science-fiction jeremiad — it is credited with changing the popular narrative in France about what had really happened during the war. Hôtel Terminus was every bit as influential. In 2014, Ophuls turned his attention to Israel’s occupation of Palestinian lands, announcing a new film called Unpleasant Truths. Retitled Let My People Go in 2015, the project then dropped from sight. If completed, it does not appear to have been released.