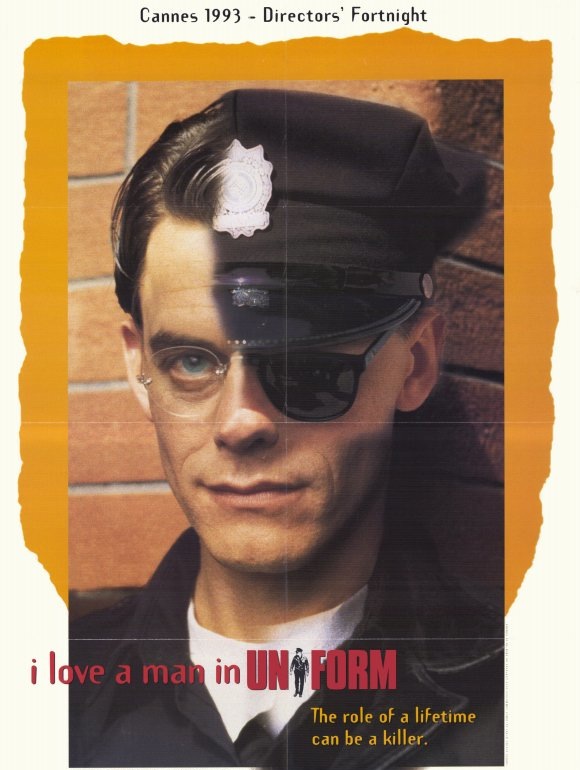 
Seduced by force's dark side


Born on this day (August 13) in 1944, the ever-reliable Kevin Tighe won 1993's Best Supporting Actor Genie Award for playing a corrupt street cop in David Wellington's I Love a Man in Uniform.

Friday, December 17, 1993.
I LOVE A MAN IN UNIFORM (released in the U.S. as A Man in Uniform). Music by Ron Sures and The Tragically Hip. Written and directed by David Wellington. Running time: 89 minutes. Restricted with the B.C. Classifier's warning "some violence, very coarse language and suggestive scenes." HENRY ADLER (TOM McCamus) is attracted to bad girls with style, and good guys with guns.
Or, is it guys with style and girls with guns?
In I Love a Man in Uniform, our hero is more than a little confused.
Never mind. Writer-director David Wellington's low-rent thriller mixes together enough of everything to satisfy both action-adventure fans and neo-conservative cine-art buffs.
As a bonus, actor McCamus's Genie Award-winning performance certifies its authenticity as Can-cultch. As urban single Henry Adler, McCamus plays a 30-ish bank clerk who nurtures a dream of film stardom.
Hours before auditioning for a role in a television cop show, he sees a real policeman gunned down on a downtown street. A practitioner of the Method, Adler "uses" the energy to land the role of Flanagan, a straight-arrow, no-nonsense night-shift cop destined to die heroically in an episode of the Crimewave TV series.
Before doing so, though, Flanagan will "save" Maria, the "whore with a heart of gold" played by actress Charlotte "Charlie" Warner (Brigitte Bako). To get into his character, Adler takes home his leather-jacketed cop costume.
With the cool cynicism of an Abel (Bad Lieutenant) Ferrara, Wellington has produced a competent, commercial feature about an inner-city nut case. Adler, blurring fiction with reality, takes to the streets as Flanagan.
To fulfil himself as the good guy, he needs Charlie to "be" vulnerable Maria, a role the self-reliant, professional woman refuses to play off the set. By staying in character on his own time, Adler suffers one humiliation after another.
Because the Crimewave screenwriters have left him several lines short of a life, he is forced to ad-lib. Identifying with the embattled lawman he portrays, he becomes increasingly isolated, a danger to himself and others.
Among those others is Frank (Kevin Tighe), a cynical, corrupt cop who plays Mephistopheles to Henry's Faust, introducing him to the reality of life on the street during the night shift.
Though filmed in Toronto, I Love a Man in Uniform is no Central Canadian "art" film. A graduate of Concordia University's film program, Wellington has produced a nasty, knowing thriller, a psycho-drama with a decidedly American flavour.
Montreal-style by way of New York, his picture shows us a man seduced by the dark side of the (police) force, idolizing cowboy cops who live by a code — a thin blue line/new centurions/magnum force mentality.
As the U.S. stumbles toward the idea of gun licensing as a first step to urban disarmament, Wellington's gritty vigilante opus is both timely and relevant. His tragedy of Dirty Henry is a competent exploitation item.

Afterword: Though it was his sixth feature film, I Love a Man in Uniform was the first David Wellington picture to play in a Vancouver theatre. I expected to see his name again soon, but the talented writer/director turned his attention to television and I lost track of his work. Then, in June 2010, I tuned into the first episode of the made-in-Toronto television series Rookie Blue. Though I'm usually no fan of TV cop shows, I had enjoyed the made-in-Vancouver sci-fi fantasy shows Reaper (2007-2009) and Flash Gordon (2007-2008). Prominent among Rookie Blue's ensemble cast were Reaper star Missy Peregrym and Flash Gordon himself, Eric Johnson. To my surprise, the director and executive producer of the show was David Wellington. Flash forward to June 2010, and the pilot episode of the made-in-Toronto television series Saving Hope. I'm not a fan of TV hospital shows, either. But Saving Hope had as its star Erica Durance, the actress who so memorably played Lois Lane in the made-in-Vancouver sci-fi fantasy show Smallville (2004-2011). It also featured Stargate SG-1 (1997-2007) star Michael Shanks. Again, the director and executive producer of the show was David Wellington. Although both shows are clearly set in Toronto, each found a broadcast home on a U.S. TV network. Though both shows were created by others, I believe the Wellington touch is an important part of their success. Personally, I wouldn't miss an episode.