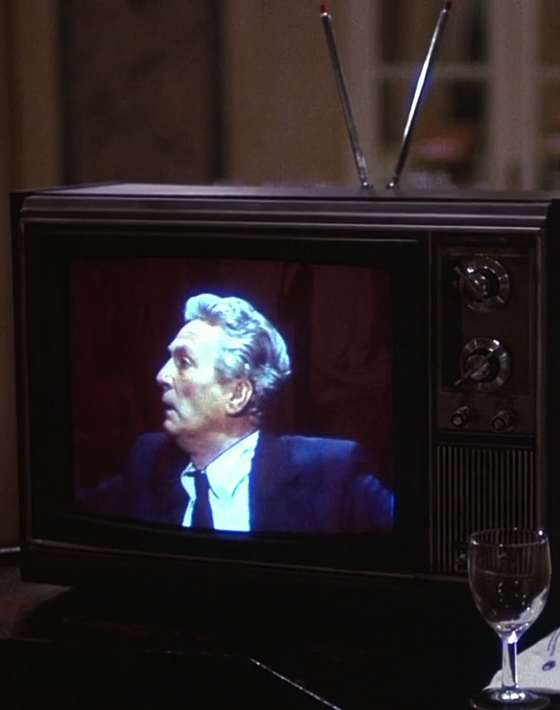 After his public meltdown, news anchor Howard Beale (Peter Finch) embraces his "mad prophet of the airwaves" image and is rewarded with his own 1976 feature Network.


On this day (September 6) in 1952, Canada's first permanent television station went on the air. Acknowledging the magic in the moment for the nation's postwar generation, Montréal's CBFT opened its broadcast day with the 1952 feature film Aladdin and His Lamp. The first link in the publicly-owned Canadian Broadcasting Corporation's TV network, CBFT featured programming in both official languages, French and English. Two days later, CBLT signed on in Toronto, becoming headquarters of CBC's English-language service. Sales of television sets in both cities boomed as a result (although really early adapters in the Toronto area had been watching WBEN, the CBS station in Buffalo, New York, since May, 1948). Dire predictions ensued, with some commentators writing obituaries for radio and theatrical motion pictures. The prescient communications theorist Marshall McLuhan introduced the idea of "hot" and "cool" media, and a 1965 New Yorker cartoon suggested that "when you consider television's awesome power to educate, aren't you glad it doesn't?" Once dismissed as a "boob tube," television learned to broadcast in colour, slimmed down to flat screens, bulked up to big screens and became the essential home appliance. As for its content, the controversy never ends. In 1976, director Sidney Lumet showed us where it was all going in his brilliantly satirical Network.

Tuesday, December 21 1976
NETWORK. Written by Paddy Chayefsky. Music by Elliot Lawrence. Directed by Sidney Lumet.  Running time: 121 minutes. Mature entertainment with the B.C. Classifier's warning: violence and. coarse language throughout. MAX SCHUMACHER (WILLIAM HOLDEN) has no illusions. During more than a generation in the news business, most recently as head of the United Broadcasting System's news division, he has seen it all.
He knows right from the start that his affair with Diana Christensen (Faye Dunaway) is doomed. He knows it and yet, like a moth drawn to a flame, he is fascinated with her.
She has youth, a sterile kind of beauty and an all-consuming ambition. Max knows that, like the black widow's mate, he's the one who'll be consumed.
He still cannot resist the attraction. She is the future. She is television.
She and Max are the creations of Paddy Chayefsky, who, along with men like Abby Mann, Reginald Rose and the late Rod Serling, produced the scripts upon which television's "golden age" of drama was built. As a TV wordsmith, he was one of the best.
It is as a screen satirist, however, that Chayefsky, 53, just may win his immortality. In 1972, he turned his scalpel-sharp wit towards the study of medicine and came up with The Hospital. (Its star, George C. Scott, came out of it with an Oscar nomination.)
This year the playwright looks back with insane laughter on the world of television. The result is Sidney Lumet's film Network, the most devastating!y original, intensely satisfying picture produced this year.
On the surface, it is the saga of Schumacher's friend and co-worker, Howard Beale (Peter Finch), anchorman of the UBS evening news broadcast. Their story is set in the present [1976].
UBS, their broadcasting network, has just been absorbed by a multinational conglomerate whose aptly named hatchet man, Frank Hackett (Robert Duvall) has been comparing expenses with ratings performance. According to Hackett, Schumacher's news division is "a wanton fiscal affront."
Hackett decides that Beale has to go.
And go he does — right over the brink of sanity, right in front of the unblinking eye of the live TV cameras.  He promises to kill himself before his loyal viewers on his last broadcast.
Chayefsky's plot consists of a series of wheels within wheels, all set in motion by Beale's mad declaration. Diana, a UBS programming executive, believes that "the American people want somebody to articulate their rage."
She watches Beale, assesses the reaction and begins to lust after the evening news show.
She also claims to lust after Schumacher. After so many years of marriage, he decides that he needs someone to lust after him, and so accepts her and the inevitable.
Beale, meanwhile, does not kill himself. Instead he becomes "the mad prophet of the airwaves, denouncing the hypocrisies of our times." His cry, "I'm mad as hell and I'm not going to take it any more," is echoed across the nation.
UBS, perennially in fourth place, becomes a contender,
Aside from television (the medium that gave us such bizarre slices of life as The Flying Nun [1967-1970] and My Mother, the Car [1965-1966]), Chayefsky's chief influences seem to be Arthur Hailey and Donald O'Connor,
Hailey, the author of Airport, Hotel and The Moneychangers, may have been the one who turned him on to writing about influential institutions. O'Connor, during a particularly lively dance number in 1952's Singin' In The Rain, counselled one and all to "make 'em laugh!"
We're reminded of the earlier film during the current movie's major confrontation scene, a bitter, telling exchange between ageing idealist Schumacher and new, electronic woman Christensen. A poster advertising that cheerful old musical is visible in the background, a decoration on the bathroom wall, just above the toilet.
Lumet, a former TV director with such theatrical film credits as 1964's The Pawnbroker, Serpico (1973) and Dog Day Afternoon (1975), has shaped Chayefsky's screenplay into a superlative film. His cast, which includes, among others, broadcaster Walter Cronklte's actress daughter Kathy, is uniformly excellent. It is a group that is sure to pick up a bushelful of Oscar nominations in the new year,
And why not? This is the movie about television that Hollywood has always wanted to make. Sharp and savage, Network has a resonance that makes all previous movies on the subject (including Martin Ritt's disappointing The Front, released earlier this year) seem sophomoric by comparison.
In the process Chayefsky emerges as the big screen's ranking satirist, a Swift for the age of McLuhan.
*    *    *
TV OR NOT TV? According to Howard Gottfried, producer of Network, the three U.S. television networks, ABC, NBC and CBS, did not actually refuse to let the moviemakers use their facilities. "We didn't give them the chance," he told Newsday film reporter Joseph Gelmis.
Instead, the cast and crew of the controversial movie packed off to Toronto where the CTV network's flagship station, CFTO, stood in for the fictitious UBS.
Apparently director Sidney Lumet liked working in Canada. Last week he completed principal photography on his second Toronto-based project, a film version of Peter Shaffer's stage play Equus, starring Richard Burton.

Afterword: For reasons that I won't go into here, I dislike the grandly-named Academy of Motion Picture Arts and Sciences and its awards process. Even so, it's a part of the corporate entertainment landscape, and can't be entirely ignored. And, really, it was no stretch to guess that the TV-hating Hollywood of the mid-1970s would offer up "a bushelful of Oscar nominations" to Chayefsky's slickly-crafted jeremiad. There were, in fact, 10 nominations, including best picture, best director (Sidney Lumet) and best actor (William Holden and Peter Finch). Network's four Oscar wins were for actor (Finch), actress (Faye Dunaway) supporting actress (Beatrice Straight) and original screenplay (Chayefsky).
That Hollywood's moguls should hate television is hardly a surprise. Free in-home entertainment threatened the business model that they had built, and the monopoly they enjoyed for some 50 years. Even the most entertaining rants (or format changes such as 3-D and CinemaScope) could not stop the inevitable, though. Today, as the Internet brings about its own inevitable changes, Hollywood's studios and the original TV networks are all wholly-owned subsidiaries of bigger, nastier corporate entities. Looking back, Network screenwriter Chayefsky's UBS seems to have been the template for international media mogul Rupert Murdoch's U.S.-based Fox News. In recent years, we've seen "mad prophet" Howard Beale's insanity channeled by such demented creatures as Glenn Beck, Rush Limbaugh and Bill O'Reilly. In Canada, by contrast, a four-year-long attempt to establish an audience for the reactionary Sun News Network ended in failure when its free-market message-mongering was unable to attract enough viewers to turn a profit for its investors. I'd call that a happy ending.