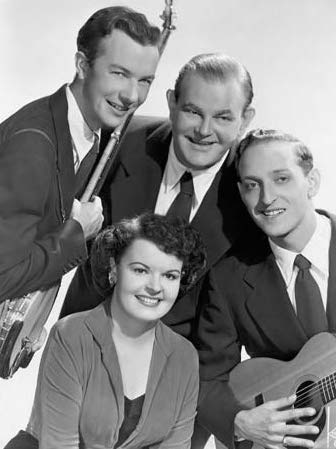 
Together again for a reunion concert


On this day (January 2) in 1962, NBC-TV banned a popular folk-singing quartet from The Tonight Show when the musicians refused to sign a political loyalty oath. Blacklists are remembered in James B. Brown’s 1982 documentary The Weavers: Wasn’t That a Time!.

Friday, November 26,  1982.
THE WEAVERS: WASN’T THAT A TIME! Concert documentary conceived and directed by James B. Brown. Narration written and spoken by Lee Hays. Running time: 78 minutes. General entertainment. FAME CAME QUICKLY. More than 30 years ago, a New York folk quartet called The Weavers made their recording debut singing Huddie Ledbetter’s ballad “Goodnight Irene.”
It was, in the words of their then-manager Harold Leventhal, “an instant  hit.” The top-selling record of 1950, it made overnight stars out of Pete Seeger, Lee Hays, Ronnie Gilbert and Fred Hellerman.
The curtain fell almost as quickly. In 1952, a time remembered as the McCarthy era in the United States, the socially progressive Weavers refused to sign the standard loyalty oaths.
The right-wing extremists called them communists, and their names were added to the infamous blacklist. Suddenly, no one wanted to book them for concert or television appearances.
Looking back, bass player Lee Hays comments that "people who were blacklisted get all sorts of honour these days. If it weren’t for the honour, I’d just as soon not have been blacklisted.”
For three years, the group remained inactive. Then, in December 1955, they gathered in Carnegie Hall for a reunion concert. Despite the blacklist, the appearance was an instant sellout.
Looking back, television newsman Harry Reasoner says that The Weavers “were the unifying factor between the rebellious America of the 1930s and 1940s and the rebellious America of the 1960s.”
Arlo Guthrie, who was in that reunion concert audience, acknowledges a direct debt to the quartet, as do Judy Collins, Holly Near and Mary Travers. “Peter, Paul and Mary were very much The Weavers' children,” Travers says.
Although the group disbanded in 1963, their "children” — The Kingston Trio, The Chad Mitchell Trio and The Limeliters among them — carried on the folk tradition in American music.
Three years ago [1979], Hays, by then a legless diabetic confined to a wheelchair, invited his old singing partners to a picnic on his rural property. He also asked his neighbour, PBS television documentarist Jim Brown, to make a little movie of the get-together.
There was magic in the air. Or, as Hays puts it: “That day was so full of euphoria that I had to take a laxative that night.”
It was also the beginning of Wasn't That a Time!, a feature documentary that is both a tribute to and a record of the group’s special musical chemistry. It was evident at the picnic, and prompted Seeger to suggest one last public appearance, a final concert at Carnegie Hall.
Brown, the filmmaker, together with co-producers Leventhal and former National Film Board executive George Stoney, decided that this would be the perfect vehicle to tell the story of The Weavers. The picture begins with the singers gathered for a new group photo.
We see and hear Hays, the film’s narrator, tell the story of his picnic. After Seeger suggests the Carnegie Hall concert, the filmmakers offer some historical perspective on the group.
There is, for example, kinescope footage of the quartet performing “Tzena, Tzena” on TV. “Will you look at that," chuckles Hays. “Barbie Doll and three stuffed dummies.”
“I swear on Pete’s chin whiskers, if we’d known how witless we looked, we’d have turned to something more socially useful. Like chicken plucking.”
An amazing thing, the aging process. In a performer like Frank Sinatra, we notice the thinning hair, the thickening waist and, when he attempts to sing, we notice that the voice has wasted away.
The Weavers gave that last concert in Carnegie Hall in November 1980. Close your eyes and listen to the voices. It could be 1963, or even 1955.
Maybe there is something to clean living and right thinking. From his wheelchair, Hays offers the thought that "the future ain’t what it used to be.
"And what’s more, it never was.”
A record of what was and, thanks to recording technology, what remains with us, Wasn’t that a Time! is a vital, vibrant film for right now.

Afterword: Somewhere in the basement, I have a copy of the Decca Records 78 rpm recording of The Weavers singing “Goodnight, Irene.” It belonged to my father, and it is among my earliest musical memories. Wasn’t that a Time! put some fine historical (and political) perspective on a world I had known as a kid. Because television didn’t arrive in our home until the mid-1950s, the record player was my main source of home entertainment. Looking back, I realize that my parents had eclectic tastes, and I benefited from a collection that included folk, country and western, show tunes, swing band, spoken word (mainly comedy) and classical recordings. My musical world got larger with the arrival of stereophonic sound LPs in 1958. At the same time, rock 'n' roll had begun its campaign of conquest, a march to popular-music dominance only challenged in the 1990s by the rise of rap. Though much has changed since The Weavers refused to disavow their progressive politics in exchange for a Tonight Show appearance, much has not. Indeed, in 2018 protest seems more necessary than ever. The story told in Wasn’t that a Time! remains relevant.