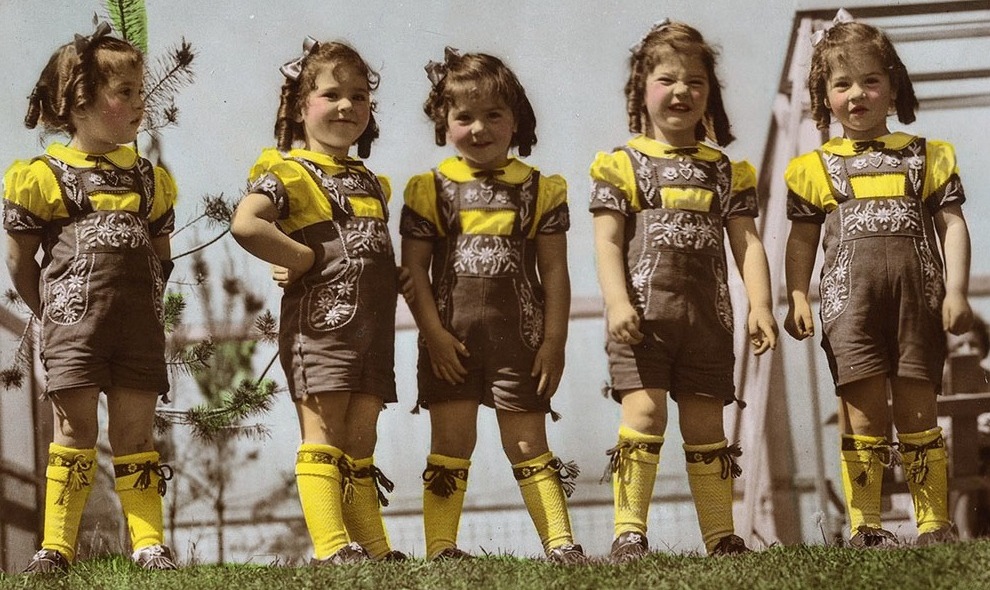 Among the guests at the Dionne Quintuplets' fifth birthday celebration was a documentary film crew.


Born on this day (May 28) in 1934, the Dionne Quintuplets were at the centre of a 20th-century pop mania. Test your knowledge of the sisters' moment in the Hollywood spotlight with a Reeling Back Canadian Institutions quiz focused on Motherhood.

ON MAY 28, 1934, ELZIRE Dionne of Callander, Ontario, won herself a permanent place in the Guinness Book of Records by giving birth to the world's first set of quintuplets to survive infancy. Placed under the care of Dr. Allan Roy Dafoe, the Quints soon earned a place in Hollywood history by starring in a series of films. From the brief descriptions given below, name those movies.

1.     A fictionalized account of the Quint's birth, this is the movie that changed the family name to Wyatt and moved their home from Northern Ontario to just outside Montreal, Quebec.

The Quints' befuddled father, Asa Wyatt, was played by a Vancouver-born actor. Name him.

2.    In this feature film, the Quints are among a group of some 3,000 persons who organize a tribute celebration to honour the kindly old doctor who brought them all into the world.

3.    In another movie, a girl reporter, part of the news crew sent to cover the story of the Quints' birth, falls in love with one of the male reporters, a correspondent for a rival paper.

4.    Featured prominently in each of the above films was the loveable family physician who delivered the Quints. The screenwriters named him Dr. Roy Luke. Name the actor who always played the role.

5.    Author and social commentator Alexander Woollcott provided the commentary for this documentary, a record of the Quints' fifth birthday celebration, which was nominated for an Academy Award in the best short subject category.

6.     Eventually, audience enthusiasm for the Quints fell off. Kindly country doctors remained a draw, though, and the movies' Dr. Luke character inspired a spin-off radio series (1937-1954), that became a six-picture movie series (1939-1941) before being recycled, yet again, as a TV series (1956-1957). Name the famous fictional physician with the generation-long multi-media career.

The above is a restored version of Quiz 72, one of 78 included in The Canadian Movie Quiz Book by Michael Walsh originally published in 1979. For additional information on this archived material, please visit my FAQ.

Afterword: Although they were the subject of a 1977 biography by social historian Pierre Berton (The Dionne Years: A Thirties Melodrama), the Quints remained out of the public eye for nealy 50 years. In 1986, authors John Nihmey and Stuart Foxman collaborated on Time of Their Lives: The Dionne Tragedy, a novel that focused on the Ontario government's scandalous exploitation of the children and the marginalization of their parents. A best-seller, the book was adapted into the 1994 TV mini-series, Million Dollar Babies, a U.S.-Canada co-production that starred Beau Bridges as Dr. Roy Dafoe and Kate Nelligan as Helen Reid, a radio reporter who becomes an advocate for the girls and their parents.