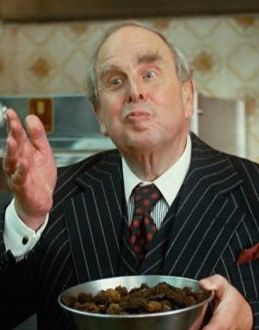 Maximillian Vanderveer (Robert Morley) finds a dish to his taste in director Ted Kotcheff’s 1978 black comedy Who Is Killing the Great Chefs of Europe?.


Hilarious, hideous murder on the menu


Considered gloriously eccentric by his contemporaries, Robert Morley had a special talent for stealing scenes. Born on this day (May 26) in 1908, the portly performer once hijacked an entire movie, director Ted Kotcheff’s 1978 satirical comedy Who Is Killing the Great Chefs of Europe?

WHO IS KILLING THE GREAT CHEFS OF EUROPE? Written by Peter Stone. Based on the 1976 novel Someone Is Killing the Great Chefs of Europe by Nan Lyons and Ivan Lyons. Music by Henry Mancini. Directed by Ted Kotcheff.  Running time: 112 minutes. Mature entertainment. ROBERT MORLEY SHOULD BE declared a national treasure. Expatriate Canadian director Ted Kotcheff should be knighted for giving the portly British actor a showcase role to celebrate his 40th year in feature films.
(For the record: Morley made his screen debut in 1938, appearing opposite Montreal-born actress Norma Shearer. He played Louis XVI to her Marie Antoinette, and earned a supporting actor Academy Award nomination in the process.)
Morley is magnificent. He is the pâte à choux that makes Kotcheff's deft new comedy Who Is Killing the Great Chefs of Europe? a gourmet confection, one that finds black humour in the search for a murderer stalking celebrity cooks and dispatching each one in the style of the chef’s best-known dish.
Morley is Maximillian Vanderveer, the “calamitously fat” publisher of Epicurious Magazine. He's a man whose taste buds can make or break a chef's career. Imperious and incorruptible, he dispenses star ratings and bons mots with vice-regal aplomb.
“Take one star away,'' he says of an out-of-favour restaurant. “I dined there last night, and generated more gas than the Middle East in a year.''
Morley is impeccable, his delivery utterly delicious. Whether offering up a soliloquy on the joys of obesity, or trading quips with less well-born mortals, he is in complete control. A fat man who is funny without being foolish, he is an actor unfailingly fascinating to watch.
Although he is billed beneath his co-stars, George Segal and Jacqueline Bisset, the picture is Morley’s triumph. Indeed, both Segal and Bisset are woefully miscast.
A beautiful lady with minimal talent for comedy, Bisset plays Natasha O'Brien, one of the great chefs of the title. She specializes in desserts and her after-dinner treats are, according to Max, the best in the world. Bisset, the actress, is not nearly as sweet, offering bitchiness in place of wit.
Segal is Robbie Ross, Natasha's estranged husband, a dynamic franchise-food entrepreneur and a born con man. ''How is that company of yours, American Fake Foods?” Max asks pointedly when “Taco King” Robbie turns up in London in pursuit of a deal and his ex-wife.
“American Fast Foods,” Robbie says, correcting him.
''And how many smiling children have you poisoned this week?'' Max  parries, eyebrows slightly arched.
Out of place in a role that would have been perfect for William Shatner, Segal is   nonetheless saved by the Morley magic. The movie’s menu includes stops in London, Paris and Venice, for a succession of mouth-watering meals and some hilariously hideous murders.
Like his friend and former CBC co-worker Norman Jewison, Kotcheff  has a keen eye for comedy. Working from Peter Stone's quick-witted script, he makes Who Is Killing the Great Chefs of Europe? an elegant satirical delight.

Afterword: I wasn’t the only reviewer enchanted by Robert Morley’s performance. Members of both the Los Angeles Film Critics Association and the New York-based National Society of Film Critics awarded him their 1978 best supporting actor trophies. More self-deprecating than the larger-than-life characters he played, Morley was largely indifferent to performing honours. “If the critics were always right, we should be in deep trouble,” he famously said. In 1957, he was made a Commander of the Order of the British Empire (OBE) by his Queen for his service to drama. Eighteen years later, though, he quietly turned down a knighthood.
Not mentioned in the above review was the fact that Morley had road-tested his Max Vanderveer character in 1973, when he appeared opposite Vincent Price in director Douglas Hickox’s serial killer comedy Theatre of Blood. In it, Price played a thin-skinned London actor named Edward Lionheart who sets out to murder all the critics that have humiliated him, dispatching each in an appropriately Shakespearean manner. Morley played Lionheart’s eighth victim, Meredith Merridew, a gourmand who chokes to death in a scene that parodies the fate of Queen Tamara in Titus Andronicus.