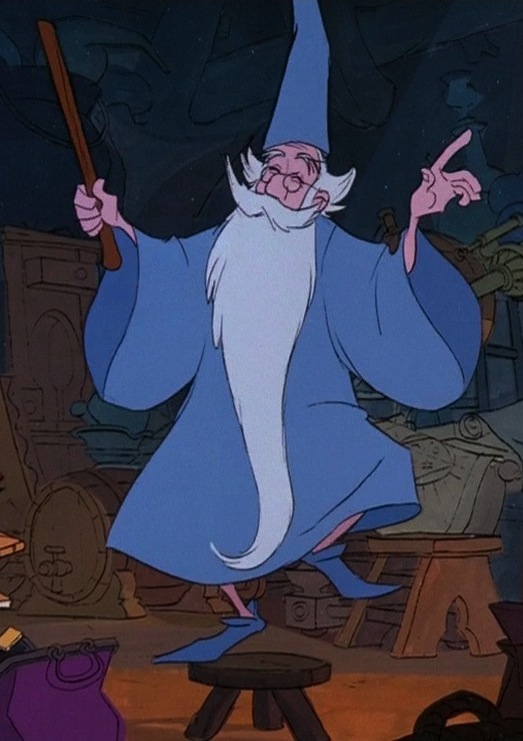 Merlin (voice of Karl Swenson) sings out a spell in Disney's 1963 animated adaptation of The Sword in the Stone.

Sliced to fit the formula


Although never more than a supporting player in live-action features, Karl Swenson had a 20-year career in radio. Born on this day (July 23) in 1908, Swenson's vocal versatility earned him star billing as Merlin in Disney's animated adaptation of The Sword in the Stone.

Thursday, March 22, 1973.
THE SWORD IN THE STONE. Written by Bill Peet. Based on the 1938 novel by T.H White. Music by George Bruns. Songs by Robert B. and Richard M. Sherman. Directed by Wolfgang Reitherman. Running time: 79 minutes. General entertainment. BEFORE HIS DEATH IN December of 1966, Walt Disney had the satisfaction of looking back on a lifetime of dreams fulfilled. His Disneyland, originally thought to be his greatest folly, had turned into a money mine, his television show had become an institution and drawings were already on the boards for a Disney World.
Financially, the Disney empire had never been in better shape.
Artistically, though, things were little better than a shambles. If Disney  thought about it at all, it must have been with despair. Despite all of his other successes, he had failed to maintain the creative vitality of the art form he himself had created, the feature-length animated cartoon.
His most ambitious cartoon project, 1959's Sleeping Beauty, had been a box-office bomb. The red stain that it left on the corporate books seems to have soured the studio on animation, and the quality of the product began to drop off.
It hit rock bottom in 1963 with the original release of The Sword in the Stone.
By all logic, the latter project should have been Disney's best, not his worst cartoon feature. It was, after all, inspired by one of the most intrinsically magical tales in English literature, the legend of King Arthur.
It was based on one of the best children's book ever written, T.H. White's unfailingly delightful The Sword in the Stone, first published in 1938.
White, who died in 1964, approached the legend with style and a sense of whimsy. Almost everything that we know of Arthur, of Guinevere his queen, of Merlin the magician, of Lancelot, of Camelot and the Knights of the Round Table, comes from the classic tales of Sir Thomas Malory, the Morte d'Arthur, and Alfred Lord Tennyson's Idylls of the King.
Naturally, they chronicled the high points, telling tales of high romance and tragedy during Arthur's glorious reign.
White, in his work, attempted to fill in the gaps. In The Sword in the Stone, he deals with the pre-royal Arthur's magical education; The Ill-Made Knight is Lancelot's story; The Queen of Air and Darkness introduces the Orkneys, the villains of the piece; and The Candle in the Wind deals with the destruction of Camelot.
Collectively they are found under the title The Once and Future King.
The collection is more than just a fairy tale, and more than just a children's book. As an author and observer, White ranks with Mark Twain; as an adult fantasist, he stands head and shoulders above the currently fashionable J.R.R. Tolkien, lacking Tolkien's turgidity, but none of his imagination.
The screen adaptation, scripted by Bill Peet, is an act of literary vandalism unparalleled in the history of even such a Hunnish enterprise as Disney. Peet, who is additionally credited with "character design," has managed to alter the basic story outline, mutilate the purpose and personality of the characters and replace the genuine magic of White's original with a collection of cheap and unimaginative tricks, most of which look like rejects from earlier, more painstaking projects.
For some reason, Peet felt obliged to make the project conform to what had come to be the Disney success formula. Traditionally Arthur, trueborn king of England, was in danger as an infant. To protect him, the wizard Merlin took him to the castle of Sir Ector.
There, under the tutelage of the magician, and with his identity a secret even to himself, he grew up as a son to Ector and brother to Ector's natural son, Kay.
In Disney's hands, Arthur's story is Cinderella all over again. Merlin (voice of Karl Swenson) is turned into a fumbling Fairy Godfather, and Kay (Norman Alden) becomes a loutish, ugly stepbrother to a gormless Arthur (Rickie Sorensen).
His sudio's film makes a whole series of changes, none of which were necessary in light of White's original creation.
In the book, Merlin seeks to educate Arthur, called "Wart," in the ways of nature by transforming him into a series of animals, among them a perch, an ant, a goose, a falcon, an owl and a badger. The film retains (more or less) his adventures as a fish, but capriciously substitutes episodes as a squirrel and a sparrow.
In the book, Arthur encounters the evil enchantress, Morgan le Fay. The film eliminates le Fay, but creates a totally new character, Mad Madam Mim (Martha Wentworth), who proceeds to have a magician's duel with Merlin.
That same year (1963), Vincent Price and Boris Karloff played a pair of whimsical wizards who squared off for a duel in Roger Corman's The Raven. Despite all the advantages available to the Disney animators, Corman's live-action actors did it better.
The Sword in the Stone represents Disney's bleakest hour. It fails, dismally and utterly, because it attempts to fit a work of individual genius into a formula, rather than striving to reflect that genius in a unique work of art.
It might as well have been made by Hanna-Barbera.

Afterword: A life-long character actor, Karl Swenson segued from the golden age of radio to the golden age of television. At the age of 47, he played Humpty Dumpty in the pioneering made-for-TV movie Alice in Wonderland (1955). The 90-minute Hallmark Hall of Fame special was a foreshadowing of his later association with Disney productions that included The Sword in the Stone and the studio's Wonderful World of Color TV series. Swenson was most familiar to Western fans, who saw him play countless guest roles on virtually every broadcast oater of the day, a list that includes Gunsmoke, Maverick, Have Gun - Will Travel, Wagon Train, Bonanza and The Virginian. Toward the end of his life, he had a recurring role on The Little House on the Prairie, playing lumber mill owner Lars Hanson. By sad coincidence, Swenson's death occurred in October 1978, shortly after he filmed the episode in which the elderly Hanson character dies. He was 70.