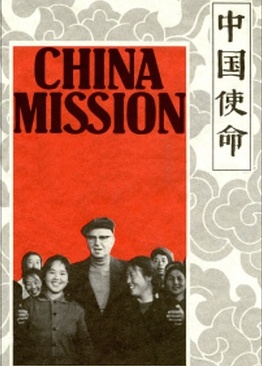 Chester Ronning is pictured during a visit to the land of his birth on a poster for director Tom Radford’s 1980 documentary, China Mission.


Film a disservice to a great Canadian


This morning (December 13) in Beijing, officials confirmed the detention of two Canadians, an apparent response to the arrest of Chinese business executive Meng Wanzhou in Vancouver. Needed now is the wisdom of a Chester Ronning, subject of Tom Radford’s 1980 documentary China Mission.

CHINA MISSION.  Co-written by Stanley Jackson. Music by Roger Deegan. Co-written and directed by Tom Radford. Running time: 57 minutes. OCCASIONALLY WE ARE REMINDED that the National Film Board, like the CBC, is a creature of government. Though its creative skills are second to none — NFB films have won Oscars three years in a row, now [1980] — the federal filmmaking agency must,  from time to time, consider the source of its funding.
Take, for example, Tom Radford’s documentary feature China Mission. The film is a 57-minute look at the adventure-filled life and times of Canadian diplomat Chester Ronning.
The son of Lutheran missionaries, Ronning was born in 1894 in what was then Imperial China. Because his parents believed in living among the people they served, Ronning's first language was Chinese.
Forced to flee the country during the Boxer Rebellion, the Ronning children learned Norwegian before getting around to English. After a second tour of duty in China, the family homesteaded in rural Alberta, where Ronning’s father led the settlers who founded the town of Valhalla.
As a young man, Ronning returned to China to run the school established by his parents. Something of a hotbed for revolutionaries, it was ruthlessly suppressed when Chiang Kai-shek's U.S.-backed nationalists took control of the government.
No shrinking violet, Ronning was a depression-era member of Alberta's Legislative Assembly (MLA), representing the United Farmers Party. He later served as the provincial leader of the Canadian Commonwealth Federation (CCF).
Radford’s film begins with a Ronning family reunion. Chester, who is now 86 [in 1980] and a resident of Camrose, Alberta, is seen chatting in Chinese with his surviving brothers and sisters.
The filmmaker’s approach is traditional NFB. The story is supposed to emerge through the personality of its central character. Unfortunately, Radford seems genuinely reluctant to give us the real goods.
During the Second World War, Ronning was assigned to the staff of the Canadian embassy in China. He advised Ottawa in no uncertain terms that Chiang was a tyrant and a crook, and that the man to deal with was Mao Tse-tung.
In 1949, Ronning became Canada’s first ambassador to post-revolutionary Peking [now Beijing]. During the Korean War, Canada broke relations with the Mainland regime.
Ronning went on to serve as our ambassador to Norway, and then High Commissioner to India. He never stopped nagging [Canada’s prime minister] Lester Pearson about China, though.
Radford whistles through Ronning’s 30-year diplomatic career as if it were some sort of embarrassing eccentricity, a point to be dealt with but not dwelt upon. More screen time is devoted to archival footage of Chinese cormorant fishing than to Ronning’s daring (if ill-fated) 1965 peace mission to Hanoi during the Vietnam war.
Historically, he was a voice of reason and, more often than not, of conscience at a time when Canada was allowing more and more of its foreign policy decisions to be taken in Washington. For his trouble Ronning became, not a hero, but an exile.
Presumably the old campaigner has some thoughts on the conduct of our international relations during that turbulent and significant period. If so, they aren't included in China Mission.
Radford's camera shows us the elder statesman cooking himself a Chinese meal. We see him teaching elementary school children to count to ten in Chinese, and commenting on brush stroke techniques in Chinese art. Never once does an opinion on either Chinese or Canadian politics pass his lips.
Chester Ronning was a contemporary of Norman Bethune, and like him is a man whose name is more honoured in China than in Canada. China Mission, by attempting to portray him as a Far Eastern Mr. Chips,  does him a grave disservice.
China Mission will be premiered in Vancouver as part of the NPB’s China Window series. It is being shown Thursday [November 27, 1980] evening at the Centennial Museum Auditorium. Admission is free.

Afterword: And suddenly, Canada is in the middle of Donald Trump’s Sino-American trade war. It’s been a breaking news story since December 1, the day that the RCMP arrested Huawei Technologies CFO Meng Wanzhou at the Vancouver International Airport. The federal police force was acting on a U.S. warrant that seeks the extradition of the 46-year-old Chinese business executive for unspecified charges involving alleged violations of U.S. sanctions on Iran. (Because Meng ranks among the world’s super-rich, the standard black-hood-rendition-to-Guantanamo procedure was not an option for our American friends). Tuesday (December 11), she was granted bail under conditions that included her remaining in Vancouver — a former Canadian resident, she owns two luxury homes in our city — while awaiting a formal extradition hearing.
In what appears to be a response to Meng’s arrest, two Canadians now are being detained in the Peoples Republic. Deemed “threats to national security,” Michael Kovrig and Michael Spavor were taken into custody on Monday (December 10). Were he still alive — Chester Ronning died in 1984 at the age of 90 — the subject of director Tom Radford’s documentary would certainly have something quotable to say. Historians have noted his influence on Prime Minister Pierre Elliot Trudeau’s decision to take the lead among Western nations and recognize the Beijing government in October, 1970. In his later years, as noted in the above review, veteran diplomat Ronning was not comfortable with Canada allowing Washington to exercise ever greater influence on this country’s foreign policy. Today, we can only hope that Prime Minister Justin Trudeau will take the lessons of history into account as he navigates this ongoing crisis.