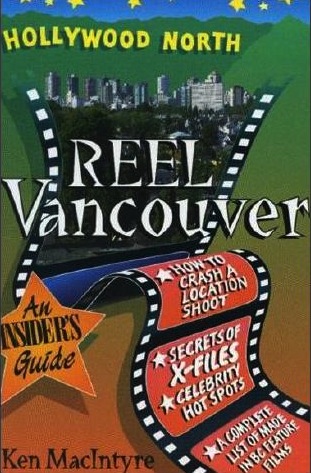 
The special six-episode "Season 10" of The X-Files ended last night (February 22), and the ratings are generating buzz about more to come. Its success will come as no surprise to Ken MacIntyre, whose 1996 book Reel Vancouver offered fans a "Secrets of X-Files" section.

Sunday, December 15, 1996.
REEL VANCOUVER: AN INSIDER'S GUIDE. By Ken MacIntyre. Whitecap Books, 1996. 186 pp. Illus. $16.95. HOORAY FOR HOLLYWEIRD.
Long before The X-Files creator Chris Carter discovered the dark joys of shooting in Vancouver, such accomplished shockmeisters as Robert Altman, William Castle, Bert I. Gordon, Dennis Hopper, John Carpenter and Michael Crichton were calling "action" in our immediate vicinity.
As the sun sets on the American empire, filmmakers are reflecting the decline with increasingly moody psychodramas, horror tales and sci-fi thrillers. The search for the perfect place to realize these skewed visions has often brought them to what Carter calls "Hollywood's biggest backlot."
Hooray for Ken Maclntyre.
Balancing civic boosterism with a fan's obsession, he has produced Reel Vancouver: An Insider's Guide (Whitecap Books; $16.95), a handbook to the when and where of local movie-making.
A native Vancouverite, MacIntyre has seen the B.C. film industry grow from Hollywood wannabe to North America's third-largest production centre. Having toiled as a movie publicist, he seized the chance to combine his fascination with film ephemera with an insider's knowledge.
At first glance, his book appears self-limiting. Organized for those interested in what was shot where, its chatty historic notes on more than 60 Lower Mainland sites — from the "film friendly" Mountain View Cemetery to a "haunted" Riverview Hospital — speak most directly to film tourists.
Nor do its chapters on finding current working locations, on after-hours star-spotting or even its eye-opening 336-title list of features shot in B.C. between 1910 and 1996 appear to be mass-market selling points.
Then it takes aim at the X-philes. Launching Reel Vancouver past regional-interest curiosity into the realm of pop-culture necessity is its unique 40-page X-Files episode guide. This is the book that identifies local shooting locations for each of the series' first, second and third season shows.
Hooray for X-oterica.

The above is a restored version of a Province review by Michael Walsh originally published in 1996. For additional information on this archived material, please visit my FAQ.

Afterword: Ken Maclntyre had no doubt that the Vancouver production boom of the late 1980s was deep-rooted. He'd studied film at the University of B.C., and afterwards worked as a freelance film journalist and as a production assistant on Global Television's teen drama series Madison. Shortly after the publication of Reel Vancouver, he joined the Vancouver-based public relations firm C&C Communications, where he is currently the director of publicity and promotions.
Three weeks ago (February 1), he launched Modtraveler, an attractive new website designed as "an enthusiast's guide to Modernism in Palm Springs, Las Vegas, Honolulu and Vancouver." Its content celebrates MacIntyre's informed enthusiasm for mid-20th-century modern architecture, the popular culture of the period and travel to his favourite Pacific Rim cities.