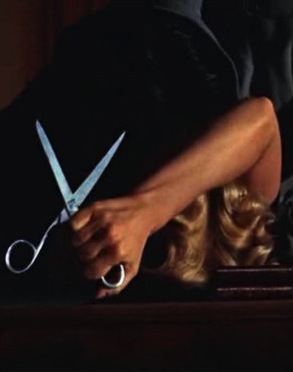 In one of its few stereoscopic shock effects, Margot Wendice (Grace Kelly) reaches back into the audience for a weapon to use against her assailant in director Alfred Hitchcock's 1954 thriller, Dial M for Murder.


Hitchcock thrills in all three dimensions


The ads promised "A LION in your lap! A LOVER in your arms!" Bwana Devil, the first feature film shot in colour that used the two-projector Polaroid 3D system, premiered on this day (February 18) in 1953 in New York at the Loew's State Theater. An independent feature made in Africa, its popular success attracted the attention of Hollywood studios desperate for some new thing to use in their fight with the newest media sensation, television — and an entertainment craze was born. Before the market for 3D crashed in 1955, some 65 features (and countless pairs of cardboard glasses) passed through North American cinemas. A second boomlet occurred in the early 1980s, following the development of a single-projector 3D process. Though this resurgence ended in 1986, 3D would continue as an attraction in the giant-screen specialty venues operated by the Canadian-based IMAX Corporation. The emergence of digital technology in 2002 set the stage for 3D's third coming. When 2009's Avatar became the top-grossing film of all time, a new generation of panic-stricken studio executives decided that 3D was the answer to their 21st-century problems. Or not. The new boom peaked with 47 3D features released in 2011, dropping to 41 in 2012, 35 in 2013 and 24 in 2014. While waiting for the next chapter in the current tech tale, Reeling Back recalls one of the few great 3D productions from the past, Alfred Hitchcock's Dial M for Murder (1954).

Wednesday, September 1, 1982.
DIAL M FOR MURDER. Written by Frederick Knott. Music by Dimitri Tiomkin. Produced and directed by Alfred Hitchcock. Running timetime: 105 minutes. General entertainment. HOLLYWOOD FIRST TOOK AN interest in stereoscopic films because they were commercial. The first big 3D success might have been called Bwana Devil, but the scenario was strictly "Dial M for Money."
Released 30 years ago [1952] this November, producer-director Arch Oboler's jungle epic returned rentals of $2.7 million on a $300,000 investment. The next year, 1953, more than 60 3D features were produced, as the major studios attempted to convince filmgoers
that depth-vision was the next logical motion picture revolution.
By 1955, the revolution was all but forgotten. Widening the screen (via the CinemaScope process) was less bother than deepening it. More important, the audience was tired of being poked in the eye.
The big studios gave up on 3D when it ceased to be a big box-office draw — when, according to film historian Michael Kerbel, it "became a burden to produce and sell." Never mind that the studios themselves had turned off the audience by producing few quality pictures in the process.
Today [1982] there is new interest in 3D among studio executives. Unfortunately for film fans, it is for the same old reason. Independent movie-makers have managed to make impressive profits with stereoscopic exploitation pictures.
Since 1970, The Stewardesses, a sex comedy released in both X- and R-rated versions, has earned more than $7 million on a $100,000 investment. Andy Warhol's Frankenstein (1974), made for $300,000, has returned $5 million.
Last year [1981], a $3.5-million spaghetti western called Comin' at Ya! sold $12-million worth of tickets. None of the above films were handled by major distributors.
When a major puts its muscle behind a promotion, watch out. Last month, Paramount Pictures released Friday the 13th Part III in 3D. During its first 13 days in release the $1.5-million slash-and-stab opus earned $21.5 million.
"What would happen," asks 20th Century-Fox advertising vice-president Irving Ivers, "if they really made a terrific movie in 3D instead of just an exploitation film?"
Ahem! I've got news for you, Irving. They have made a terrific movie in 3D. Twenty-eight years ago, Warner Brothers put together a package that included top stars in a hit play under the direction of a master filmmaker.
Alfred Hitchcock's Dial M for Murder, based on Frederick Knott's 1952 Broadway thriller, starred Ray Milland, Grace Kelly, Robert Cummings and character actor John Williams. It was released in May, 1954, but because the the 3D boom had gone bust, it was released in the conventional flat-screen format.
"A 3D Dial M has long been one of those rarities that film enthusiasts have despaired of ever seeing," Kerbel lamented in the November-December 1980 issue of Film Comment magazine. The work of a top production team, its appearance now is a genuine screen event.
It opens Friday at Main Street's independent Savoy Cinema, Vancouver's most enthusiastic 3D booster. Filmgoers who are not enthusiasts are likely to have three basic questions.
Is 1954 3D as good as the 1982 3D of Friday the 13th Part III?
Yes. By 1954, 3D's big problems were in the projection booth, not the studio. The major technical advances since then have been in presentation, and given that Savoy Cinema projectionist David George is one of the most conscientious local boothmen, the screen image is sure to be state-of-the-art.
What about those damn cardboard glasses?
True, the glasses supplied with Friday the 13th had flimsy, hard-to-adjust cardboard frames. Dial M patrons, on the other hand, get more comfortable, plastic-framed polaroids that fit like sunglasses.
All right, but is the picture any good?
Please. We're talking about Alfred Hitchcock, not some slasher film hack. The master of suspense used 3D to draw us into the story, rather than to assault our eyeballs.
A solidly plotted thriller in the Sleuth (or, more recently, Deathtrap) tradition, Dial M is a puzzle picture full of wit, style and fine acting.
Set in London, it stars Milland as Tony Wendice, a retired tennis pro who discovers that his wife Margot (Kelly) is having an affair with American mystery writer Mark Halliday (Cummings).
The self-assured Tony plots his wife's murder, certain that he can commit the perfect crime. The ever-surprising Hitchcock takes the opportunity to turn the cinema into a theatre, placing the action within the proscenium arch as if it were a live stage play. Here,
the 3D technology draws viewers into the picture and its story.
The effect is one of claustrophobia, and adds to our sympathy for the distressed Margot.
This is the kind of movie that might have saved 3D, had it been made a year earlier. It's the kind of picture that they had better start making again if they expect 3D to survive its second coming.

Afterword: Yes, there is a Canadian component to the 3D story. In 1986, National Film Board of Canada writer-director Colin Low produced the first full-colour IMAX 3D film, the 20-minute Transitions. It played in the Canadian Pavilion during Vancouver's Expo 86 world's fair, and was the beginning of the IMAX Corporation's continuing involvement with 3D presentation in its worldwide network of specialty theatres. Then there is the fact that director James Cameron, the single most influential figure in the 21st-century resurgence of 3D, is a Canadian. His documentary about a visit to the wreck of the RMS Titanic,  2003's Ghosts of the Abyss, was the first IMAX 3D feature. His 2009 science-fiction epic Avatar, with reported box-office receipts of $2.8 billion to date, remains the top-grossing film of all time. It is the film everyone acknowledges as the source of Hollywood's recent enthusiasm for the process.
See also: In 2011, Sony created a timeline graphic showing "Every 3D Movie Ever Made." Or, at least, until the end of 2011.