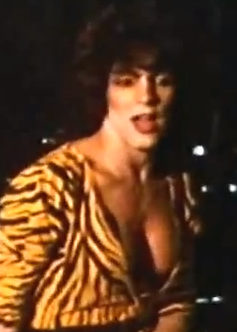 Mark, who identifies as Michelle, discusses her life on the street with documentarians Janis Cole and Holly Dale in their 1984 feature Hookers On Davie.
Appearing as themselves:
Tiggy
Ricky
Joey
Mark / Michelle
Spier
Curtis / Tiffany
Bev
Jackie


On this day (June 13) in 2013, the Supreme Court heard arguments in Canada (AG) v Bedford, a case that challenged federal prostitution laws. It was a landmark moment in a decades-long debate prompted by such films as the Janis Cole/Holly Dale documentary Hookers On Davie.

HOOKERS ON DAVIE. Music by The Crusaders. Produced and directed by Janis Cole and Holly Dale. Running time:  86 minutes. Rated 14 Years entertainment with the B.C. Classifier’s warming: Not suitable for those under 14. Frequent very coarse language and suggestive language. WORDS FAIL ME.
For want of a better term, people are calling Hookers On Davie a documentary.
It’s certainly not an entertainment feature. Filmmakers Janis Cole and Holly Dale offer it as a representation of reality in Vancouver, a city identified on screen as “the prostitution capital of Canada.”
We are shown allegedly candid scenes shot on the street and in various licensed lounges intercut with staged interviews with persons who identify themselves as prostitutes. It is not presented as fiction.
On the other hand, it’s not what I would call a documentary. John Grierson, who more or less invented documentary as a respected film form, defined such films as “the creative treatment of actuality.”
There is nothing creative about the picture on offer from Cole and Dale. Setting a camera down in front of a sad-eyed drug addict and listening while she rambles on about her plight is the sort of cheap shot filler we expect from TV news, not motion picture documentaries.
What Cole and Dale do is go back to a time before Grierson to adopt an intellectually less demanding cinematic style. The operative word here is documentaire, a term once used by the French to describe travel films.
Funding for their Hookers project came from Ottawa (via the Canada Council), Montreal (the National Film Board’s Studio D) and Toronto (the Ontario Arts Council), cities where, we must assume, prostitution is virtually unknown.
Like those daring, if somewhat credulous, camerapersons of yore, the intrepid Torontonians crossed the country to record the Vancouver West End’s quaint native customs.
Just as armchair philosopher Jean-Jacques Rousseau once embraced the idea of noble savagery, Cole and Dale portray prostitutes as heroically tragic feminists. Nothing a hooker says is questioned; everything is taken at face value.
Like the explorers of old, the filmmakers emphasize the bizarre and the colourful. Transsexuality obviously fascinates them, with the result that far more screen time is devoted to boy/girls — Mark/Michelle, Curtis/Tiffany and Jackie — than to born females Tiggy, Ricky, Joey and Bev.
Prostitution is an issue of more than passing interest and a legitimate concern for a lot of groups in Vancouver these days. Inept, ingenuous travelogues like Hookers On Davie are designed to serve none but the sensation seekers.

Afterword: On Friday, December 20, 2013, the Supreme Court issued its ruling in Canada (AG) v Bedford. In a 9-0 decision, the Justices held that Canada’s prostitution laws were unconstitutional and gave the federal government one year to update them. While it's impossible to say what effect, if any, the work of activist filmmakers like Janis Cole and Holly Dale played in raising the consciousness of the Court, it’s clear that they were a part of the significant shift in social and political attitudes that its unanimous decision represented.
Rereading my review of Hookers On Davie more than 30 years later, I recognize my response to the film involved a circling of the wagons on two issues not directly related to its subject matter. Its raw immediacy challenged my idea of what a documentary should be. At the time, I regarded any departure from a proper Griersonian distance as a betrayal of journalistic subjectivity, and that made it immediately suspect. I was also suspicious of the Central Canadian filmmakers, two self-described “street kids” who’d learned their craft at Ontario’s Sheridan College and who had crossed the country to point the finger at Vancouver’s sex workers. To use an old truism, if I'd known then what I know today I’d have written a more nuanced notice.
For example, I subsequently learned that Janis Cole was born in Vancouver . She probably had a better feeling for the city than me (a transplanted Torontonian). I’ve also learned that the filmmaking partners did months of pre-production research and confidence-building within the community before shooting began. Their peers recognized their professionalism with a nomination for 1985’s best theatrical documentary Genie. (In 1981, their ground-breaking P4W Prison for Women had won the Genie for best doc.) Although they remain partners in a Toronto-based company called Spectrum Films, Cole and the Toronto-born Dale co-directed just one more feature. Their 1988 documentary Calling the Shots was a penetrating look at female film directors.
They discussed their feminist activism — Dale has called it giving a “voice to our friends who weren't ashamed of who they were or what they did” — with Matthew Hayes in his 2007 book The View from Here: Conversations with Gay and Lesbian Filmmakers. Today, Janis Cole is a continuing professor at Toronto’s OCAD University (formerly the Ontario College of Art and Design), where she teaches screenwriting. Holly Dale continues to be in demand as a television director. Her recent credits include work on some of my favourite series, including CBC’s The Border (2009), NBC’s Grimm (2011-2012), ABC’s Castle (2011-2014) and Agents of S.H.I.E.L.D. (2013-2014). She directed all six episodes of the 2017 Canadian miniseries Mary Kills People.