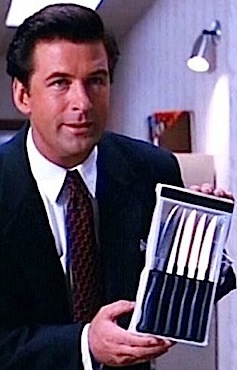 
Mamet questions the good in greed


Three weeks ago, an email from Vancouver's Biz Books alerted me to the opening tonight (June 6) of Classic Chic Productions' adaptation of Glengarry Glen Ross. Its staging of David Mamet's testosterone-heavy play features an all-woman cast, among them Catherine Lough Haggquist, founder of the specialty bookseller Biz Books. Vancouver, a major North American television and motion-picture production centre, is a magnet for performing talent. Among the side benefits is a dynamic live theatre scene, one that has included the emergence of some innovative companies featuring the community's creative women. In May, The Escape Artists presented, in repertory, Miss Shakespeare and J. Caesar, two new works performed by a company of seven. The first, an original musical, imagined sisters Judith and Susanna defying social conventions to follow in the footsteps of their actor-playwright father. The second set the Bard's Roman tragedy in an all-female future. Founded in 2007 by Steve Charles and Tracey Power, The Escape Artists' new works deserved the standing ovations they received. Classic Chic, founded in 2014 by Christina Wells Campbell, takes as its motto: "Chicks bringing class to the classics. 'Cause why should the boys have all the fun?" It made its debut last July with Shakespeare's A Winter's Tale. Tonight, a cast of seven women will bring new intensity to a Mamet play that was first adapted to the screen in 1992, Glengarry Glen Ross.

Friday, October 2, 1992
GLENGARRY GLEN ROSS. Written by David Mamet, based on his 1983 stage play. Music by James Newton Howard. Directed by James Foley. Running time: 100 minutes. Rated 14 Years Limited Admission with the B.C. Classifier's warning: frequent very coarse language. WHEN THE GOING GETS tough, the tough get lectures.
"I'm here from downtown," Mr. Blake (Alec Baldwin) tells the Premiere Properties sales staff. "I'm here from Mitch and Murray."
Blake is not a nice guy. A brass-balled piranha, his idea of motivation is to heap abuse on the already demoralized David Moss (Ed Harris), George Aaronow (Alan Arkin) and Shelley "the Machine" Levene (Jack Lemmon).
With the exception of unstoppable Ricky Roma (Al Pacino), they are not closing enough deals. So, on behalf of absentee managers Mitch and Murray, the unsympathetic Blake announces a sales contest.
The top man wins a luxury car. Number Two gets a set of steak knives.
Everybody else gets fired.
Glengarry Glen Ross is not a nice movie. Playwright David Mamet's own adaptation of his Pulitzer Prize-winning 1983 stage drama, it is in the bracingly bitter tradition of Arthur Miller's classic Death of a Salesman.
Visually haunting and pertinent, the film version is directed by James (After Dark, My Sweet) Foley. Blessed with a dream cast, he combines Mamet's profanely eloquent social criticism with an elegant sensitivity to the look of urban loneliness.
Foley begins and ends his picture with shots of passing elevated trains, the anonymous passengers strangers to us and to one another. Midway through, two of his salesmen meet in a diner, and the image recalls Edward Hopper's evocative painting Nighthawks.
Glengarry and Glen Ross are the names of real estate parcels in places like Florida and Arizona. In good times, the Chicago-based commission salesmen have little difficulty "closing" deals with "leads" sent to them from downtown.
Mamet, like Miller before him, writes about the disillusionment and despair that come with tough times. His salesmen are men who've bought into a vision of America and a success ethic with an unsparing dark side.
They are not nice men. Capable of charm and adept at creating the illusion of sincerity and concern, each one of them lives by the law of the free-enterprise jungle — never give a sucker an even break.
This evening, Blake confronts them with the downside. Management, represented by office manager John Williamson (Kevin Spacey), has no commitment to old sharks like Levene and Aaronow.
By implication, younger sharks Moss and Roma are expected to feast on their remains. Mamet's message is that these salesmen, like the folks who buy their dubious investment properties, have been suckered. When a depressed economy renders their life's work valueless, they've no one to blame but themselves.
In a hard times election year [1992], Mamet's unsentimental examination of 18 hours in the life of some classic American greed-is-good hustlers is political cinema at its finest.

Afterword: It felt like a reaction to Gordon Gekko's breathtakingly ruthless "greed . . . is good" speech from Oliver Stone's 1987 feature Wall Street. In fact, Glengarry Glen Ross was first produced on the London Stage in 1983, where it was seen by some as a response to Thatcherism. When it made its Broadway debut a year later, some commentators mentioned Reaganomics. Although efforts were made to bring it to the screen as early as 1985, Hollywood wasn't quite ready for its all-out assault on American "values" until after Stone's picture became a financial success, producing a best actor Oscar win for Michael Douglas (as the loathsome Gekko). Mamet's social criticism remains as powerful and relevant today as it was then. I suspect that audiences for the current Classic Chic production in Vancouver will tune into the fact that the play's setting is a real estate office. Housing prices are much on the minds of Vancouverites in 2015, an issue that has attracted international attention, including this analysis in the Harvard International Review. Also worth reading is the interview with Classic Chic's artistic director Christina Wells Campbell on the Biz Books website.