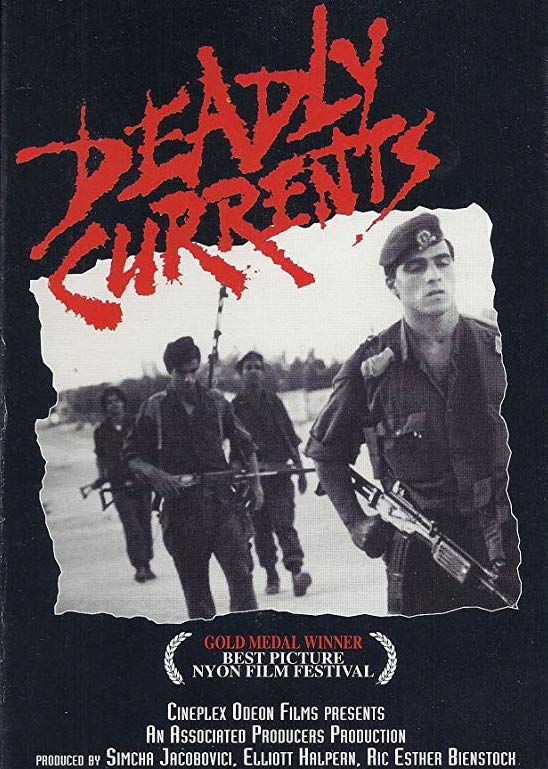 
Yesterday (May 14), Israelis celebrated the 70th anniversary of the independence of their modern state. Today, Palestinians observe their Day of Catastrophe, the beginning of the ongoing conflict examined in director Simcha Jacobovici’s 1991 documentary Deadly Currents.

Monday, October 28, 1991.
DEADLY CURRENTS. Documentary examination of the Palestinian-Israeli conflict. Music by Stephen Price. Produced and directed by Simcha Jacobovici. Running time: 115 minutes. Rated Mature with the B.C. Classifier’s warning: scenes of violence, occasional very coarse language and nudity. THE QUESTION IS put with scholarly detachment.
"We have to look at what it means to have the Jewish state of Israel in the Middle East," says a bearded, pleasant-looking professor in Simcha Jacobovici's documentary Deadly Currents.
And what does it mean?
Without hesitation, Jacobovici cuts from the interview to a closeup of rifle mechanisms being cleaned and loaded by Israeli soldiers.
The question is on the table in Madrid this week [1991] as Presidents George Bush and Mikhail Gorbachev play host to an international conference convened to discuss issues of peace and war in the Middle East
After more than 30 years of jockeying for influence in the region by supplying arms and munitions to their client states, these "great powers" are now, in the words of the old joke, counselling Muslims and Jews to act like Christians.
There is madness here. In the streets of Tel Aviv, Jacobovici found Juliano Mer, an adult child of the conflict and the product of a tragically broken homeland.
His father, Mer tells us, was an Arab, while his mother was a Jew. Because his father was a distant, angry man, Mer preferred his mother, and initially favoured Israel to the point of serving in "the parachutes."
Disillusioned with military orthodoxy, he later turned radical, espousing the cause of the Palestinian Liberation Organization (PLO). Still later, and still further disillusioned, he fled to the Philippines, where he sought enlightenment in drugs.
Jacobovici encountered Mer in Tel Aviv, a street performer enraging passers-by with his political pantomime. In his angry, provocative dumb show, Mer makes explicit the madness of the present situation.
Like Mer, Jacobovici is less interested in causes than effects. His Deadly Currents opens with a brief historical summary juxtaposed with evocative black-and-white footage of Israeli occupation forces patrolling the ancient streets of the West Bank city of Nablus.
Though Israeli-born and Jewish, Jacobovici is at pains to present a scrupulously fair account. Together with his crew, he sought out those engaged on the front lines of the intifada: Israeli troops, Palestinian resistance fighters, network television newsmen and activist artists.
To be fair, he listens to various spokespersons and analysts. As a result, we hear of the tangled strands of history and belief that give shape to this blood-soaked knot.
More important to our understanding, though, are the individuals wrestling with despair in the face of official madness.
What are we to make of Israel's young soldiers, sworn to be resolute, yet struggling internally with the justice of their mission?
Or of the masked, pitiless Palestinian youths terrorizing their own Arab neighbours for acts of "collaboration" with the Israeli "enemy"? Or the physically courageous, morally empty newsmen who go about their jobs with fine, neutral cynicism?
Jacobovici looks to the region's socially committed performing artists for his answers. Israeli and Palestinian alike, they draw their inspiration from the daily tragedy they see around them, reflecting in song, dance and drama the anger of people on both sides.
"No, don't tell us of the child who lost an eye," pop singer Nurit Galron tells her Tel Aviv nightclub audience. Her song, heavy with ironic commentary, insists that we enjoy the good life and its pleasures.
Jacobovici underscores her lyrics with scenes of idyllic topless beaches intercut with scenes of rock-throwing children in the occupied territories.
A feature that adds substance to the headline rhetoric, Deadly Currents could hardly arrive in Vancouver at a more auspicious moment. Jacobovici's film is a work of conscience as well as art.

Afterword: In the 27 years since Deadly Currents premiered in Vancouver, the situation it examined has only gotten worse. Yesterday (May 14), as the U.S. was officially opening its new embassy in Jerusalem, 58 unarmed Palestinians were shot dead by Israeli army snipers during a protest on the Gaza side of the so-called “security fence” with Israel. An estimated 2,700 others were wounded. The day’s events reinforced the idea that what has passed for a “peace process” since the 1991 Madrid Conference was dead, and that the U.S. could no longer play an “honest broker” role (as if it ever had). It has become difficult, if not impossible, to believe the long-established narrative that nuclear-armed Israel is somehow a beleaguered good-guy state facing unending “existential" threats.
It was a compelling narrative, and a given in Anglo-American popular culture. As a teenager, I read Leon Uris’s influential best-selling 1958 novel Exodus, and enjoyed director Otto Preminger’s epic 1960 film adaptation. To this day, I can recall lyrics from Milk and Honey, the 1961 Broadway musical celebrating life in the new nation. In the years since, I’ve discovered a counter-narrative, one that argues that the Zionist ideology, upon which the state is founded, is not necessarily a force for good in the region. Artists such as Simcha Jacobovici and scholars like Norman Finkelstein (both the sons of Holocaust survivors) told a different, more complex story. Many now say that modern Israel fits the dictionary definition of an apartheid state.
Though I wish it were’t so, Jacobovici’s Deadly Currents — a Genie Award-winner for Best Documentary — is as relevant today as it ever was. In recent years, Jacobovici has produced and directed works of “investigative archeology,” including the controversial 2007 Discovery Channel documentary The Lost Tomb of Jesus. Of the people mentioned in the above review, Juliano Mer-Khamis remained committed to effecting change through the arts. He was shot to death in 2011 as he was leaving the theatre he founded in Jenin, a West Bank Palestinan city. Nurit Galron, now 67, performed her “greatest hits” during a five-city U.S. tour earlier this year. If she made any politically-charged comments during her performances, they were unreported.