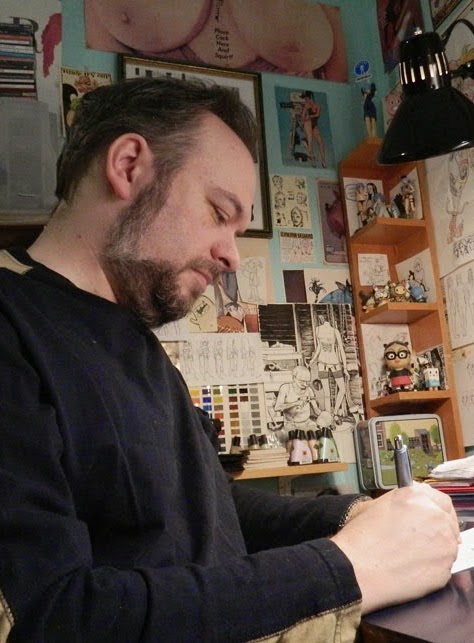 There ought to be a law


Chronicling comics and other outrages


An astrologer might argue that the stars were in alignment on July 28, 1973, the day that Robin Bougie was born in Uranium, Saskatchewan. Cosmic forces were in play to shape his talent and interests, creating the Vancouver-based artist, magazine publisher, film journalist and occasional movie producer that we know today. And it's true that some seismic shifts occurred in the popular culture that year. On January 21, New York Times Magazine reporter Ralph Blumenthal coined the term “porno chic” to describe the emergence of a previously sub rosa film genre. On April 20, the University of California played host to the first Berkeley Con, a student-run celebration of underground comics and alternative art. (It didn’t hurt, astrologically speaking, that Bougie shares a birth date with hell-raising artist Marcel Duchamp, the French Dadaist who famously submitted a urinal, signed R. Mutt, to the 1917 New York Armory Show.) In 1997, it all came together when Bougie published his first issue of Cinema Sewer, a movie magazine in the style of an underground comic that enthusiastically champions exploitation, cult and adult movies. “I like to think of it as something that has all the research of an academic paper, but with all the personality of a letter from a friend,” he said in a recent interview. Bougie, who turns 43 today, says that a movie inspired him to take up the cartoonist’s pen, specifically Canadian director Ron Mann’s 1988 documentary feature Comic Book Confidential.

Friday, October 28, 1988.
COMIC BOOK CONFIDENTIAL. Music by Dr. John, Keith Elliott, Gerard Leckey and Nicholas Stirling. Documentary feature produced and directed by Ron Mann. Running time: 85 minutes. Rated Mature with the B.C. Classifier’s warning: occasional very coarse language and suggestive scenes. WE'RE LOOKING AT FOOTAGE from the 1950s. It's from a TV special produced to alert parents to a new danger facing America's youth — comic books.
“There ought to be a law against them,’’ says the program host, holding up one of the billion comics printed that year.
“Tonight, I'm going to show you why.”
Publisher Bill Gaines remembers what it was like. As the single most successful producer of crime and horror-themed titles, his E.C. Comics line was the target of much parental outrage.
One of 22 interview subjects in Ron Mann's visually imaginative documentary Comic Book Confidential, Gaines reminds us that when American boys went off to war in 1942, they took their comic books with them.
During the 1940s, customer-conscious publishers began tailoring their product to the tastes of more adult readers, offering storylines that were more gutsy and violent.
In the post-war period, parents began noticing that there was some pretty shocking stuff on local comic racks. The first public outcry came in early 1948, when police and educators suggested that there might be some connection between comic book readership and juvenile delinquency.
In Canada, they said ''there ought to be a law” and, in Ottawa, British Columbia Conservative Davie Fulton sponsored a successful private member’s bill to ban the damned things.
Since 1949 it has been a crime in this country to “to make, print, publish, distribute, sell or possess crime comic books.
In the U.S., they said “maybe there shouldn't be a law, but somebody should do something.” An Association of Comic Magazine Publishers was founded to police the industry and, in 1954, it introduced a “Comics Code.”
Now, given that Mann’s film is a Canadian production, and that  his financial backers include the Canada Council, the Ontario  Arts Council, Telefilm Canada, the Ontario Film Development Corporation, Toronto's CITY-TV and Cineplex Odeon Films, I expected  to see something about our own quick-to-censor Canadian federal government in it.
I was disappointed. With the exception of one comic book cover (a Canadian Heroes from 1943) in a montage of wartime titles, the entire focus of Mann's survey is American.
A discussion of Superman, for example, never mentions that the character’s co-creator, Joe Shuster, was a Canadian. Important Canadian figures on the contemporary comics scene, such as Dave Sims, Rand Holmes, Brent Boates and Arn Saba are all ignored.
A competent documentarist rather than a comics historian, Mann approaches culture via its practitioners. His previous examinations of the North American arts include lively looks at jazz (1981’s Imagine the Sound) and poetry (Poetry in Motion; 1982).
In his exploration of comics, Mann bites off far more than he can comfortably chew. The 1950s crusade against comic books, the fraught evolution of the superhero, the underground comix movement and the emergence of the modern direct sales comic shop are all feature-length subjects in and of themselves.
By attempting to cover it all, Mann ends up covering not very much at all. Vivid and superficially attractive, his film offers little more than a razzle-dazzle introduction to a much-maligned art form.

The above is a restored version of a Province review by Michael Walsh originally published in 1988 For additional information on this archived material, please visit my FAQ.

Afterword: And that is what’s known in the business as a mixed review, the sort of notice that confounds rating systems based on thumbs, stars or bruised fruit. I thought it was wonderful that someone with Ron Mann’s cinematic skills had made a serious film about comic books. I was frustrated that he’d ignored the Canadian component of his story. (Of the 32 artists featured on the film’s poster, not one was a Canadian.) Artist Joe Shuster, the co-creator of Superman, was still alive in 1988, and remained so until 1992. Nearly two decades later, I learned that Mann’s movie had inspired Robin Bougie, the talented and seemingly tireless chronicler of cultural ephemera and movie marginalia. During his 25 years as an independent comics creator, he’s produced a body of work that deserves to be recognized in its own film documentary. As today (July 28) is his birthday, I’ll give the final word to Bougie. In September, 2011, the Cinema Sewer  publisher contributed a guest column to the Canuxploitation! website in which he set out what Comic Book Confidential meant to him:
“I’ve been drawing and self publishing my own comics for exactly 20 years now [2011], and it has been a wonderfully rewarding job/hobby (jobby?) that has held my hand and seen me through tough times, and provided me with an unbeatable creative outlet. Through those years I’ve done over 130 comic books of various size and page counts. Some were funny, some were disturbing, some were sexy, and in each one I was the director, the actor, the cinematographer, the producer, the writer — and I did it all with the meagre budget of some pens and some paper. But you know what? All of that might never have occurred if I hadn’t happened upon Ron Mann’s documentary on late night TV one night in 1991 — at the impressionable age of 18. With a focus on the history and the (then) modern world of independent and underground comics, Mann’s movie inspired me to sit down and begin work on my own comics the very next day — and I’m still going strong. Thanks Ron! Your movie meant the goddamn world to me.”