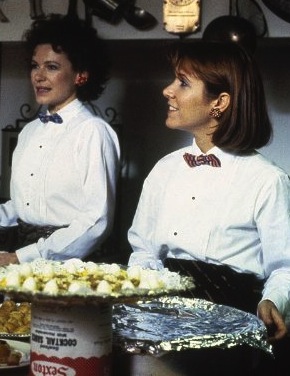 Hannah's sister Holly (Dianne Wiest, left), who is partnered with April (Carrie Fisher) in a catering business, becomes April's rival for love in Woody Allen's 1986 feature Hannah and Her Sisters.

Treats amidst the angst


We all know her backstory. She was born a princess to a father who abandoned her mother after being seduced to the Dark Side. What's harder to know is whether Carrie Fisher, who celebrates her 58th birthday today (October 21), saw the parallels to her own life when she read for the part of Princess Leia Organa in the original Star Wars. Her parents, Eddie Fisher and Debbie Reynolds, were Hollywood royalty. Their 1955 marriage was a national celebration. Then Eddie, besotted with the dark-haired, much-wed Elizabeth Taylor, left redheaded Debbie. The biggest show business scandal of the 1950s, it left two-year-old Carrie fatherless. She became a star in her own right at 20, in the science-fiction blockbuster of 1977. Since then, it's been a bumpy ride involving such tabloid fodder as rocky relationships, drugs, weight problems and electroconvulsive therapy, along with success as an actress and writer. Currently, she is involved in the final weeks of production on director J.J. Abrams's Star Wars: Episode VII, reuniting Fisher with Harrison Ford, Mark Hamill, Kenny Baker and Peter Mayhew. Scheduled for a Christmas 2015 release, the new movie will pick up the story of Luke Skywalker, Han Solo and Leia some 30 years after their victory celebration in Return of the Jedi. Today, though, Reeling Back recalls her work in another tale of family reunion, Woody Allen's 1986 feature Hannah and Her Sisters.

February 26, 1986.
HANNAH AND HER SISTERS. No credit for music. Written and directed by Woody Allen. Running time: 106 minutes. Mature entertainment with the B.C. Classifier's warning: occasional suggestive language. AUTEURS! YOU CAN'T TRUST them. Just when you have them figured out, they start fooling around with their formulas.
Take Woody Allen, the Brooklyn-born Ingmar Bergman wannabe. Until now, his movies have bean satisfyingly consistent — one on and one off.
It's worked that way for years. Manhattan (1979), A Midsummer Night's Sex Comedy (1982) and Broadway Danny Rose (1984) were all uninspired, largely indifferent features, the sort of pictures that one makes to maintain a schedule, not a reputation.
By contrast, Stardust Memories (1980), Zelig (1983) and The Purple Rose of Cairo (1985) were delightfully on. Each had a freshness, depth and imaginative daring that one expects of a cinematic genius.
This year, going by the established pattern, is supposed to be AIlen's off year. Accordingly, I didn't expect a lot from Hannah and Her Sisters.
Darned if I wasn't right.
And wrong.
Darned if Allen doesn't manage to be off and on within the same movie. Here is the writer-director's own Scenes from a Manhattan Marriage, offering yet another predictable La Ronde of amatory anxieties.
It also contains some superb comedy. There's one gag in there that left me absolutely helpless with laughter, a rare occurrence in recent years, let me tell you.
As befits a product of the off-season Allen, the new picture is less a story than a series of 16 loosely-connected episodes. Each one is introduced by a title card displaying a bit of dialogue ("God, she's beautiful"), the subject of the scene (The Anxiety of the Man in the Booth) or a homily ("The only absolute knowledge obtainable by man is that life is meaningless" — Tolstoy).
Though Hannah (Mia Farrow) is the title character, the film's attention is focused on her sisters Lee (Barbara Hershey) and Holly (Dianne Wiest). Less stable in their love lives than the happily-married Hannah, they involve themselves with various men, all of whom represent aspects of director Allen himself.
Hannah's husband Elliot (Michael Caine), a bespectacled romantic having a mid-life crisis, has a brief affair with Lee, who is living with Frederick (Max Von Sydow). An uncompromisingly intellectual artist, Frederick has a terrific scene in which he rails hilariously against public television, wrestling and broadcast evangelism.
Holly finds herself in competition with her best friend April (Carrie Fisher) for the affections of a smoothly superficial architect named David (Sam Waterston). She ends up with Hannah's ex-husband, angst-ridden TV comedy writer Mickey Sachs (Allen).
Giving up her acting ambitions, Holly turns to writing and achieves success by recycling her personal neuroses, family and friends through her fiction.
That, as we all know, is more or less how Woody Allen rose to prominence as a feature filmmaker. It is also what he does to mark time while he's working out an idea for one of his on-year projects.
To give the man his due, this is his most entertaining off-season diversion ever. Though filled with familiar Allen themes and characters, Hannah and Her Sisters has the saving grace of delivering on the comedy.

Afterword: A year after Hannah and Her Sisters, actress-turned-novelist Carrie Fisher published Postcards from the Edge (1987), the semi-autobiographical tale of an actress recovering from a drug overdose. Three years later, she made her debut as a screenwriter, adapting her novel for director Mike Nichols. The 1990 movie version starred Meryl Streep as its Fisher-like character, and Shirley MacLaine as her mom. Not at all shy about recycling her personal neuroses, family and friends through her fiction, Fisher has added three more novels to her resume, and a remarkable made-for-TV movie called These Old Broads (2001). I say "remarkable" because the picture — the story of three elderly actresses and their manager reunited to celebrate renewed interest in their "classic" 1960's hit Girl Crazy — features characters played by Debbie Reynolds and Elizabeth Taylor. The two play a scene together recalling how the one broke up the other's marriage. "I was with Freddie because I was in a blackout," Taylor's character says, delivering a line to Reynolds written by Reynolds's daughter. "What's your excuse?" Yes, everything is grist for the celebrity survivor's mill. Adding a Canadian connection to Fisher's tale is her brief engagement to Ottawa-born Dan Aykroyd, who proposed to her on the set of the 1980 feature The Blues Brothers.