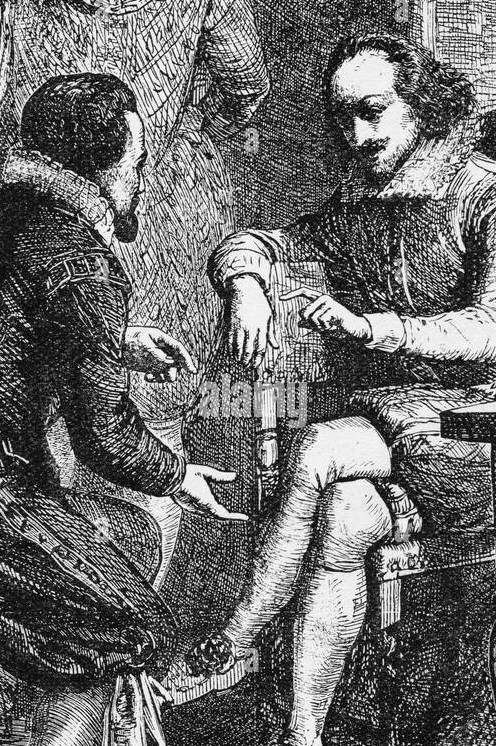 A 19th century engraving imagines Every Man in His Humour playwright Ben Jonson debating the classical unities with William Shakespeare.


“So, good night unto you all.” Tonight (September 24), the words of Puck (played by actress Sarah Roa) will bring A Midsummer Night’s Dream, as well as the 2022 season of the Bard on the Beach Festival, to an end. Founded in 1990, the summertime celebration of Shakespeare was much missed during a two-year hiatus brought about by the COVID-19 pandemic. Yet again, I am reminded of the special place Stratford-on-Avon’s favourite son has had in my Vancouver memories since 1971. That year, for eight amazing days, the city played host to the first World Shakespeare Congress, the midsummer dream of Simon Fraser University professor Rudolph Habenicht. Recognizing its importance, The Province offered daily coverage of the proceedings, recalled in this ten-feature Reeling Back package. My reporting of the event continues with this WSC Wednesday report. It includes my coverage of papers presented contrasting Shakespeare with his Elizabethan contemporaries Ben Jonson and Christopher Marlowe.

FOR A STAGE DIRECTOR there is nothing more precious than sustained applause from an intelligent, well-informed audience. Few, though, have ever been given an opportunity like the one awaiting Victor Mitchell of the University of Calgary.
This Thursday and Friday evening [Aug. 26-27, 1971] his student company is presenting Ben Jonson's Elizabethan satire Every Man in His Humour. Their audience: the 500 delegates to the World Shakespeare Congress.
The delegates, the single greatest concentration of Elizabethan expertise ever assembled in one place, won't be an easy audience. They will, however, be well informed.
Tuesday morning [Aug. 24, 1971], the Congress considered papers on Shakespeare and his Elizabethan contemporaries. Among them was Jonson, the bricklayer's stepson who rigorously abided by the classical unities and constructed his comedies with the care and regularity of a wall.
By contrast, Shakespeare's great strength lay in his flexibility and willingness to experiment with his dramatic form, reported David Bevington of the University of Chicago. Jonson wrote satires, the purpose of which was to castigate human folly in the classically typical way, Bevington said. His plays were peopled with well-bred, beautiful nobles, crafty servants, young lovers, churlish parents: a parade of "humours," or representative types, for the heroic nobles to collect and correct.
The purpose of Jonson's art was "the taxing of human crimes." Set against one another, his gulls each receive the ultimate punishment — exposure and ridicule. Not surprisingly, Bevington said, Jonson was often the object of libel suits.
Shakespeare, too, was aware of the satirical form, but he chose to flirt with it rather than embrace it. In As You Like It, he allowed Jaques, the melancholy philosopher in the Forest of Arden, to debate the satirical viewpoint at length.
Issues were brought out, but remained unresolved. Classical satire was uninteresting to Shakespeare, Bevington said. He preferred his characters to have many points of view and concentrated on the farce of mistaken identity.
The same urge to experiment, innovate and go his own way is even more strikingly evident in Shakespeare's response to the influence of Christopher Marlowe, said Wolfgang Clemen of the University of Munich.
Shakespeare was well aware of Marlowe's work, Clemen said. He responded independently, determined to do something quite different. To demonstrate his point Clemen examined "the physiognomy" and dramatic rhythm of two plays: Marlowe's Edward II and Shakespeare's Richard II.
In comparing them, Clemen noted that though the plays told similar stories, they presented them in totally different ways.
Where Edward II is full of stirring action, brief speeches and personal conflict that maintain a rapid, turbulent rhythm, Richard II is settled, reflective and abstract with a constant, steady rhythm.
For Shakespeare the step from the style of Richard III to Richard II was the most amazing in his career, Clemen said. With Richard II he began constructing complex, multi-level dramas, clarified by imagery and the use of key words.
"It is of particular interest that Shakespeare began to develop his new dramatic mode against the background of Marlowe's Edward II and probably in deliberate opposition to it," Clemen said.
In a panel discussion later, G.K. Hunter of the University of Warwick offered a caveat for all delegates. All the speakers were in danger of being caught in the dilemma of progressivism, he said.
Against the background of their deliberations, delegates are looking forward to the University of Calgary Drama Department's performance of Jonson's Every Man in His Humour in the Frederic Wood Theatre.
"What I think the play is," said Trevor Lennam, incoming head of Calgary's drama department, "is the first comedy of manners. Jonson was looking forward to the great flowing of the comedy of manners that would come in the Restoration."
The 27-man company was invited to produce the play especially for the Congress. After the Vancouver opening, the troupe will present the play in Calgary's University Theatre.
Friday's performance at UBC is open to the public. Admission is $2 for adults and $1 for students. Curtain is at 8 p.m.
The Congress is sponsored jointly by Simon Fraser University, the University of B.C. and the Canada Council. Sessions are being held on both campuses.

Afterword: Then, as now, “the play’s the thing.” Though most of us were introduced to the works of Shakespeare in their written form — a staple of high school English classes — they really have to be experienced in performance. Being a high school student in Ontario circa 1960 included the privilege of a class pilgrimage to the province’s Stratford Festival, founded in 1952 by journalist and Bard enthusiast Tom Patterson. In 1969, the year that we moved to Vancouver, the Oregon Shakespeare Festival in Ashland was celebrating its 34th season. Vancouver’s own Bard on Beach has been an innovative annual event since 1990.
Today, Shakespeare festivals abound worldwide, with about 14 in Canada, some 18 in the United Kingdom and perhaps140 more in the United States. And, dare we speculate, at least one in the Klingon Empire’s First City? The extraterrestrial regard for the Bard was made clear to Federation Captain James T. Kirk who’s told that “You have not experienced Shakespeare until you have read him in the original Klingon.” It was among the memorable lines in 1991’s Star Trek VI: The Undiscovered Country. The film reunited veteran Stratfordians William Shatner (as Kirk) and Christopher Plummer, who played General Chang, the genial Bardolater who’s never without an appropriate quote from the canon.
I should also mention that David Bevington’s Shakespeare vs. Jonson on Satire and Wolfgang Clemen’s Shakespeare and Marlowe are among the papers included in Shakespeare 1971: Proceedings of the World Shakespeare Congress Vancouver, August 1971, published by the University of Toronto Press in 1972.