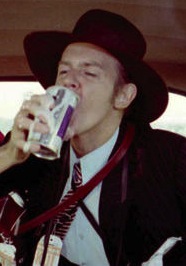 Bazza (Barry Crocker) fortifies himself for London and the furtherance of his cultural traditions in director Bruce Beresford's 1972 picaresque comedy, The Adventures of Barry McKenzie.

Up from Down Under


The weather bureau is forecasting rain for today's Australia Day (January 26) celebrations, so break out the brollies and slip an extra shrimp on the barbie. And don't forget a tube of the foamy frosty to go along with a viewing of 1972's The Adventures of Barry McKenzie.

Sunday, November 17, 1974.
THE ADVENTURES OF BARRY McKENZIE. Co-written by Barry Humphries, based on his 1964 comic strip An Aussie in Pommyland. Music by Peter Best. Co-written and directed by Bruce Beresford. Running time: 114 minutes. Mature entertainment with the B.C. Classifier's warning: coarse and suggestive language throughout.
"drain the dragon, to. (SEE UNDER point percy, syphon the python, strain the potatoes, water the horses, wring the rattlesnake, shake hands with the unemployed, slash, ETC.) To Micturate"
— quoted in A Digest of McKenzieisms, compiled by Barrie Humphries.

WHEN BARRY McKENZIE HAS to go, he tells people.
Sometimes, he tells them more than once. The Adventures of Barry McKenzie features a scene during which he completely dumbfounds his non-Australian hosts by phrasing the same vital question in 10 different ways.
"I think he's looking for the loo," one of them finally says, and the island continent's gamiest export since the Tasmanian devil is able to find his well-earned relief.
Barry McKenzie —Bazza to his friends — is the colourful creation of Australian satirist Barry Humphries. A fine, jut-jawed example of Antipodean manhood, he is footloose in London fulfilling the provisions of a will ordering him to "further the cultural and intellectual traditions of the McKenzie dynasty."
Since 1964, his adventures — written by Humphries and illustrated by New Zealand artist Nicholas Garland — have been convulsing readers of Britain's sabre-toothed satire magazine Private Eye. Banned in Australia until recently, the comic strip was turned into a movie script three years ago [1971], emerging finally as a triumphantly funny film.
Humphries's screenplay, co-written by director Bruce Beresford, skillfully links seven independent episodes from the original comic. For the purposes of the film, he introduces a new character, Barry's Auntie Edna (played by a cross-dressing Humphries), a Melbourne matron who has long been a prominent part of the comedian's stage shows.
Bazza, of course, remains the centre of attention. As played by Australian popstar Barry Crocker, he retains his native wit, naïveté and principal preoccupations: playing hospitals with the sheilahs and draining tubes of the foaming frosty. (Although he expresses no preference, he has more success finding agreeable drinking partners.)
Bazza stalks through his movie in a double-breasted blue suit and brown felt Akubra, an ensemble that is never complete unless accompanied by a purple Qantas flight bag. A lovably ugly Aussie, he's a national image that stands a good chance of replacing the kangaroo.
He's not just an object of ridicule, though. Humphries's satirical blade cuts both ways. If Bazza is the Englishman's idea of the typical Aussie, then the Britons in the film are all seen through jaundiced Australian eyes.
Bazza wears a T-shirt — seen during his outré tryst with fashion model Caroline Thighs (Maria O'Brien) — labelled "Pommy Bastards". He's not surprised to discover that "when it comes to fleecing you, the poms have the edge on the gyppos."
It seems that everybody is out to take our wild colonial boy for a ride, from the cabbie who manages to pass Stonehenge on the road between Heathrow and Earl's Court, to the hippie musicians to whom he ingenuously signs away the world rights to his bawdy Australian beach ballads.
"We believe in the abolition of money," says the long-haired entrepreneur with the mid-Atlantic accent (Humphries in a second role). We want you to be a test case."
The ride offered by director Beresford is a bonzer (SEE UNDER whack-the-diddle-oh) one for the audience. Along the way, writer Humphries provides an immersion course in contemporary Australian. A crudely poetic dialect, it is an offshoot of modern English that owes many of its best expressions to Humphries's own linguistic ingenuity.
To help filmgoers through, the film's Canadian distributor provides a pocket guide to some of the meatier McKenzieisms. It's hardly necessary, though.
Beresford and Humphries have structured their movie in such a way that before it's half over most of Bazza's meanings are hilariously self evident.
Made with the financial assistance of the Australian Film Development Corporation, their picture suggests that movie-makers down under have fewer identity problems than those in English Canada. In the case of The Adventures of Barry McKenzie, the result is undiluted fun on the screen.

Afterword: In common with their colonial brethren in Canada, Australian artists always wanted to make movies. Unlike the diffident Canucks, though, Aussies are not shy about praising their famous men. Among the earliest feature films made there was the 1906 outback Western, The Story of Ned Kelly. Based on the crime spree of the 19th century bushranger, it kickstarted Australia's domestic film industry and created the tradition of celebrating the island continent's manly men. In the sound era, Kelly has been played by Mick Jagger (in 1970's Ned Kelly) and Heath Ledger (in 2003's Ned).
The Adventures of Barry McKenzie was director Bruce Beresford's debut feature, and one of the first films to emerge from the 1970s "renaissance" of national film production underwritten by the Australian government's Film Development Corporation. In short order, producers were able to find their own financing for pictures celebrating such historic heroes as Breaker Morant (1980) and Jim Craig, The Man from Snowy River celebrated in a famous poem and two features (1982 and a 1988 sequel).
Similar success greeted a new generation of Aussie avatars, including 1979's Mad Max (sequels in 1981, 1985 and 2015) and 1986's Crocodile Dundee (sequels in 1988 and 2001). Bazza returned to the screen one more time, in 1974's Barry McKenzie Holds His Own, and twenty years later Australian cinema demonstrated its capacity for comic diversity with The Adventures of Priscilla, Queen of the Desert (1994). Australian-born media mogul Rupert Murdoch's 1998 establishment of Fox Studios Australia in Sydney marked the beginning of big-budget international filmmaking, though the industry's new "success" seems to have been at the expense of the old Aussie individuality.