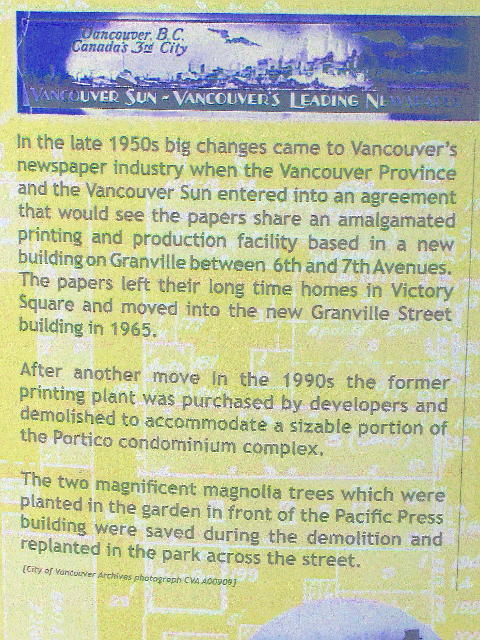 A plaque, affixed to a generic condo development at 2250 Granville, recalls the Pacific Press Building (1965-97), for 32 years the home of Vancouver's two daily newspapers.


Because of the importance of the print media to the entertainment industry, show business bible Variety followed the story of Vancouver's longest newspaper strike in its "Literati" and "Broadcast Market" sections.

LITERATI / February 7, 1979
The Vancouver Sun, shut down since November 1 by a labor dispute, is commiserating with its print-starved public via billboard. “We miss you, too!" is the afternoon daily's  boldface message. Presumably The Province, Vancouver's ayem daily, also out, misses its readers as well.

LITERATI / March 14, 1979
The continuing strike against Vancouver's two daily newspapers, now in its fifth month, has opened the door to at least two new publishing ventures. Intended as permanent additions to the British Columbia periodicals list are B.C. Business Week, a tabloid aimed at the local financial community, and Audience, a glossy monthly magazine surveying the entertainment scene.
Audience, introduced as a 12-page section in the February issue of Western Living magazine, becomes a full-fledged supplement this month. Recipients of Western Living, a controlled-circulation lifestyles magazine delivered to 65,219 homes monthly, will continue to receive Audience as an insert, although plans call for the new magazine to spin off as an independent publication available through hotels and tourist information centres.
Western Living, now in its ninth year, is owned by Bryan Publications, Ltd. To assume the extra work load, Bryan is increasing its production staff by three. Editorial material consists of listings, done by a full-time editor, and freelance articles. Audience has its own advertislng representative.
B.C. Business Week, first produced in mid-November, was originally intended as an interim paper that would cease publication when the newspaper strike was settled. According to issue 15, though, "we're here to stay."
In making the announcement, publisher Joseph R. Martin said that the controlled-circulation tabloid would add 5,000 copies to its present press run of 55,500, the additional copies to be distributed in Victoria, B.C.'s capital city.
The paper is produced by Martin's Pacific Rim Publications Ltd., publishers of the six-year-old B.C. Business Magazine and Purchasing in Western Canada Magazine, both monthlies.
George Froehlich, finance editor of the strikebound Vancouver Sun and editor of B.C. Business Week since its first issue, will remain with the weekly only long enough to train a permanent successor. Froehlich intends to return to the Sun if and when the daily resumes publication.

LITERATI / June 26, 1979
After nearly eight months without a newspaper, Vancouver readers will soon see two dailies competing for their attention. First off the mark was DN (for Daily News). A 12-page broadsheet, it made its debut Tues., June 19. Inspired, apparently, by Germany's Springer newspapers, DN concentrates on large pictures, large headlines and small stories. It sells for 25 cents a copy.
DN's owner-publisher is Peter Lusch, a West German who operates the paper through Lacon Canada Enterprises, a branch of Lacon International, his Saudi Arabian-based construction company. He plans to publish DN Monday through Friday.
Going daily on July 4 is the Vancouver Courier. A fixture in the Kerrisdale district for nearly 70 years, the Courier first expanded its operation from weekly to twice weekly following the November 1, 1978 closure of the daily Sun and Province newspapers.
Courier publisher Robin Lecky, together with his partners, financiers Gordon Byrn and William Lang, will continue to operate the tabloid-format newspaper through Granville Press Ltd. It will sell for 25 cents, Sunday through Friday.
In the meantime, The Vancouver Express, the interim newspaper turned out thrice weekly by the members of the six striking unions, has ceased publication. Citing difficulties in the purchase of newsprint, the Express called it quits with issue 97, dated Friday, June 22.
A contract offer by Pacific Press Ltd., the company that publishes both the FP chain-owned Sun and the Southam chain-owned Province, was ratified by The Newspaper Guild, engravers and mailers unions, a group representing nearly 1,060 of the company’s 1,400 employees. The company's offer, involving a 34.25 per cent increase in wages and a 3.5 per cent increase in fringe benefits over 40 months, was turned down by the printers, pressmen and wholesale drivers unions.
Because the unions bargain through a joint council, all of the unions must accept the contract before there can be a return to work.

BROADCAST MARKETS / August 1, 1979
Bill Casselman has left his job as a television reviewer for McLean's, Canada's weekly newsmagazine, to write a column for The Courier, Vancouver's tabloid-format daily newspaper.  Before taking up the pen, Casselman was a broadcaster with stints as a producer for the independently-owned CKVU-TV and the Canadian Broadcasting Corporation's national radio network to his credit . . .  With the end of Vancouver's long newspaper strike, several reporters have confirmed that their moves to television are  permanent. Paul Raugust, ex-Sun financial writer, and Chris Bird, former general-news reporter at the Province, will stay with CBUT. Dennis Bell, a one-time Province investigative reporter, remains with BCTV, while Ken Spotswood, former Province photo editor, stays with CKVU-TV.

LITERATI / August 1, 1979
The Province, Vancouver's largest circulating ayem daily, will begin publication of a Sunday edition Aug. 12. It will be joining the tabloid Courier in the Sunday newspaper market. To concentrate resources in the new project, The Province will suspend publication of its Saturday paper.
Both The Province and the afternoon Sun, shut down for nearly eight months by a strike, resumed publication on Friday, June 29. A head count of staff on that morning showed that The Sun had lost eight key editorial staffers; The Province, 16.
Most visibly missing to readers were Sun columnist Doug Collins and movie critic Les Wedman (both working for the new Courier) and Sun sports columnist Jim Taylor, who now is appearing on the pages of The Province.

The above are restored versions of five Variety dispatches by Michael Walsh originally published in 1979. For additional information on this archived material, please visit my FAQ.

AFTERWORD: In late 1978, two months into Vancouver's longest newspaper strike, the Toronto Star's Sid Adilman made me an offer I couldn't refuse. Sid, an old friend from my days at the Toronto Telegram, doubled as chief Canadian correspondent for the New York-based entertainment trade paper Variety. Knowing that I was among the underemployed, he asked me to sign on as Variety's man in B.C. As a stringer for the "show business bible," I was able to report upon the effect the dispute was having on the lives and careers of many of my colleagues in the changing news community.