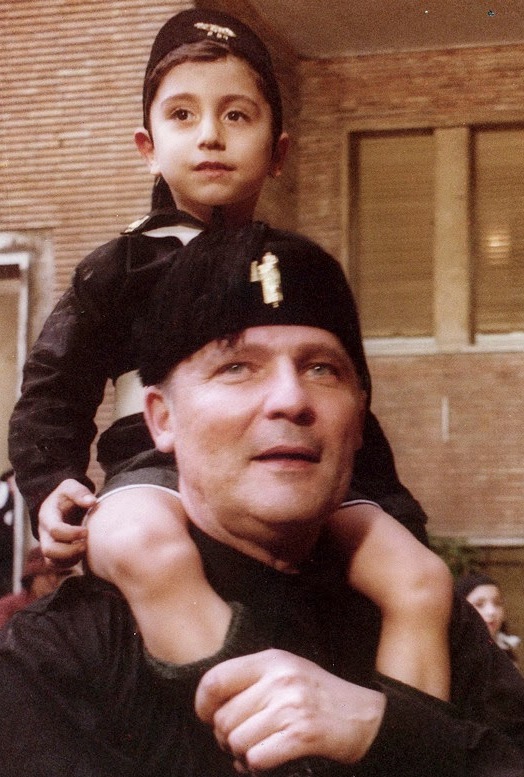 Mindful of its importance, Emanuele (John Vernon) makes sure that his son has a good view of the parade celebrating Hitler's visit to Rome in director Ettore Scola's 1977 feature, A Special Day.

Viewing from a distance


On this day (May 8) in 1938, Adolf Hitler paid a call on his Italian neighbour Benito Mussolini. Director Ettore Scola uses der Führer's Roman holiday as background for this 1977 Italo-Canadian feature, the story of romance blossoming in the Eternal City on A Special Day.

Tuesday, February 7, 1978.
A SPECIAL DAY (Original Italian title: Una giornata particolare). Co-written by Ruggero Maccari and Maurizio Costanzo. Music by Armando Trovaioli. Co-written and directed by Ettore Scola. Running time: 110 minutes. Mature entertainment with the B.C. Classifier's warning: occasional suggestive scenes. DON'T ASK ME WHY, but for some reason, arty Italian directors have a weakness for sex and politics.
Visconti, Pasolini, Bertolucci and Wertmüller — all of them have found the mix irresistible. The idea is to make a deep and meaningful statement on issues such as oppression, exploitation and the human condition.
Well, that's the idea.
By the time Ettore Scola got around to making A Special Day, though, there just wasn't much profundity left in the proposition. What he offers us is a well-worn cliché.
Ironically, his film could have worked on the purely human level. The director had the services of two of Italy's best-known performers, Sophia Loren and Marcello Mastroianni. Together, they are capable of generating all of the emotional content that a production needs.
Loren is cast in the role of a timid housewife. The mother of six, Antonietta is married to Emanuele (John Vernon), an unpleasant, macho lout. Gabriele (Mastroianni), the bachelor occupant of a neighbouring apartment, is considerably more sensitive. He is a homosexual, among those recently fired from the state-run radio corporation for "depravity."
One day, while hubby is out with the kids, they meet. Loren, despite a coating of make-up that is supposed to suggest dark shadows under her eyes, remains beautiful.
More to the point, though, Antonietta, the character she plays, is feeling horny.
Gabriele is interested in her less as a woman than as a person. He has been in a near-suicidal depression, and craves human companionship. Mastroianni, working under a day's growth of beard stubble, does his best to look elegantly hangdog.
The story of their brief encounter should have been a beautiful and moving drama. Unfortunately, Scola and his script collaborators couldn't leave well enough alone.
Their "special day'' has to be May 8, 1938, the day that all Rome turned out to see Italy's prime minister Benito Mussolini parade his armies for the entertainment of visiting German Nazi leader Adolf Hitler.
The rather fragile tale of Antonietta and Gabriele is set in counterpoint to all the fascist fussing. When she makes the sad confession that her blackshirt husband "is unable to talk — he orders," Hitler is heard ranting over the radio.
Scola injects the political content to increase his picture's significance and weight. The trouble is that the real emotions in the story become so overburdened that they sink out of sight.
The tenderness that we want to see grow naturally between two lonely people is reduced to symbolic responses to social conditions. Theirs is not so much a human relationship as the mechanical consequences of political excess.
By inflating his theme, Scola diminishes his characters.
It's too bad. Although Loren and Mastroianni are both finely-tuned performers, they are not nearly as effective as the acting team in Outrageous!, a 1977 Canadian film that had the courage to stay with its characters and concentrate on telling their story.
An Italo-Canadian co-production, A Special Day was shot on location in Rome with a mixed crew. Claude Fournier, with several domestic features including 1974's Alien Thunder to his credit, went abroad to act as Scola's dialogue director and Montreal liaison.
The print on view locally is dubbed rather than subtitled. Apparently it was far from a special day at the recording studio. The dubbing job, like Scola's sexual-political posturing, is unimpressive.

Afterword: Though I was dismissive of director Ettore Scola's mixture of sex and politics, it found favour in France, where it beat out Woody Allen's Annie Hall to win the 1978 César Award for best foreign film. It was also among the nominees for the 1977 foreign language film Oscar (it lost to France's Madame Rosa), and Mastroianni was a contender in the best actor category (he lost to Richard Dreyfuss in The Goodbye Girl). In 2006, a project was launched at the Venice Film Festival to select the 100 film italiani da salvare — Italy's 100 greatest movies. Its list, issued in 2008, included Scola's picture. A Special Day was one of two made as a result of 1970's Canada-Italy co-production agreement in which Sophia Loren and John Vernon played a married couple. The second, 1978's Angela, was filmed on location in Montreal. Among the fascinating family ties in A Special Day was the casting of Loren's real-life niece Alessandra Mussolini, who plays Antonietta and Emanuele's daughter, Maria Luisa. She is the daughter of Loren's sister, who married the son of Benito Mussolini, making the 14-year-old actress the granddaughter of the the man whose "special day" parade she attends in the movie. Encouraged by her aunt Sophia, she went on to pursue an entertainment career that included singing, acting and modelling. In the early 1990s, though, she returned to the old family business. Mussolini won her first election, and a seat in the Italian parliament, in 1992. She has since served in Italy's senate and is currently a member of the European Parliament. A complex and outspoken woman, she continues to be a newsmaker in the rapidly changing world of Euro-zone politics.