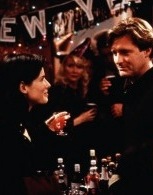 Waking up to love


A pleasure to see it play out


Happy New Year? An ambiguous greeting, the seasonal salutation is more an expression of hope than an established fact. Yesterday, New Year's Eve, is traditionally a time of celebration, libation and ultimate intoxication with the idea of "out with the old and in with the new." At the stroke of midnight at countless gatherings, 2014's happy survivors joined in singing Auld Lang Syne, a Scottish folk song performed for decades in New York's Waldorf-Astoria Hotel by a swing band called The Royal Canadians, formed by the Italian-Canadian Guy Lombardo, with his brothers Carmen, Victor and Lebert. Just how this incomprehensible bit of poesy became attached to the transitional moment is something of a mystery. Even more mysterious is why today (January 1) is a holiday. If we're so glad to be rid of the old year, then why not begin the new one straightaway? Instead of mourning Robbie Burns's "days of long ago," we should be singing Roger Miller's 1965 ode to joy, You Can't Roller Skate in a Buffalo Herd, a song that insists "you can be happy if you've a mind to." Then, with our list of 2015 resolutions in hand, we "knuckle down, buckle down, do it, do it, do it!" Among the many movies with key moments played out over the New Year holiday is the beguiling Jon Turteltaub feature that confirmed Sandra Bullock's star power, While You Were Sleeping (1995).

Friday, April 21, 1995.
WHILE YOU WERE SLEEPING. Written by Daniel G. Sullivan and Fredric LeBow. Music by Randy Edelman. Directed by Jon Turteltaub. Running time: 103 minutes. Mature entertainment with the B.C. Classifier's warning: occasional swearing. WHAT IS JACK CALLAGHAN (Bill Pullman) to make of Lucy Eleanor Moderatz (Sandra Bullock), the cute-as-anything Chicago Transit Authority fare seller who saved the life of his older brother Peter (Peter Gallagher)?
"She's great," says his kid sister Mary (Monica Keena). "You're going to love her."
He does, too. In While You Were Sleeping, director Jon (Cool Runnings) Turteltaub's winningly contrived romantic comedy, Jack loves her from the moment he sets eyes on her.
This is a problem because Lucy is engaged to Peter, who is in a coma, the result of a Christmas Day fall from the platform of an elevated train station.
It ends up being a wonderfully comic problem, because Lucy's "engagement" is actually the result of an emergency room misunderstanding, one that the lovely, lovelorn young woman wishes were true.
What are we to make of Sandra Bullock, the cute-as-anything actress who has suddenly become America's new sweetheart? Is the Virginia-born brunette a true trend-setter or just another feature-film flavour of the week?
Well, I think she's great.
No California girl, the tiny, perfect performer exudes heartland charm and old-fashioned wholesomeness, all without being silly, sappy or stupid. Hard-working – she's been in 10 features in the last five years – Bullock combines intense likeability with a commanding screen presence.
Her specialty is the self-reliant working girl who quietly aspires to personal completion in a traditional relationship. A dark-haired Doris Day – yes, she can sing – she's neat, normal and so gosh-darn nice.
On screen, Bullock manages to be vulnerable, and even innocent, without sacrificing capability or intelligence. Her talent became apparent in 1993 opposite such powerhouse co-stars as Robert Duvall (in Wrestling Ernest Hemingway), Sylvester Stallone (in Demolition Man) and that Santa Monica InterCity Express bus (in 1994's Speed).
After Hollywood's flirtation with such aggressively sexual warriors as Sharon Stone (who kept an ice pick under her pillow in 1992's Basic Instinct) and Demi Moore (trading sexual threats for success in 1994's Disclosure), Bullock is the non-neurotic, conventionally erotic woman who asks men the Rodney King question: "Can't we all just get along?"
Under Turteltaub's direction, her Lucy is the attractive centrepiece of an old-fashioned, Sleepless in Seattle-like romance. Anyone who's seen the theatrical trailer already knows the whole story.
The pleasure is in seeing it played out. Like Rob (When Harry Met Sally . . .) Reiner, Turteltaub is the son of a successful television producer, a young man who's made a smooth entrance into the family business.
A gentle, positive feature, his While You Were Sleeping serves up its domestic crises with warmth and good will to almost all of its characters. On New Year's Eve, as Lucy realizes that she really loves down-to-earth Jack, Peter wakes up . . .
In her first above-the-title starring role, Bullock is surrounded by such effective veteran performers as Jack Warden, Peter Boyle and Glynis Johns. Working within the ensemble, she demonstrates that she has the power to hold her own and carry a feature.
Like her? You're going to love her.

Afterword:  For a time, it seemed like Sandra Bullock was destined to co-star opposite public transit: in her 1994 breakthrough feature Speed, she drove a bus; in While You Were Sleeping, she works for the CTA; in 1995's The Net, she navigated the information superhighway. Using her obvious intelligence, she built upon her lovability — at full strength in the two Miss Congeniality pictures (2000, 2005) — to become People magazine's 2010 "Woman of the Year." That same year, Time magazine included her among its "Most Influential People in the World." Within the entertainment industry, she made the Hollywood Reporter's 2013 list of its "most powerful women." Bullock won an Academy Award for her dramatic, off-type role as Anne Tuohy in 2009's The Blind Side. She won my own personal Miss Maple Leaf award for her portrayal of Margaret Tate, the hard-driving New York ad executive in 2009's The Proposal. Faced with deportation to her native Canada, Tate demands that her American assistant, played by Vancouver-born Ryan Reynolds, marry her. Who could possibly refuse?
Though Sandra is the star, While You Were Sleeping reminded me of the pleasures of Christmas with Glynis. One of the sound era's first movie mermaids (in 1948's Miranda), British screen star Glynis Johns played the Callaghan boys' grandmother Elsie. Though she celebrated her 91st birthday last October, 1995's While You Were Sleeping was her second-to-last feature film appearance. A year earlier, she'd been to Christmas dinner at the Chasseurs, the feuding family in Ted Demme's tart seasonal comedy The Ref (1994).