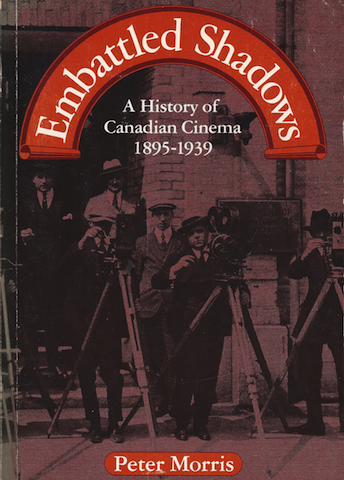 First published in 1978 and reprinted in 1992, EMBATTLED SHADOWS remains essential reading for anyone interested in Canadian film.

We did it our way


One way to mark National Canadian Film Day (April 19) is to take in a free screening of a made-in-Canada movie. Another is to learn more about filmmaking in this country, a subject first explored in detail by scholar Peter Morris, author of the ground-breaking 1978 history Embattled Shadows.

EMBATTLED SHADOWS: A HISTORY OF CANADIAN CINEMA 1895-1939. By Peter Morris. McGill-Queen’s University Press, 1978. 349 pp. Illus. $7.95 (paperback). CANADA'S FILM HISTORY may well be unique.
While other nations were  developing centralized, largely monopolistic industries, Canadian movie production remained regional.
When other nations realized that Hollywood threatened their domestic markets, their governments moved to protect producers, distributors and exhibitors. The Canadian government, by contrast, ignored the American takeover, allowing control of the entire industry to slip away to New York and Los Angeles.
According to Peter Morris, “the particular shape of Canadian film history is derived from the general economic and cultural history of the society itself.” Lacking any clear-cut sense of identity, we chose  “an approach which seemed best suited to the Canadian spirit.”
Morris, currently teaching at Queen’s University, is Canada's most visible academic film historian. Although he’ll never be a popularizer, his Embattled Shadows (McGill-Queen’s University Press; $7.95 in paperback) is a valuable pioneering work, the first serious attempt to chronicle our cinematic story.
English-born, Morris developed his interest in film while doing graduate work at the University of British Columbia. A doctoral candidate in chemistry, he joined the newly-formed Cinema 16, serving as its president during the student-run film society's second season in 1961.
He abandoned the sciences to go to work for the Ottawa-based Canadian Film Institute. In 1965, he published Canadian Feature Films 1914-1964, an annotated index that attempted to catalogue a half-century of domestic movie production.
(Expanded, corrected and updated, his feature film index now consists of three volumes. Part One and Part Two by Morris cover the years 1913-1963. Part Three, by Piers Handling, covers 1964-1969.)
While curator of the CFI’s film archives, Morris was responsible for the translation, editing and updating of two works by French film historian Georges Sadoul. Published in 1972, they were the Dictionary of Film and Dictionary of Fim Makers. That same year, he published his own Shakespeare on Film, an index to movie adaptations of the British bard’s plays.
With Embattled Shadows, Morris breaks new ground. An exhaustive survey of the Canadian cinema scene from 1895 to 1939, it is his first truly important work.
Professorial rather than dramatic in his approach, Morris leads us through a wealth of research. Although his scope is national, he has unearthed numerous nuggets of particular interest to British Columbians. Among them:
◼︎ Vancouver was the site of Canada's first permanent movie house (1902).
◼︎ B.C. was the first Canadian province with a government involved in filmmaking (1908).
◼︎ B.C. once legislated that provincial movie houses had to show B.C.-made subjects on their programs (1920).
◼︎ A Victoria-based film studio produced 14 feature films between 1932 and 1938.
◼︎ During the1920s, Vancouver and Victoria led all of Canada in movie-related stock swindles.
Among the fascinating folk who people Morris’s narrative are two B.C. women. One, named May Watkis, was the first director of the provincial government’s Education and Patriotic Film Service, a production unit established in 1919. (It was her films that B.C. legislated into its theatres.)
The other, Victoria-born Helen Foster Barham, was known professionally as Nell Shipman. An actress, writer, producer and director, Nell was world-famous as “the girl from God’s country.” In Back to God’s Country (1919), she was also one of the first screen stars to play a nude scene.
Morris’s book — 242 pages of text, 50 pages of notes, 30 pages of appendices including a title and general index — may be a bit too ponderous and a bit too specialized for the best-seller lists. It is, though,  essential reading for anyone with an interest in Canadian film.

The above is a restored version of a Province book review by Michael Walsh originally published in 1979. For additional information on this archived material, please visit my FAQ.

Afterword: Remembered as “the first person to bring together an analysis of Canadian cinema with Canadian history,” Peter Morris