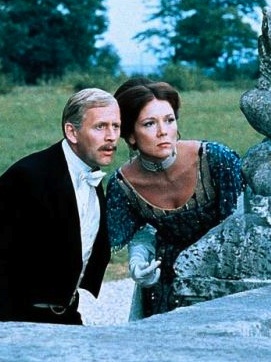 During a weekend in the country as guests on the Armfeldt estate, Frederick Egerman (Len Cariou) and Charlotte Mittelheim (Diana Rigg) make discoveries about love in director Hal Prince's 1978 feature A Little Night Music.

Weekend in the country


It was on this day — well, last night (August 10) really — in 1787 that Wolfgang Amadeus Mozart composed his Eine Kleine Nachtmusik (A Little Night Music, known to musicians as Serenade No. 13 for strings in G major). A perfectly charming chamber piece, I like to think that it was a favourite of filmmaker Ingmar Bergman, whose love of Mozart is evident in every frame of his 1975 adaptation of Mozart's popular opera, The Magic Flute. Before becoming famous as the most sombre Swede, Bergman celebrated the magic of the late evening in his lightest romantic comedy, Smiles of a Summer Night (1955). As befits a tale of confused lovers, it takes place on Midsummer's Eve, the shortest night of the year. Its frothy sophistication inspired Bergman's Brooklyn-born disciple Woody Allen to make his A Midsummer Night's Sex Comedy (1982), which was just sophomoric. Fortunately, Bergman had already inspired a genuine sophisticate, Broadway composer and lyricist Stephen Sondheim, who collaborated with writer Hugh Wheeler on a musical adaptation. Recalling Mozart in its title, A Little Night Music premiered in 1973 and went on to win every theatre award in sight. It was directed by Harold Prince, who brought it to the screen in 1978.

Monday, May 15, 1978.
A LITTLE NIGHT MUSIC. Written by Hugh Wheeler. Suggested by Ingmar Bergman's 1955 feature film Sommarnattens leende. Music and lyrics by Stephen Sondheim. Directed by HaroId Prince. Running time: 124 minutes. Mature entertainment.
MUSICAL INSPIRATION MUST BE a little like demonic possession. Some ideas will not be denied, and composers are forced to take chances. Stephen Sondheim took a long one in the development of A Little Night Music. The results are both witty and enchanting.
His inspiration was as unlikely as any — a 1955 Ingmar Bergman comedy called Smiles of a Summer Night, the story of a number of mismatched lovers who sort themselves out one magic evening around 1900. It is the lightest, least depressing picture Bergman ever wrote.
At its heart, it is the story of Desiree Armfeldt (Elizabeth  Taylor), a middle-aged actress who is growing tired of life on the road. She is also tired of her current lover, the vain, pompous Count Mittelheim (Laurence Guittard), a dragoon who is already married to a long-suffering wife, Charlotte (Diana Rigg).
Enter Frederick Egerman (Len Cariou). A  middle-aged lawyer with a grown son, he knew Desiree 14 years earlier. A  widower, he has recently married Anne (Lesley-Anne Down), a girl no older than his own boy, Erich (Christopher Guard).
The two old lovers become reacquainted when Desiree's troupe plays his town. Then and there, the actress decides that Frederick will make a fine father for her illegitimate offspring, a lovely 14-year old daughter named Fredericka (Chloe Franks).
And so the machinations begin.
For his musical version, first produced on Broadway in 1973, Sondheim (and book writer Hugh Wheeler) made a few structural changes. Desiree's unseen son became a very visible daughter. A subplot involving the Egerman maid and the Armfeldt groom has been all but eliminated.
There's no harm done, though. Sondheim merely blurs Bergman's hard edges to emphasize the Edwardian elegance, sentiment and romance. In this regard, his instincts are sharp and true.
Rather less inspired is director Hal Prince, whose uncertainty with the movie medium makes the final result something less than perfect. Although his opening is borrowed from Bergman's recent hit, The Magic Flute, what he's after is something akin to the famous ''Lubitsch touch'' — high spirits with just a whiff of wickedness.
Sondheim provides all the right moods in his score. He's written 10 musical mini-dramas — to call them songs hardly does them justice — that recall the golden age of musical theatre, a time when plot and score were so interwoven that they formed a seamless artistic fabric.
In casting his film, Prince gave in to the recent film practice of picking performers who can't sing. Taylor, who is both effective and moving as Desiree, is mostly  off-key, something that's particularly apparent in the picture's poignant finale, "Send in the Clowns."
Singing voices aside, the ensemble playing is as it should be: crisp and professional. Rigg, with her arch comic timing, plays off beautifully against Down's knowing innocence.
The standout, though, is Winnipeg's Len Cariou, reprising the role he played on Broadway. He scores solidly as both an actor and singer, and richly deserves this shot at international stardom.
Overall, it doesn't work as well as it could. Prince's nervous, jump-cut style fails to solve the basic visual problems posed by Sondheim's intricate, interlaced lyrics. His rhythms are often at odds with the composer's marvellous, melodious score.
On the plus side, it is a real, honest-to-God musical. Considering how many hastily conceived record albums are being passed off as movies these days, we should all be thankful for A Little Night Music. It is a joyous recollection of bygone days.

Afterword: In my favourite moment from Hal Needham's country-and-western comedy Smokey and the Bandit (1977), runaway bride Sally Field is desperately trying to make conversation with truck driver Burt Reynolds. "Do you know who I think has really revolutionized the American musical theatre?" she says. "That's Stephen Sondheim." She's not wrong. What remains a mystery to me, though, is why so few of his major Broadway works have been made into feature films. His earliest movie credits are as a lyricist, when his collaborations with composers Leonard Bernstein (West Side Story) and Jule Styne (Gypsy) came to the screen in 1961 and 1962. The first fully Sondheim work to be filmed was 1962's A Funny Thing Happened on the Way to the Forum, energetically directed by Richard Lester in 1966. Harold Prince's adaptation of A Little Night Music arrived in 1978. For the next 30 years, there were some six made-for-TV movie adaptations — pictures almost as ephemeral as the stage productions — followed by 2007's Tim Burton Sweeney Todd: The Demon Barber of Fleet Street (with Johnny Depp in the title role). Coming for Christmas 2014 is Chicago director Rob Marshall's adaptation of Into the Woods, with Johnny Depp as The Wolf and Meryl Streep as The Witch.