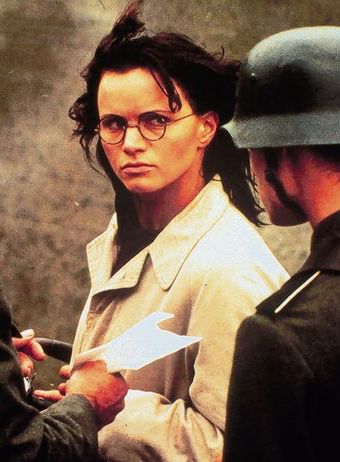 A tale of tragic choices


Defending justice outside a classroom


On this day (April 17) in 1945, the 24-year-old Dutch resistance fighter Hannie Schaft was executed by the Gestapo. Her story, a tale of emotional growth and urban guerrilla warfare, is told in director Ben Vergon’s 1981 historical drama The Girl with the Red Hair.

HET MEISJE MET HET RODE HAAR (The Girl with the Red Hair). Co-written by Pieter De Vos. Based on the 1956 biography by Theun De Vries. Music by Nicolai Piovani. Co-written and directed by Ben Vergon. Running time: 116 minutes. Mature entertainment with the B.C. Classifier's warning: some violence. In Dutch with English subtitles. IN LATE 1942, HANNIE Schaft (Renée Soutendijk) dropped out of law school. "I have a choice," The Girl with the Red Hair tells her professor (Jan Retel), " . . . words or action."
In early 1945, Schaft is in the hands of the Gestapo, and Dutch authorities are faced with another kind of choice. Should they save one of Holland's known resistance fighters, or leave her to Nazi justice?
It was no simple matter, writer-director Ben Vergon suggests in this unsentimental Second World War drama. In two years, Schaft had changed from a patriotic member of the Amsterdam underground into a remorseless terrorist assassin.
Vergon introduces us to an idealist. "You have taught me about Justice," she says to her professor. "It can't be defended in the classroom alone."
Later, her motives become confused. When she is tested by Hugo (Peter Tuinman), a handsome resistance leader, she encounters a man with a low opinion of female agents. To prove herself, she must put aside her finely developed sense of justice and learn to kill.
To underscore the emotional bleakness of German-occupied Holland, Vergon has drained most of the colour out of his visual images. Schaft is a figure in a wintry landscape, a rain-streaked, shadowy world in which flesh tones are bleached a sepulchral white.
Scoring a personal triumph in the title role is actress Soutendijk, remembered locally as the trashy street seductress in Paul Verhoeven’s 1980 drama Spetters, and currently [1984] on view as the Dutch director’s classy Lilith figure in The Fourth Man.
Unlike either of those is her portrayal of Schaft, the intense, inexperienced schoolgirl who is an ember of angry fervour glowing in a grey-green historical moment.
Like writer-director Jeremy Paul Kagan, whose 1975 telefeature Katherine starred Sissy Spacek as a Patty Hearst-like urban guerrilla, Vergon is examining his subject's state of mind rather than her politics. In The Girl with the Red Hair, he offers us a tale of tragic choices.

The above is a restored version of a Province review by Michael Walsh written in 1984. For additional information on this archived material, please visit my FAQ.

Afterword: Girls with red hair enjoy a special place in the popular culture. Cleopatra, for example, one of only three women to be named in the title of a Shakespearean play, is said to have dyed her hair red. Boudica, the subject of a 2019 big screen epic, was a legendary warrior queen, the leader of her Celtic tribesmen against the Romans in 1st century Britain. She came by the colour naturally, as did the Tudor era’s Elizabeth I, easily the cinema’s favourite monarch. The list of actresses who have played England’s virgin queen goes on for pages.
Nor can we forget the generations of kids who’ve delighted in the adventures of literary icon Anne Shirley, celebrated in Lucy Maud Montgomery’s Anne of Green Gables novels. Along with her feisty Swedish cousin Pippi Longstocking, Anne (with an “e”) has been the inspiration for movies, TV shows and even theme parks. And then there’s Nancy Drew (whose “titian” locks have a story all their own), currently being played by Kennedy McMann in a made-in-Vancouver TV series that has become one of my guilty viewing pleasures.
Now, if I’m being personal, I have to admit that my own favourite movie redheads include Judy Garland (as Dorothy Gale in 1939’s classic The Wizard of Oz), Susan Sarandon (Janet Weiss in 1975’s The Rocky Horror Picture Show) and Kathleen Turner (the voice of Jessica Rabbit in 1988’s Who Framed Roger Rabbit?). I was less impressed by Brigitte Nielsen’s performance in 1985’s Red Sonja, but it’s impossible to ignore the progress of the “she devil with a sword” from 1930s pulp novel heroine to Conan the Barbarian’s female counterpart in a 1970s comic book series, to her own feature film. Memorable television gingers include Gillian Anderson (Dana Scully on The X-Files) and Alyson Hannigan (Buffy the Vampire Slayer’s best friend Willow Rosenberg).
Not among my favourite redheads is Natasha Romanoff, introduced as the Soviet spy Black Widow in a 1964 Marvel Comic. A cold-war stereotype with a chequered background, she eventually finds redemption as an agent of S.H.I.E.L.D. and member of the Avengers superhero team. Scarlett Johansson has played the role in some seven Avengers movies to date. Which brings us to the even more fraught tale told in the 2018 feature Red Sparrow, a frightening throwback to boilerplate cold war spy fiction of the 1960s. In it, Jennifer Lawrence plays an often-red-haired ballerina trained in the art of “sexpionage” in contemporary Russia. Unpacking its underlying social and political assumptions is just plain icky.
As it turns out, Girl with the Red Hair Hannie Schaft was much honoured in the immediate aftermath of her war. She then fell from favour as the cold war set in, and her communist connections became an embarrassment to the Netherlands, one of the founding nations of NATO. In 1956, the publication of Theun De Vries’s biographical Het meisje met het rode haar started the slow process of rediscovery. In 1982, Holland’s Queen Juliana unveiled a bronze memorial to her in Haarlem, Schaft’s birthplace. That city now remembers her annually with a commemorative ceremony on the last Sunday of November.