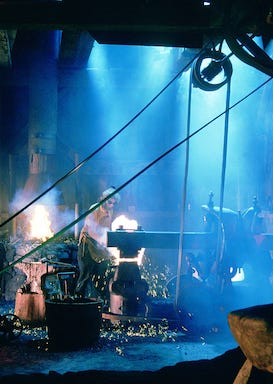 
Best remembered as “Father Goose,” the inspiration for the 1996 feature Fly Away Home, William Lishman was born on this day (February 12) in 1939. His earlier fame as an artist and sculptor is celebrated in director Stephen Low’s 1990 IMAX 3D documentary short The Last Buffalo.

Monday, January 28, 1991.
THE LAST BUFFALO. No writer credited. Music by Eldon Rathburn. Directed by Stephen Low. Running time: 27 minutes. General entertainment with no B.C. Classifier’s warning.
THE ART IS IN making the connection.
Sculptor William Lishman connects art and nature. In his 19th-century studio, he operates a smithy, forging life-sized impressions of birds and beasts.
Filmmaker Stephen Low connects art with technology. Using the IMAX 3D camera system, he records images with unequalled depth and clarity, resulting in the screen's most effective simulation of reality ever.
Together, they've produced The Last Buffalo, a film that Low calls "the beginning of the next stage in the history of the cinema." A stunning advance, their picture actually lives up to that apparent hyperbole.
Offering a wordless portrait of an artist and his inspiration, the 27-minute special presentation is a work of big-screen poetry very much in the tradition of the Pre-Raphaelite Romantics. Inside Lishman's smithy, we have a sense of being present at Creation.
In the darkness, ancient machinery pounds, fires roar, sparks fly and molten metal flows, all calling forth atavistic images of European mountain gods — Thor, Haphaestus or Vulcan.
Outside, in the New World beyond, Low's camera finds the nature to which the artist pays tribute. He presents us with privileged wilderness views that recall the more recent tradition of Disney True Life Adventures.
Here, though, there is another dimension — the third.
Fitted with a pair of polarized glasses, filmgoers are seated at the edge of a stage upon which, an arms-length away, a new-born buffalo calf stands.
Remember how Hollywood's first 3D feature, 1952's Bwana Devil, promised "a lion in your lap"?
Low, perhaps with a touch of nostalgia for that pioneering film, introduces us to a North American mountain lion. We watch it leap from rock to rock until, in fulfilment of that old advertising promise, it leaps into our lap.
Low's real achievement, though, goes beyond the stock shocks and the poke-em-in-the-eye philosophy of his cinematic forebears. In The Last Buffalo, he shows us how depth vision can be intimate and personally involving.
He shows us a process that allows us to contemplate the texture of an eagle's wing, or share a trout's eye-view of sunlight glinting on the surface of a mountain stream.
A landmark in the marriage of art and motion picture technology, his film can currently be seen in the world's only permanent IMAX 3D theatre, the CN IMAX Theatre at Canada Place [in Vancouver].

Afterword: The CN IMAX Theatre at Canada Place was the venue where the first film shot in IMAX 3D made its debut. Director Colin Low's Transitions was one of the cinematic highlights of Vancouver's Expo 86. In 1990, "the world's only permanent IMAX 3D theatre" was a popular tourist attraction. Nothing lasts forever, though. In October 2009, after 23 years in service, it was closed.
Colin Low's son Stephen currently has 18 IMAX titles to his credit, including seven in the 3D format. The subject of his first stereoscopic film, artist William Lishman, first gained fame as a sculptor, one who specialized in repurposing metal salvaged from discarded items. (Among the most renowned of his works was the 26.2 m (86 ft) “Transcending the Traffic” tower that dominated the Land Plaza at Vancouver’s Expo 86.) It was this aspect of of his creative career that Low celebrated in The Last Buffalo.
In the mid-1970s, Lishman shifted his focus, taking up the challenge of ultra-light aviation. This, combined with his interest in geese, resulted in his becoming the first person to lead a flock of the birds with an aircraft, and then the first to lead them on a migratory flight. Recalled in his 1992 autobiography Father Goose and His Goslings, these moments were the inspiration for Fly Away Home, director Carroll Ballard’s 1996 feature film that starred Jeff Daniels as its Lishman-like hero.
As with most movies “based on a true story,” the filmmakers took considerable liberties with their storyline. The Daniels character, rural artist Tom Alden, is a widower attempting to reconnect with his estranged daughter Amy (Winnipeg-born Anna Paquin). In real life, Lishman and his wife Paula were together for 49 years, a marriage that ended with his death in 2017. They had two sons and a daughter. Ballard did go to the trouble of shooting his movie in rural Ontario. Among its sets was the blacksmith shop constructed for the filming of The Last Buffalo on Lishman's Purple Hill property. And, because the film’s producers couldn't insure their star performer for the dangers of ultra-light flight, Lishman acted as Daniels’s stunt double, playing the character based on himself.

The Low down: Other IMAX films in the Reeling Back archive directed by Stephen Low are the feature-length documentary Titanica (1992), the Expo 85 documentary short Skyward and the 1988 OMNIMAX short Beavers.